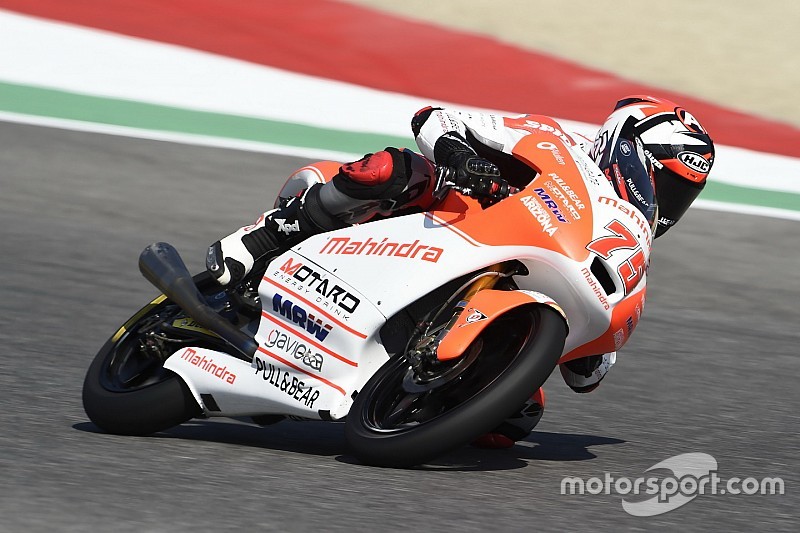 Mahindra Aspar’s Albert Arenas will sit out of the Barcelona round of Moto3 Championship following an injury sustained in Mugello.

Arenas fell off the bike during the final lap at the Italian circuit, suffering a Grade 5 left side acromioclavicular dislocation.

The Spaniard underwent a surgery this morning, ruling him out of his home race. He will begin the recovery process next week and there is no word on his participation in the Assen race, which is scheduled on the weekend of 23-25 June.

"It's a shame to miss my home race, but right now I'm thinking about recovery,” he said. “We were in a good moment, after the race in France I felt strong and in Italy I was confident that I could do well.

“As I said, the injury is a shame, especially as it comes during a period when there are many races in a row, but it will be a setback that will simply make us stronger."

Arenas’ absence will mean Lorenzo Dalla Porta will be the sole Mahindra Aspar rider this weekend, with the outfit not announcing a replacement for the Spaniard.

Dalla Porta has a strong record in Barcelona, having secured a double win at this venue last year in the CEV Moto3 Junior Championship.

"I really like the Barcelona-Catalunya circuit and I also have a good memory of it,” he said. “Last season I got two victories in the Junior World Championship there and that gives me even more desire to do well and to start to finishing races in the points."