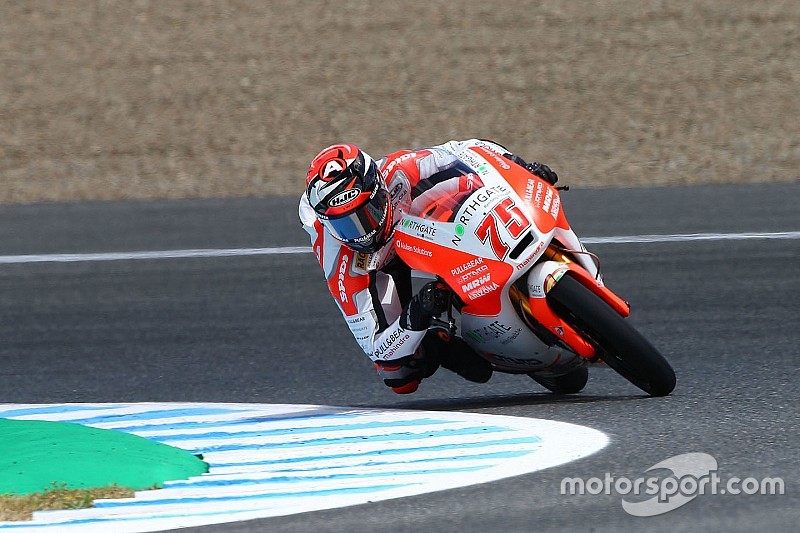 Mahindra says it will “continue working” to re-emerge as a top 10 Moto3 finisher after Albert Arenas secured the Indian manufacturer’s first points of the season in Jerez.

Mahindra has endured a difficult start to the year, with neither of its three teams scoring points in the opening flyaway races of the season.

But Arena’s 14th place finish in Jerez has brought optimism for the squad, with CEO Mufaddal Choonia stating that his next target is to finish inside the top 10.

“It seems that this weekend we have taken a small step forward and broken into the points,” he said.

“It was good to see Albert’s strong and consistent pace in the race, and he would have got a better result if he hadn’t been mugged by the same rider who seems to have an affinity for Mahindra riders.

“Now we hope to keep improving, and we’ll continue working to put Mahindra where we need to be, well up into the top ten and with more to come.”

Arenas himself was pleased with his performance, but felt a better result would have been possible had it not been for a late race incident that almost led to his retirement.

“After a really good Warm Up we were confident of having a good race, aiming to stay in the first group.

"It was really difficult because we haven’t done this yet but we still tried. In the first lap the group was broken and we just tried to keep our pace to stay at the head of the second group.

"It was good to gain these first points for me and for Mahindra, now it’s important to continue in this way. But it’s a shame, I had an incident in the last corner with another rider when I was 12th.”

Lorenzo Dalla Porta could have secured a double points finish for Aspar Mahindra, but his performance tailed off towards the end of the race .

"I had a strong first few laps, I was happy and I was convinced of what I could do,” he said after the race.

“However, after a few laps, I noticed a drop in my fitness and could no longer do what I wanted on the bike, starting to lose touch.

“I tried to stick with the next group back, but it was not going well, as I lacked some endurance. The bike was going very well in the race, especially the chassis.

“It’s a shame, but now it's time to train even harder and see what we can get at the next few races."