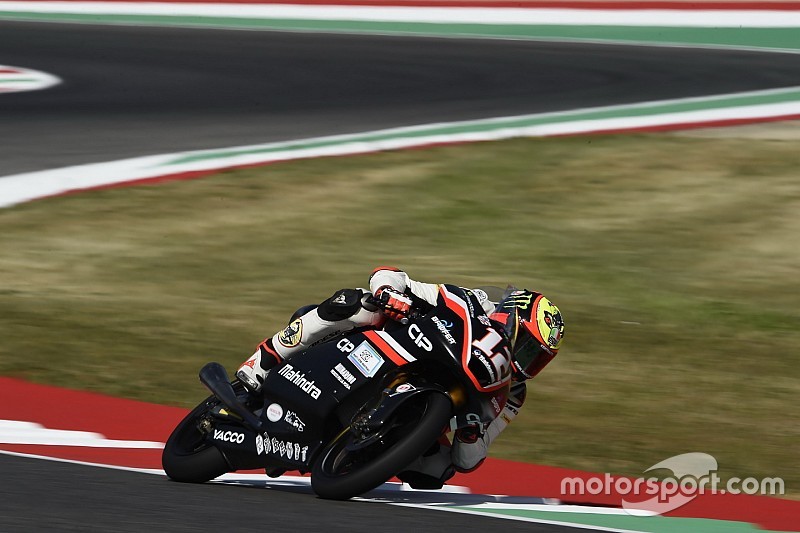 Mahindra Racing boss Mufaddal Choonia felt his squad was “unfortunate” to miss out on a points finish in Mugello, describing the race as a “lottery.”

The long straights that characterise the Italian circuit amplified slipstreaming, meaning positions changed every few corners depending upon the tow riders got.

Mahindra riders came off worse because of this aerodynamic effect, with factory-supported Aspar rider Lorenzo Dalla Porta finishing 19th after running in the points for much of the race.

The Italian was beaten to the finish line by CIP’s Marco Bezzecchi, who gained four places on the final lap to finish as the top Mahindra rider in 17th.

Given that the top 19 finished within 2.3s of each other, Choonia believes bad luck, rather than lack of pace, was the reason behind Mahindra’s first non-score in three races.

“So close, and yet so far,” The Indian lamented. “It was a classic Mugello race with a big pack of riders all together.

“Frankly, when it is like this, finishing positions are a bit of a lottery. We are happy with the pace our riders showed, with fast lap times and staying with the lead group.

"It is just unfortunate they were not in the top 15 past the chequered flag.”

Dalla Porta, on the other hand, felt Mahindra’s top speed deficit to Honda and KTM bikes put it on backfoot at Mugello.

"It was a shame to end the race, because here at home I felt that little extra that the fans give you,” the Italian said.

“However, the Mahindra engine just did not have the power to allow us to fight for greater things today. I hope Mahindra will continue to work to give us the tools we deserve."

Arenas to undergo test after injury

Mahindra Aspar’s Albert Arenas was also in contention for a points finish until he crashed out on the final lap, suffering from a fourth degree acromioclavicular dislocation.

The Spaniard will undergo an MRI scan in Barcelona which will determine if he requires a surgery to treat the injury.

"I'm fine, it was a hard knock and everything hurts a little bit, but I'm fine,” he said.

“Now it's time to get to Barcelona, to get an MRI and to check exactly what it is because I took a heavy blow to the shoulder.

"From there, we'll have to wait to see how it evolves and hope to recover as soon as possible.

“Anyway, I leave Mugello with good feelings, I liked the circuit a lot, I felt good and it was a very hard race.