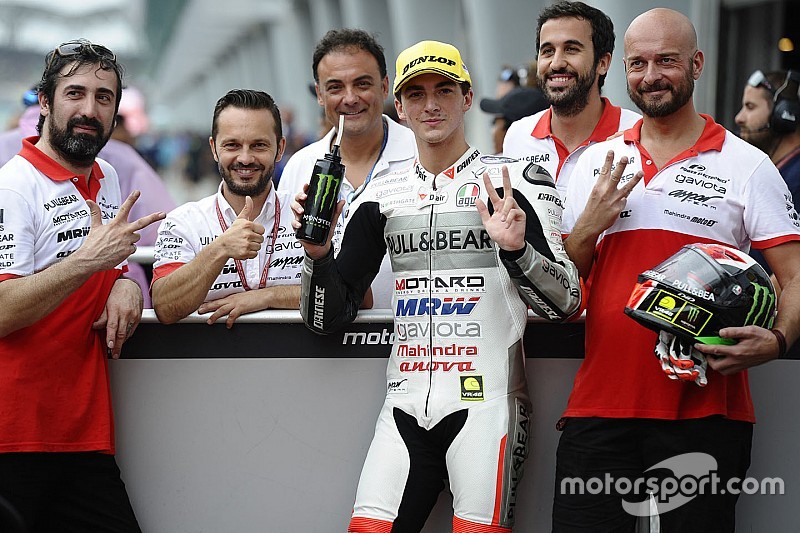 Aspar Mahindra’s Francesco Bagnaia scored his second win of the Moto3 season in Malaysia in a crash-filled red flagged race, which saw no fewer than 14 riders retire.

The Italian took the lead of the race after a crash at Turn 7, which took out the leading group of Brad Binder, Joan Mir and Lorenzo dalla Porta.

It was then a case of keeping the advantage in check for Bagnaia, as the tow was broken to the chasing pack. He extended the lead lap-by-lap over his closest challenger Jakub Kornfeil, eventually being classified seven seconds clear.

While Bagnaia was up ahead in distance, the battle for second heated up, with Kornfeil having to fend off Bo Bendsneyder and Fabio Quartararo.

But the race came to an abrupt red-flag end as drizzling rain returned, and Maria Herrera crashed at the final corner on Lap 15.

That confirmed Bagnaia his second win of the season, which moves him up to third in the standings. It was also the Indian manufacturer Mahindra's third win of 2016.

With the results taken on Lap 13, even though Bendsneyder took second on track, the KTM rider was moved back to third behind Kornfeil.

It was Bendsneyder's second podium of the season, and the first for Kornfeil for the Malaysian Drive M7 SIC Racing Team.

Behind, Quartararo was fourth as Andrea Locatelli rounded off the top five. Marcos Ramirez for the second race in succession scored points with a sixth place finish.

Gabriel Rodrigo was seventh, having been involved in the lead battle at the initial stages of the race, before falling off the pace.

Only 17 finishers after incidents

The race saw several crashes much like last weekend’s race in Australia. The first lap took out eight riders, with a few retiring immediately.

At first, it was Andrea Migno who crashed into Juanfran Guevara, with Enea Bastianini's replacement Ayumu Sasaki also retiring.

Further ahead in the lap, there was a major incident when Jorge Martin high-sided and lost control of his bike, causing a chain reaction collision that took out Aron Canet, Philipp Oettl, Adam Norrodin and Niccolo Bulega.

While Norrodin continued, he had another incident at Turn 7 later on in the race which saw 2016 champion Binder, Mir, dalla Porta and Fabio di Giannantonio all bizarrely sliding out in the same corner.

Binder, dalla Porta and di Giannantonio continued, with the latter scoring a point by finishing 15th.

Meanwhile, Martin, Bulega, Norrodin and Oettl were taken to the medical center for precautionary checks.