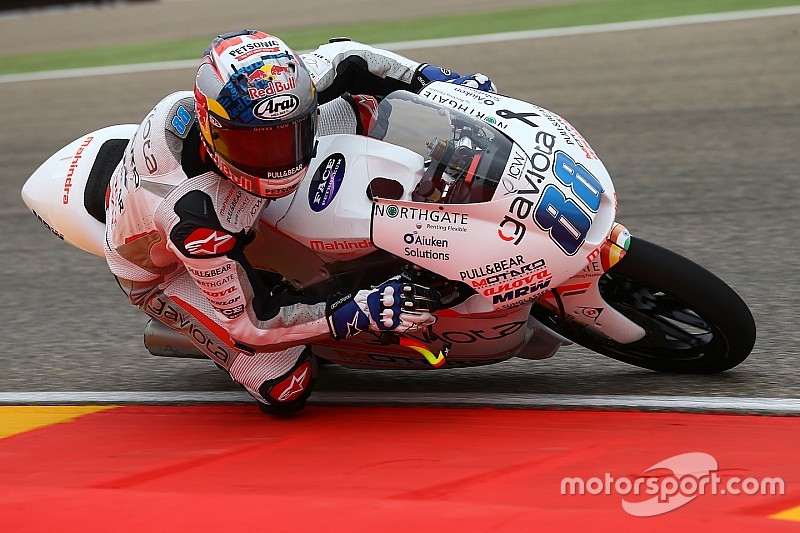 Jorge Martin believes Aspar Mahindra has more pace and can improve in the Moto3 race at Aragon, on Sunday.

The Spanish rider returned from foot injury after missing the last race in San Marino to finish 11th in qualifying, the lead Mahindra rider.

Despite unable to break into the top 10, Martin reckons the MGP3O can better its qualifying performance in the race.

"The foot was OK. I don’t have any pain so I am happy with that," Martin said. "Let’s see in the race if I can manage the pain well and finish it.

"It was difficult to set a fast lap time in this heat and traffic, we suffer quite a lot and I am losing a lot of time on the back straight, which is a critical sector for us.

"I think we can improve tomorrow and fight in the group but today I had to try and find a perfect lap, with slipstreams, and even though I wasn't fast I set a decent time," he added.

"I’m happy with 11th. Hopefully it is a group race so that I can make the most of our speed in the first three sectors and then hang in to fight with the guys at the front.”

Teammate Francesco Bagnaia had a much more difficult session, finishing only 21st, but the VR46 rider feels the bike will be stronger in the race.

The Italian will start from 20th after penalty to Niccolo Antonelli - agreed with Martin that they need to find time in the final sector through tow.

McPhee leads rest of the pack

The lead CIP of Tatsuki Suzuki was 25th, while Platinum Bay duo of Darryn Binder and Marcos Ramirez were 28th and 29th respectively. Both will move one place up to 27th and 28th after penalty to Jakub Kornfeil.

The second CIP of Fabio Spiranelli finished 31st but will drop to 34th, aiding Team Italia duo Stefano Valtulini and Lorenzo Petrarca to move to 31st and 32nd.

The Indian manufacturer's final rider was Mexican wildcard Gabriel Martinez-Abrego in 34th, who is to start his first world championship race at 33rd.