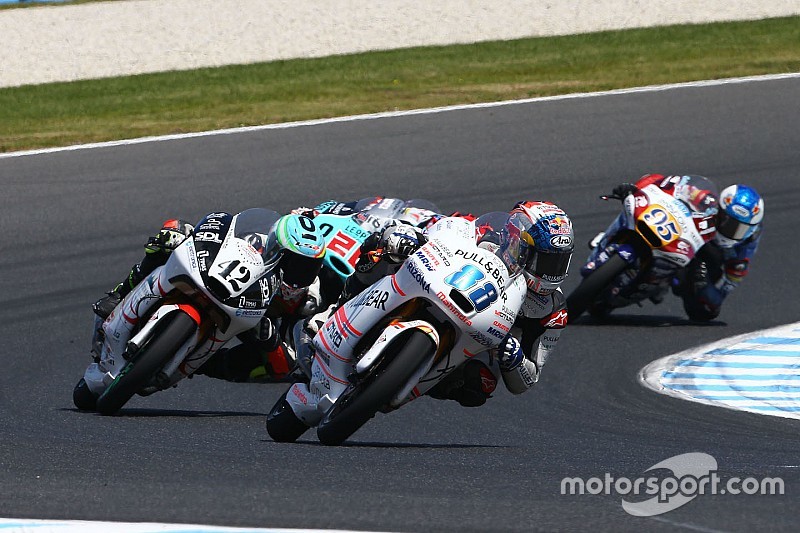 Having fought hard for a top six finish in Phillip Island's Moto3 race, Aspar's Jorge Martin believes the Mahindra bike had the potential for rostrum position.

The Spanish rider ended sixth, 0.156s behind third placed Aron Canet amid the battle for the final podium position during a shortened 10-lap race.

Earlier, Martin dropped positions at the original start after surviving a fall on Lap 1 and later on his luck turned worse when his bike stalled on the grid for re-start, throwing him back of the field.

"In the first race I was involved in a fall, luckily I did not go down, but dropped to last. After the second crash, I helped Jorge Navarro to get to the pits but this burned my clutch," he said.

"We changed it, but on the grid I stalled the bike and we had to start from the back. It's a shame, because I've came to fight for third despite starting last.

"But sixth position gives us more points. I gave the maximum, I knew I could be at the front and that if we had a better start I could have run with the first two, but with the slipstream has been very difficult to catch them," he added.

Teammate Francesco Bagnaia was unfortunate with the crash after he was tagged by Fabio di Giannanntonio, who himself made contact with Gabriel Rodrigo - while fighting for the race lead.

"I went down because there are unconscious riders in Moto3. I hope that race direction take note of this because it is the third time that it has happened to me with a rider of the same team," he said.

Peugeot's McPhee like Bagnaia was running in the top half at the start when he was involved in a major incident, bringing out the red flag.

The British rider lost control of his MGP3O and fell down, with Enea Bastianini and Andrea Migno unable to avoid the crashing McPhee.

"The doctors [at Turn 11] diagnosed a slight concussion and a broken thump to his left hand," team statement said.

"Following the first examination McPhee was lifted to the St. Kilda Alfred Hospital in Melbourne for further checks and CRT. He will miss the Malaysian Grand Prix in one week."

The younger brother of world champion Brad, was on course for his maiden rostrum finish, only to be pipped on the finish line by 0.048s by Canet.

This result came after Binder had suffered a fall on Lap 1 during the original start. "I thought my race was over [when I crashed on Lap 1].

"I picked my bike up and kept going. When the red flag came out I thought, 'Maybe this is my chance.' Fortunately enough I got to the front and thought that no one would get past me before the line.

"Canet slipstreamed past me right at the end. I'm still very happy with fourth. It's the best finish of my career but would have loved to have been on the podium.”

Teammate Ramirez scored his first championship points with a seventh place finish, having also been involved in the fight for the final podium position.