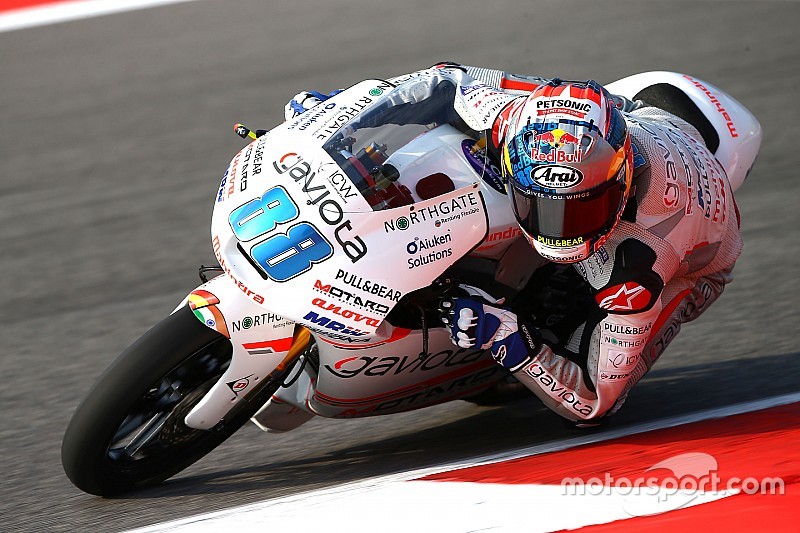 Jorge Martin will sit out of the Misano Moto3 race after suffering a fracture during qualifying, on Saturday.

Martin fell off the bike at Turn 6 on his final flying lap, fracturing the tip of fifth metatarsal on his right foot. The Spaniard was taken to the medical center immediately, where he was declared fit to race.

However, following further consideration, Martin has decided not to take any further part in the weekend as a precautionary measure.

The Aspar Mahindra rider looked set to grab a top-10 grid spot until his crash, which demoted him down to 12th position.

"I hope to run in Aragon,'' he said. "It's a shame because today we were doing better than yesterday, we tried many different things and I felt very comfortable with the bike."

Martin has seen an upturn in performance since Mahindra employed a new gearbox in the MGP30. The 18-year-old finished sixth in Austria before scoring his maiden podium a week later in the Czech Republic.

Bagnaia believed his rivals pushed the boundaries of the regulations to get a tow - following another rider closely to gain an aerodynamic advantage - ruining his chances of qualifying higher up the grid.

The Italian, who took pole last weekend at Silverstone, couldn’t even improve on his time from practice, leaving him frustrated after qualifying.

"It's a shame because many riders have been very clever and maybe we weren’t so much,’’ he rued.

“I hope that the race direction is going to do something because we have seen at the end of Qualifying an absurd situation, all riders looking for a wheel.

Bagnaia, however, has his head high - and is hoping to stay in the leading pack to notch a decent result at Mahindra’s 100 Moto3 outing.

“I hope the pace of the race is not very high, to give us time to catch up, and that the race is in group,’’ he said.

Among the rest, wildcard entrant Stefano Manzi qualified 20th and would be looking to repeat his heroics from Silverstone.

Team Italia riders Stefano Valtulini and Lorenzo Petrarca originally qualified in 31th and 32nd places respectively, but will move up one position on the grid following a penalty for CIP's Tatsuki Suzuki, who was demoted to 33rd.

Darryn Binder will start 32nd, with Alex Fabrri and Fabio Spiranelli lining up in 34th and 35th places respectively.