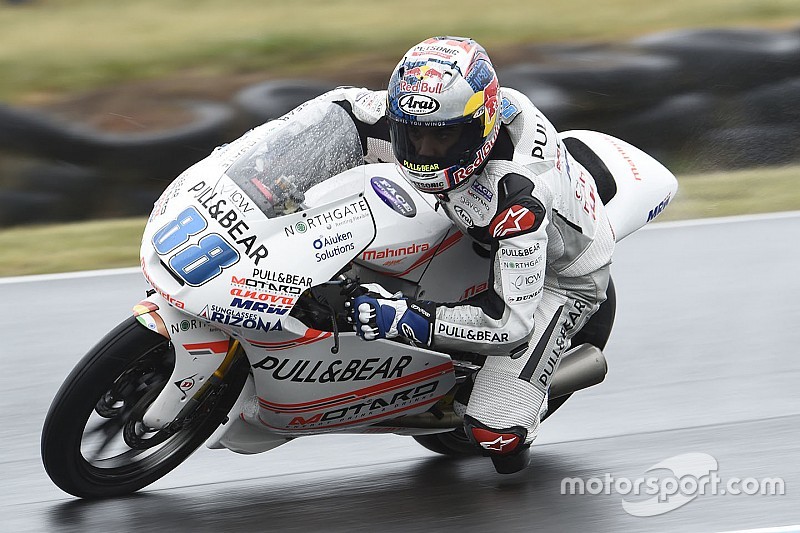 The Spanish rider ended ninth, just behind Platinum Bay's Darryn Binder in the other MGP3O after the session was red-flagged with four minutes remaining on the clock for riders to register their fast laps.

"It was crazy, there were very few minutes left and everyone wanted to go fast," said Martin. "It was hard because it was a very large group.

"It was [like] a fight, [and] seemed like the last lap of a race. I managed to overtake the riders well and to secure a third row start is very important for tomorrow [Sunday].

"I am faster in the dry than the wet, in those conditions I struggle a little more. Tomorrow I can be fighting for the front, I love this track and I think I can do a good race."

Teammate Francesco Bagnaia made it four Mahindra riders inside the top 10, ending 0.075s behind Martin in 10th.

"It was a good session, the pity is that the slipstream helps a lot on this track and we have not been quite smart enough when looking for it," the VR46 academy rider said.

"We could have waited a little and taken advantage of the group, but leaving with a tenth place start is not bad.

"Perhaps in the first part of the session I was wrong to lap a lot with wet tyres when it might have been better to go with the slicks. Anyway, I hope we can have a good race tomorrow. "

Ahead of the two factory Aspar riders, McPhee in the Peugeot branded Mahindra completed a brilliant run in fifth, 0.965s off polesitter Brad Binder.

Also impressing in the session was Brad's brother Darryn, registering his best Saturday result finishing eighth, inside the top 10.

It was then a huge gap to the next rider with CIP's Tatsuki Suzuki only 26th, ahead of Peugeot's Albert Arenas - the Spaniard survived a crash in the session.

UPDATE: Following investigation into an incident between Nicolo Bulega and Bagnaia, the race direction has imposed a three-place penalty to Bagnaia for causing a collision, which led to Bulega's crash.

Thus, the Italian will now start the Sunday's race from 13th.