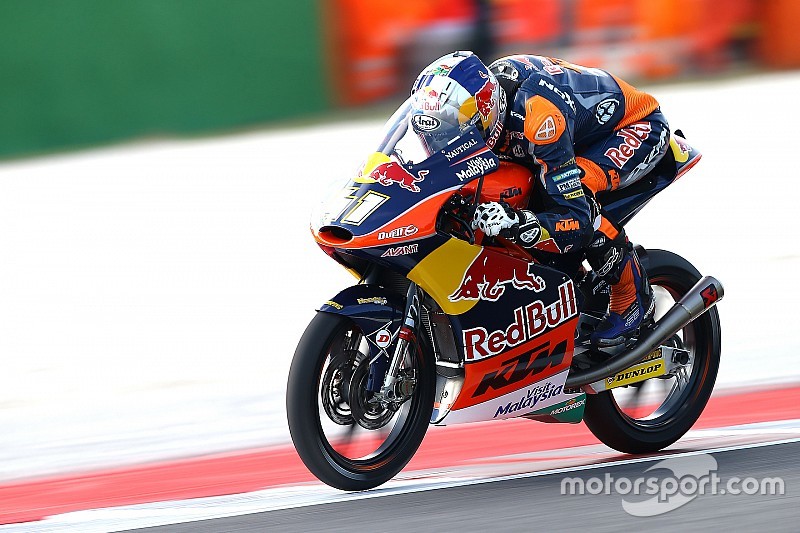 After leading most of the race, Binder looked to be settling for second when Bastianini pulled past and started to clear out with five laps to go.

However, the South African regrouped and managed a crucial last-lap overtake for his fifth win of the season.

Of those starting on front row, Bastianini got by far the better launch, with Niccolo Bulega slumping back into the pack and Binder getting passed by Jakub Kornfeil - only to retake the spot a few corners later.

Bastianini and Binder would then trade the lead every lap for the opening stint of the race, taking turns to storm into the lead with the slipstream into Curvone.

As they battled, a fair few riders managed to keep up, Bulega scything his way through to third behind the leading duo.

The Italian picked off Binder and Bastianini in quick succession on lap six, but would drop back to third in the latter part of the lap, Binder returning to the front instead.

From that point on, the race finally had an established leader in Binder, as Bastianini stuck right behind the South African but would not go for a pass.

Those chasing the pair started to drop off, Binder and Bastianini given further breathing room when Jorge Navarro - having cleared Bulega for P3 - then crashed out in a Turn 14 highside.

With five laps remaining, Bastianini was now out front, storming past Binder on exit of Curvone.

The Italian looked to have the race in control, leading Binder by three tenths entering the final lap, only for the South African to maximise the slipstream through Turn 11, edging back into first place.

Bastianini tried a desperate late lunge into the final corner, but had to do with runner-up.

He made up half the gap when he was forced to give the third place up to Bulega with two laps to go for exceeding track limits at the final corner.

However, Mir retook the spot a few corners later, with Bulega having to settle for fourth.

It was fifth for Kornfeil, holding off Andrea Locatelli, with Aron Canet, Philipp Ottl, Hiroki Ono and Fabio Di Giannantonio making up the top 10.

Navarro's crash means that Bastianini is now Binder's closest rival in the standings, trailing the South African by 106 points.

If Binder manages to keep the gap over 100 points next time out at Aragon, he will be crowned Moto3 champion.