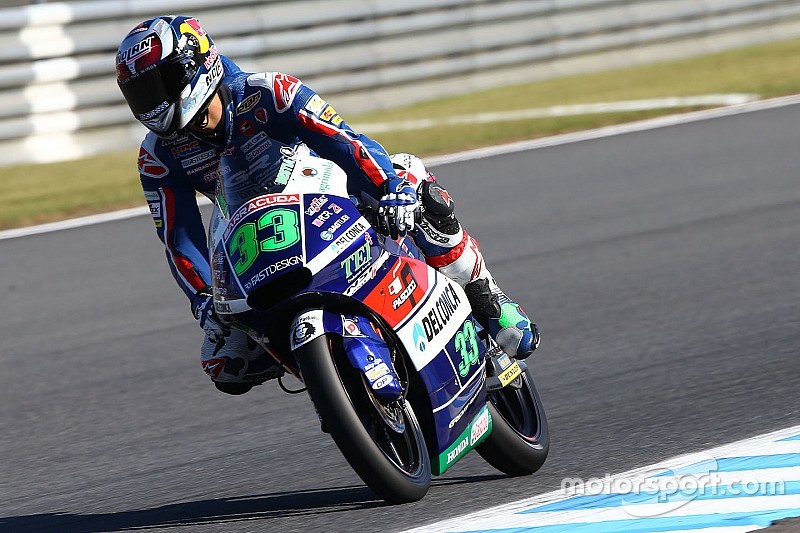 The South African, who clinched the title last time out at Aragon, then remained fairly unchallenged throughout the next 17 laps, until Bastianini closed up.

With two laps remaining, the Gresini rider was all over Binder, and finally on the last lap, with a few corners remaining, the Italian dived to the inside of his rival to take the lead.

Binder fought back, but Bastianini had just enough in hand to take his first win of the season by a mere 0.017s over the line, as Binder registered his 12th podium of the season in second.

Behind the top two, the battle for third was on with Migno tussling with local hero Hiroki Ono and Nicolo Bulega.

The Japanese rider, who lost his pole position to Migno due to a penalty, was leading the two Sky VR46 riders on the final lap.

Just as Migno tried to make a move on Ono, the pair made slight contact, enough to send the Italian into a highside crash. He remounted, but finished well out of the points in 25th.

After fighting with the lead group, Aspar Mahindra's Francesco Bagnaia fell into the clutches of the second group, which was led by Philipp Ottl.

Meanwhile, erstwhile title contender Jorge Navarro dislocated his shoulder after a crash on Lap 1 going into the first corner, which also took out John McPhee and Gabriel Rodrigo.

The Estrella Galicia rider had made slight contact with Mir into the corner and lost control of his bike, right into the path of McPhee and Rodrigo.

UPDATE: Ono has been disqualified from the race for his bike being 'under the minimum weight'. This gives Bulega the final podium place.