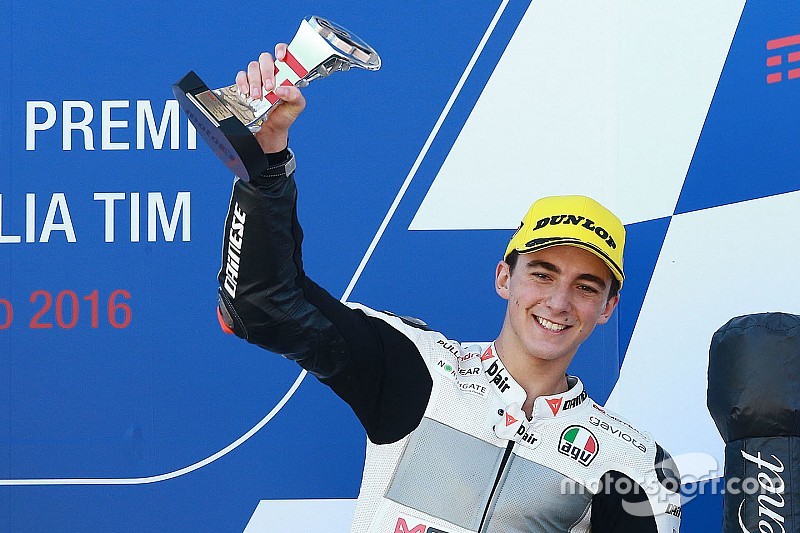 Francesco Bagnaia terms Mugello Moto3 race weekend as his best of his career till now having notched up his and the Indian manufacturer's third podium of the season.

On the last lap, Bagnaia was among the four riders chasing Binder for the win, but in a fierce competition, the South African took victory while di Giannatonio edged past Bagnaia by 0.031s.

Bagnaia himself had a photo finish with Niccolo Antonelli on his tail, finishing 0.006s behind as the top five were covered by a mere 0.077s.

"A great weekend for me and the team – I think my best in the World Championship so far," said an elated Bagnaia.

"We’ve been consistently in the top five, and finishing third at Mugello is amazing. It’s a great result.

"I pushed to the limit in the last lap to try to close the gap to Brad, and maybe if Quartararo had been further away from me I could have fought for the win," he explained.

"But third is a good result. It was an amazingly close race, and you could go from first to eighth in one lap – which is not easy.

"It’s difficult to stay calm with bikes all around you. I tried to stay at the head of the group on every lap, but I went wide at the first corner with a few laps to go but I manage to claw back to the podium," he added.

The Italian teen was fast all through the weekend finishing third, second and fifth in the three practice sessions.

The only blip was the track limit infringement in qualifying which demoted him from second to eighth for the start of the race.

Teammate Jorge Martin having started 14th was up to fourth at one stage but issues while changing gears limited his performance in the second half, as he finished 14th.

"I started calmly, sitting in eighteenth at first, but from there I slowly I managed to climb to fourth," he said.

"The only downer is that we had a couple of hiccups with the gear changes on the key laps."

Behind the two factory riders, CIP's Tatsuki Suzuki was 19th, whose two race points scoring run came to an end in Italy.