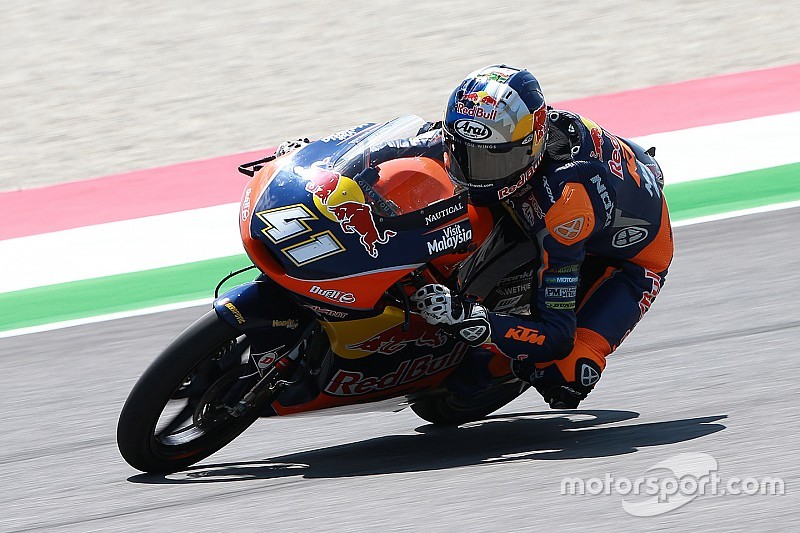 Brad Binder came out on top in a nailbiting slipstreaming epic at Mugello to extend his Moto3 points advantage as his main title rivals failed to score.

The 20-lap race saw the top-five finishers covered by less than a tenth of a second, as Binder prevailed over Fabio di Giannantonio by a mere 0.038s.

Having seized the advantage on the run down to the first corner at the start of the final lap, the South African just gave himself the margin he needed to protect his lead as Francesco Bagnaia and Fabio Quartararo battled over second place.

"Today's race was crazy - I was in first, 10th, eighth; it was so difficult to plan," said Binder. "But I tried to keep back in the group so I could arrive on the final lap at least in the top three."

Both Bagnaia and Quartararo found themselves outdragged on the run to the finish by 17-year-old rookie di Giannantonio, who had scored no points prior to Mugello.

Completing in the top 10 were Hiroki Ono, Joan Mir, Niccolo Bulega, Juanfran Guevara and Andrea Migno, who had started second but couldn't sustain his early speed.

It was a disastrous race for Binder's chief championship adversaries, as Romano Fenati and Jorge Navarro both failed to make the finish.

Poleman Fenati fell out of contention when his Sky Racing KTM suffered a mechanical problem at the halfway stage, the Italian having been in the thick of the lead fight up to that point.

A short time after, Navarro found himself in the gravel at the last corner after making contact with Guevara, while his Estrella Galicia Honda teammate Aron Canet also fell at the final turn on the last lap.

Earlier on the final tour, Argentina winner Khairul Idham Pawi crashed out of the leading group, having led a race for the first time since his Termas de Rio Hondo triumph early on.

Binder now leads the championship by 49 points from Navarro, with Fenati a further 11 back in third.

Bagnaia certain of pace to fight for Mugello win