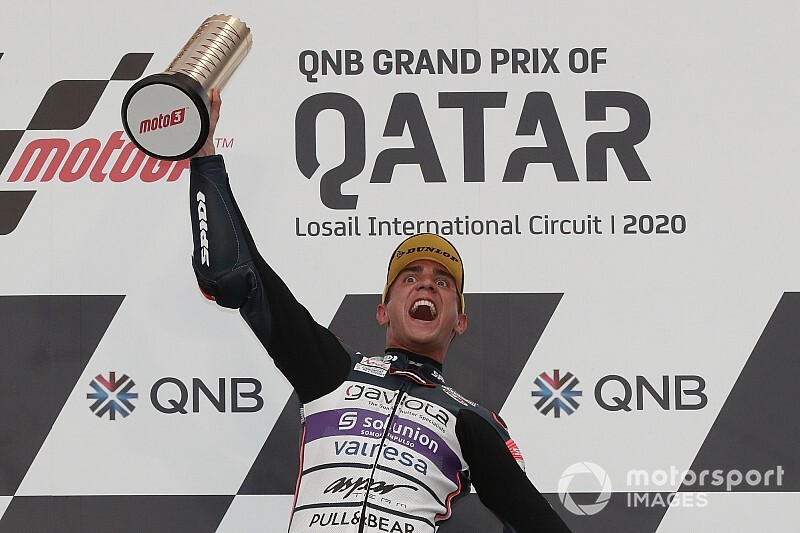 Albert Arenas clinched the first Moto3 win of the new decade and KTM’s 100th after beating John McPhee by 0.053 seconds in a thrilling Qatar Grand Prix.

Arenas spent several stints at the head of the field, and made a break with McPhee in tow on the final lap, repelling the Petronas Sprinta rider’s advances to secure his fourth grand prix victory.

Poleman Tatsuki Suzuki led off the line on the SIC58 Squadra Corse machine, though would lose out to Ajo KTM’s Raul Fernandez on the drag along the 1km main straight into Turn 1 on the second tour.

After Tony Arbolino got the Snipers Honda into the lead at Turn 6 on lap two, Arenas capitalized on a mistake for the Italian to put the Aspar Team KTM at the head of the pack at the end of the third tour.

Arenas was able to get his bike out of the last corner better than the rest and hold the lead despite the pack swarming behind him in the slipstream for a handful of laps.

As the lead group grew to 19 by lap nine, Fernandez finally deposed Arenas, before Leopard’s Jaume Masia used the power of his Honda to blast past into Turn 1 on the following circulation.

Arenas worked his way back into the lead when he scythed through on Darryn Binder (CIP KTM) at Turn 2, and remained in first place for three laps.

Arbolino, Suzuki and McPhee then all took turns at the head of the pack as the laps counted down, before Gabriel Rodrigo moved his Gresini Honda to the front at the start of the penultimate tour.

As the last lap started, Arbolino made slight contact with Binder as he drifted over to the outside of the track under braking for Turn 1 and sent the CIP rider down in a frightening accident.

Through the chaos, Arenas found himself back in the lead having been forced wide at Turn 1 and down a handful of spots a few laps previous.

McPhee went with him as Arenas tried to break away on the last lap, but could do nothing on the run to the chequered flag to deny the Aspar rider.

Masia did cross the line in third on his debut ride for Leopard, but was hit with a post-race penalty for exceeding track limits and was demoted to fourth.

This promoted an initially dejected Ai Ogura on the Honda Team Asia bike to the final podium place, with Suzuki completing the top five behind Masia.

Rodrigo was also hit with a one-place drop and was sixth in the end, with Gresini teammate Jeremy Alcoba seventh and lucky to avoid a penalty after taking Sky VR46’s Celestino Vietti out at Turn 6 late on.

Filip Salac (Snipers Team) recovered from 20th on the grid to finish eighth, with Dennis Foggia (Leopard) coming from 19th to finish ninth and Fernandez rounding out the top 10.