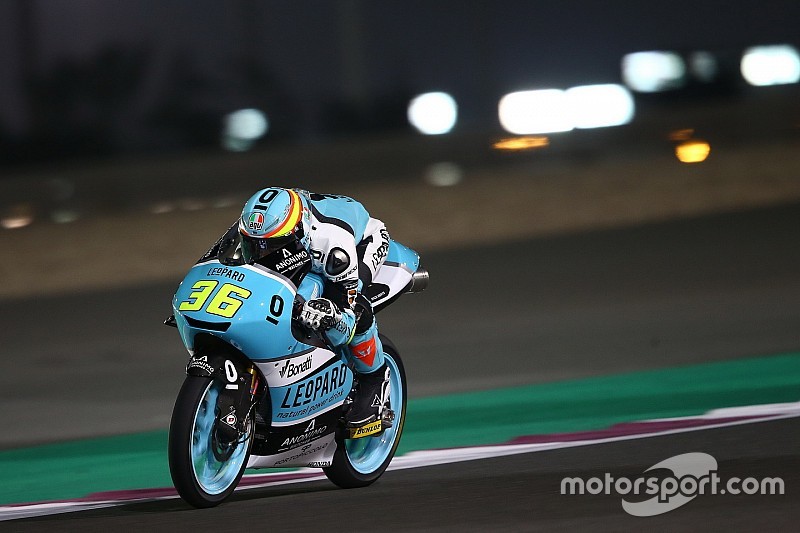 Top 2016 Moto3 rookie Joan Mir kicked off his sophomore campaign in the lightweight class by winning the season-opening race in Qatar ahead of John McPhee.

Similarly to MotoGP, the starting order of Moto3 was determined by the combined times of the practice session of Thursday and Friday, as the entire Saturday programme was cancelled due to torrential rain.

Gresini's Jorge Martin started from pole as a result, sharing the front row with Phillip Oettl and Romano Fenati.

Martin kept the lead off the line, and spent the early laps at the sharp end of the leading group, which remained crowded throughout the entire race.

Each lap, first place was traded on the main straight, with Mir, Andrea Migno, McPhee, Juanfran Guevara, Fabio di Giannantonio and Fenati all leading for at least one lap.

Leopard's Mir was the first rider able to stay at the top for any meaningful duration, as he led from Lap 13 to 16 before McPhee slipstreamed past to start the final lap in the lead.

However, Mir quickly fought back to lead again after Turn 4, and the Spaniard built just enough of a cushion up front to deny McPhee any chance of a counterattack.

"Amazing race, amazing to win like this. I want to thank my team for my fast bike, it was strong enough to win today. Finally my second victory of my life is amazing," Mir commented after the race.

McPhee scored his first Moto3 podium in a dry race in second, and secured the first top-three finish of the newly-formed British Talent Team.

Martin kicked off his third Moto3 campaign with his second-ever podium, as Estrella Galicia 0,0 rider Aron Canet made it three Spanish riders in the top four.