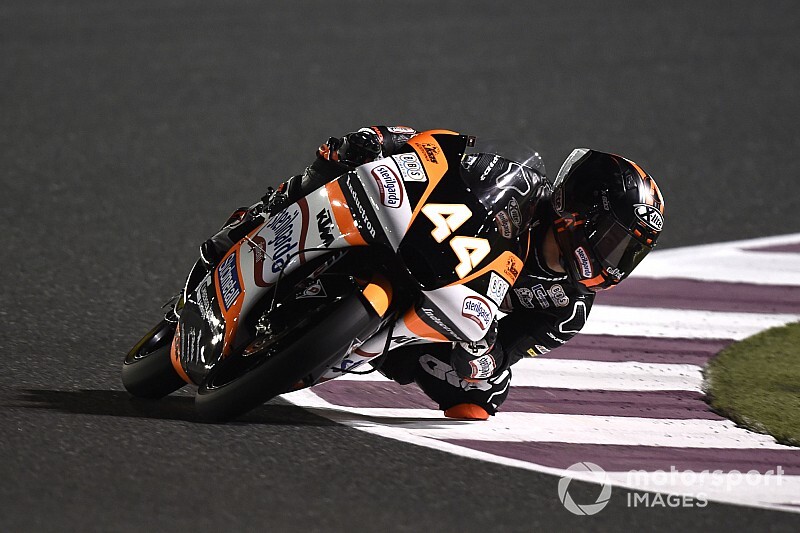 Aron Canet scored the first Moto3 pole position of the new season in Qatar for the newly-formed Max Racing Team.

Both Moto3 and Moto2 have switched to a MotoGP-style two-part qualifying format for the 2019 season, with the top 14 from practice securing automatic Q2 berths.

The remaining 15 riders were left to fight it out in Q1 for four slots to join the pole shootout.

First to dip underneath Vietti's benchmark in Q2 was Romano Fenati (Snipers Team) with a 2m06.681s, followed by teammate Tony Arbolino and Kaito Toba (Team Asia).

Toba's benchmark stood for around a minute before it was bettered by Canet, who put himself a quarter of a second clear with a 2m05.883s with four minutes left on the clock.

At the chequered flag, Dalla Porta grabbed second ahead of Toba, while Andrea Migno (Bester Capital Dubai) moved up to fourth ahead of McPhee and Niccolo Antonelli (SIC58).

Fenati - back in Moto3 this year with his old Snipers outfit after losing his Moto2 ride last year - did not leave the pits in time to begin what should have been his final flying lap.

The Italian will start Sunday's season opener from 12th, one place ahead of Gresini's new rider Gabriel Rodrigo, who has recovered from breaking his right collarbone in testing.

Last year's Valencia Moto3 winner Can Oncu (Ajo) will start his first race as a full-time rider in 18th after ending up slowest of all in Q2.