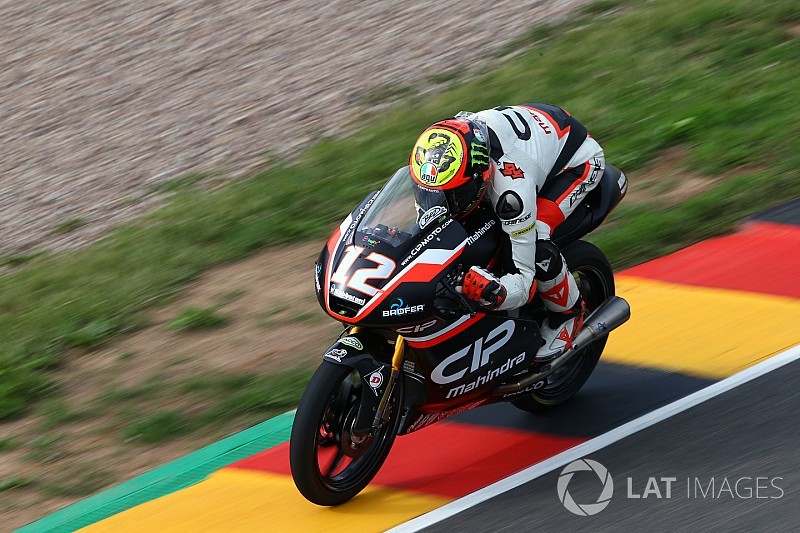 Mahindra Racing bagged a point in the German round of Moto3 at Sachsenring following a last-ditch effort by Marco Bezzecchi on the final lap of the race.

CIP’s Bezzecchi, unarguably the best rookie on Mahindra’s rider roster, dropped from 18th to 21st by lap 3, but started recovering positions in the final seven laps of the race.

On the final tour, the Italian reeled in VR46 rider Andrea Migno and Peugeot's Jakub Kornfeil to elevate himself to the final points-paying position in 15th.

It was his third points finish in last five race and makes him the second highest-scoring Mahindra rider in the championship.

Speaking after the chequered flag was drawn, Bezzecchi felt the positions lost early on made Sachsenring’s 27-lapper a “difficult race” for him.

“It was a very difficult race because at the start [Livio] Loi made a mistake in the first corner, I got pushed wide as a result and I lost some positions,” he said.

“I had to push a lot to overtake other riders. I got behind Migno for quite a lot of the race and that helped me to stay in the group more.

“On the last lap I just pushed 100% and I overtook Migno and Kornfeil and got another point. I’m happy with what we have done this weekend, it was tough.”

“Marco once again showed he is capable of a strong race pace and to finish consistently in the points,” he said. “

“We are losing out in the first few laps, and not only because of poor qualifying positions.

“This leaves him with too much to do in the race. Now we have a few weeks off, and we will be working on our strategy to address this issue.”

Dalla Porta reported that tyre went away after one-third distance, but has vowed to fight back after the summer break in August.

"It was a difficult race, I did well but I made a mistake in the last corner of the first lap in which I lost more than I gained,” said the Italian.

“After about eight or nine laps, the performance of the tyres dropped, and although it remained constant, the fast group had gone.

“We leave Germany with a little more experience and miles under our belt to take into the summer break. We will come back stronger. "

CIP’s Manuel Pagliani finished right on the tail of Dalla Porta in 20th position, while Albert Arenas’ replacement Raul Fernandes was further up the road in 22nd. Peugeot’s other rider Patrik Pulkkinen was classified 25th.