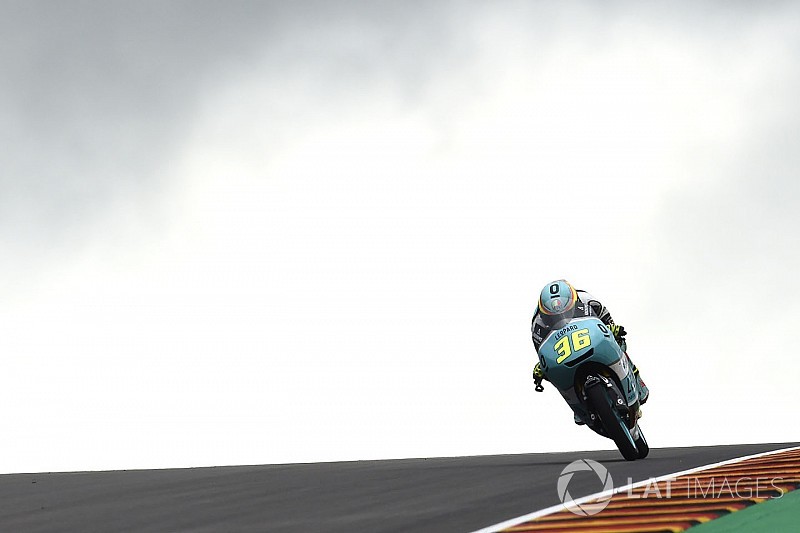 Joan Mir extended his championship lead by winning the Moto3 race at the Sachsenring, out-duelling Romano Fenati and Marcos Ramirez on the final lap.

The first eight laps saw Mir, Fenati and Ramirez constantly rotate the top three positions among themselves before the championship leader managed to keep the lead for several laps.

Fenati soon restarted the battle and took the lead, but Mir managed to fight back every time the Italian found a way past.

Still, the Italian started the final lap in the lead and, even though he kept his advantage at the first turn and even pulled a small gap out over Mir and Ramirez.

But Leopard Racing rider Mir made his move at the penultimate corner to seal his fifth win in nine races, beating Fenati to the line by 0.121s.

Sky Racing VR46's Bulega took fourth, as he and Arbolino lost ground towards the end of the race. The latter failed to finish the race after a highside crash at Turn 9.

Pole-sitter Aron Canet (Estrella Galicia) was unable to keep up with the leaders and soon dropped outside of the top 10 before crashing at Turn 11.

British duo John McPhee and Danny Kent, standing in for injured KTM rider Niccolo Antonelli, both crashed out, as did Gabriel Rodrigo.