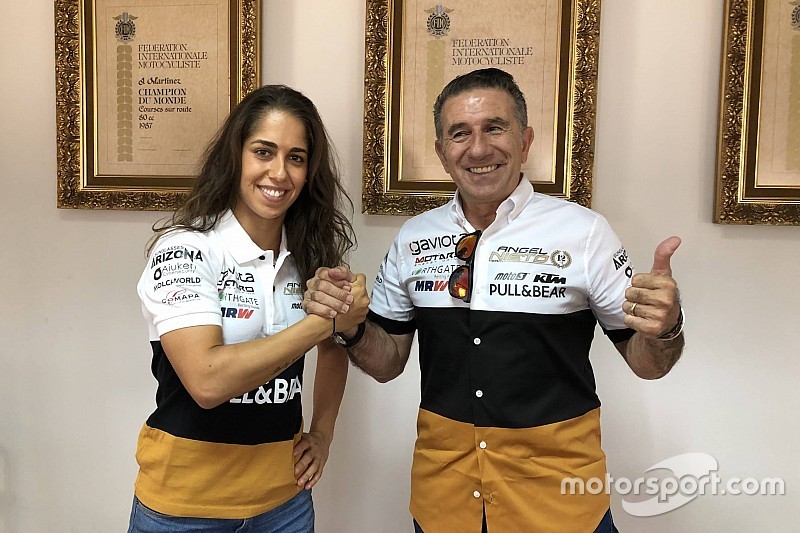 Maria Herrera will return to the grand prix motorcycle racing paddock next year after signing a deal to race in MotoE with the Angel Nieto team.

Herrera was a regular of Moto3 from 2015 until the end of last year, when her AGR team folded mid-season, and she did not manage to secure a ride for the current campaign.

Instead she turned her attentions to the fledgling World Supersport 300 series, placing 13th in the points this season.

Next year she will tackle the five-round MotoE series with the Nieto squad, partnering former 125cc champion and Moto2 race winner Nico Terol in the Spanish squad's two-bike set-up.

“I am really happy to have signed with the Angel Nieto Team for the FIM MotoE World Cup, I think we will make a good team," said Herrera.

"I am already looking forward to getting to work in November at the first test, which will be my first time on the bike.

"I am very happy because this season I have already ridden a 600 at a good level, even though I know the move to MotoE will be a new challenge, and I will keep training for it in the same way.

"I have been told a few things about the bike, which I think will be very different to anything I have ridden before, but it will just be a case of adjusting.

"I am excited to return to the World Championship paddock and for as many people as possible to see me ride, because this season I have already shown that I can compete with the best.”

Team boss Jorge 'Aspar' Martinez added: “I am delighted to be able to welcome Maria Herrera to the team. She is a fast rider and we are very happy to be able to bring her in to this new structure.

"We have the challenge ahead of us of winning another world title and with Maria and Nico Terol we can put together a winning project in this new series.”

Other riders to have signed up for the inaugural MotoE season so far include current Avintia MotoGP racer Xavier Simeon and former Moto2 riders Jesko Raffin and Eric Granado, while Bradley Smith and Randy de Puniet are also expected to take part.