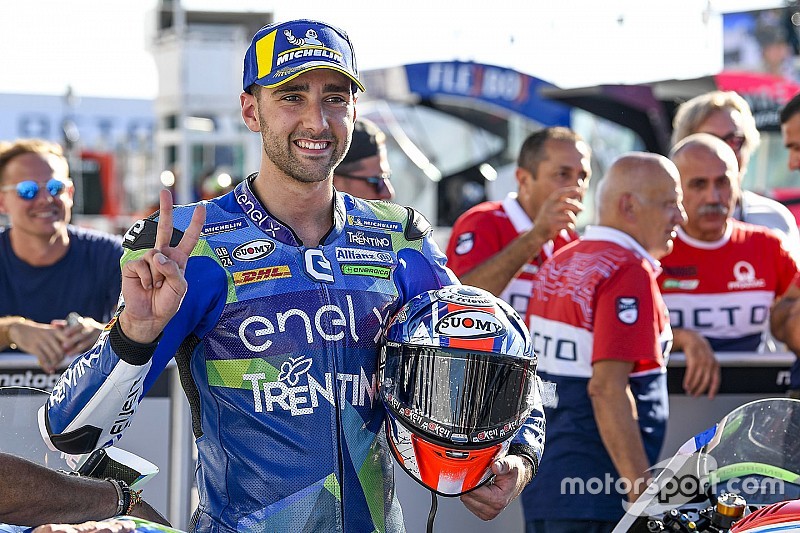 Matteo Ferrari vaulted into the lead of the MotoE standings with his first victory in the electric MotoGP support category, as several big names crashed out of contention.

Gresini rider Ferrari, a regular in Moto3 in 2013-15, passed ex-MotoGP rider Xavier Simeon on the fourth lap of seven and resisted a late charge from Hector Garzo to win.

With pre-race points leader and Austria winner Mike di Meglio suffering a bike failure and second-placed Bradley Smith being involved in a multi-bike pile-up, it means Ferrari now holds a two-point lead in the standings over Avintia man Simeon.

Local hero Alex de Angelis (Pramac) led the way from pole ahead of Ferrari and Simeon, but the Sanmarinese rider had already dropped to third when he suffered a major high-side exiting Turn 6 on the fourth lap.

That left Simeon holding a slender advantage over Ferrari, but the latter passed for a lead he wouldn't relinquish at the Quercia left-hander on the same tour.

Simeon then had to turn his attentions to fending off Tech 3 rider Garzo, who had made his way up from eighth on the grid to run third heading into the final laps.

Garzo managed to pass Simeon for second on the final lap, but ran out of time to challenge Ferrari, who crossed the line with 0.187s in hand.

Behind the lead trio, who finished just half a second apart at the finish, ex-Moto2 racer Jesko Raffin picked up fourth for Intact GP ahead of Niccolo Canepa (LCR) and Maria Herrera (Angel Nieto), who scored her first MotoE points in sixth.

Smith ended up 12th on his ONE Energy machine after getting caught up in a three-way melee on the second lap at Quercia with Matteo Casadei (SIC58) and Niki Tuuli (Ajo).

Sachsenring race winner Tuuli was seen being stretchered away from the scene of the crash, while Casadei was likewise unable to continue.

Tuuli's Ajo team later clarified the Finn sustained fractures to his left wrist and left femur, and he will therefore sit out Sunday's second race.

Honda: MotoE of interest if we can do it "properly"