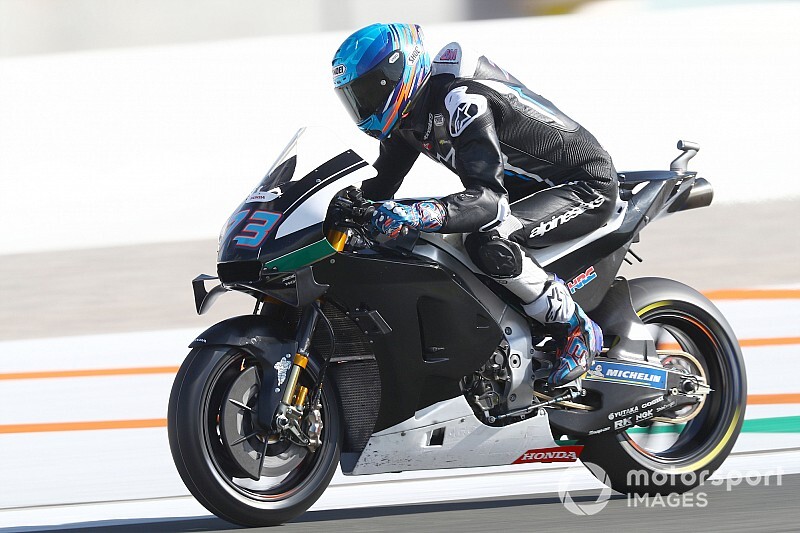 Honda's new MotoGP signing Alex Marquez says he was more comfortable with the RC213V bike than he expected to be in Valencia testing.

Marquez, drafted in to partner his brother Marc at Repsol Honda in place of the retiring Jorge Lorenzo, recovered from an early shunt in the two-day Valencia test to end up 22nd-fastest, two seconds down on pace-setter Maverick Vinales.

Honda's bike has a reputation for being particularly physical and unwieldy compared to its rivals' machines, but Marquez said he quickly felt at ease with the RC213V, albeit with the caveat that he wasn't anywhere near the limit.

Asked how his adaptation was going, he said: "Better than I expect, especially in the position side - Honda's a small bike but I feel comfortable on the bike already now. Still some improvement to do to be a little bit more comfortable, but really good, about position.

"Difficult or easy bike? I need to be more close, I need to find more the limits to say if it's an easy or difficult bike.

"At the moment I feel everything comfortable, everything good, so I need to keep going like this, keep improving, find the limits to know what I need to improve more."

"He was not super-fast, but at least he was making constant progress to understand the bike," Puig added, speaking to motogp.com.

"I think he didn't want to push maybe too much, to avoid a crash. The guy is listening, the guy has a lot of interest to learn - it's what we expected."

Marquez said he was trying to learn from all the riders he ran with on track during the two-day test.

These riders included his six-time MotoGP champion brother, who followed his teammate for a stretch during the second day.

"He's riding not so bad," Marc said of Alex, speaking to MotoGP.com. "At the moment [he's] struggling where is the most difficult point with Honda bike, that is the last part on the brakes.