Social media over the last couple of weeks has been awash with opinions about Race Direction's handling of numerous issues in MotoGP.

The biggest talking point coming into this weekend's German Grand Prix was how Race Direction dealt with Fabio Quartararo's suit drama, when the Yamaha rider's leathers split open late on in the Catalan Grand Prix and ultimately netted him a three-second penalty post-race.

Quartararo was contravening the regulations, but the punishment for such a transgression was ill-defined. As a matter of rider safety, many – including Quartararo – feel he should have immediately been shown the black flag and disqualified. Others have been critical of the three-second penalty - for the fact a penalty for something that ultimately wasn't his fault didn't seem appropriate, nor did it make sense to slap him with it hours after the chequered flag.

When asked by Motorsport.com on Thursday in Germany if he felt Quartararo should have been black flagged – having already been critical of him discarding his chest protector in Barcelona – world champion Joan Mir says he would have wanted a black flag if he was in that situation.

This discussion continued into Thursday's pre-event press conference in Germany, where KTM's Miguel Oliveira – who won in Barcelona – said the decision to throw a black flag wasn't as clear cut as has been made out. 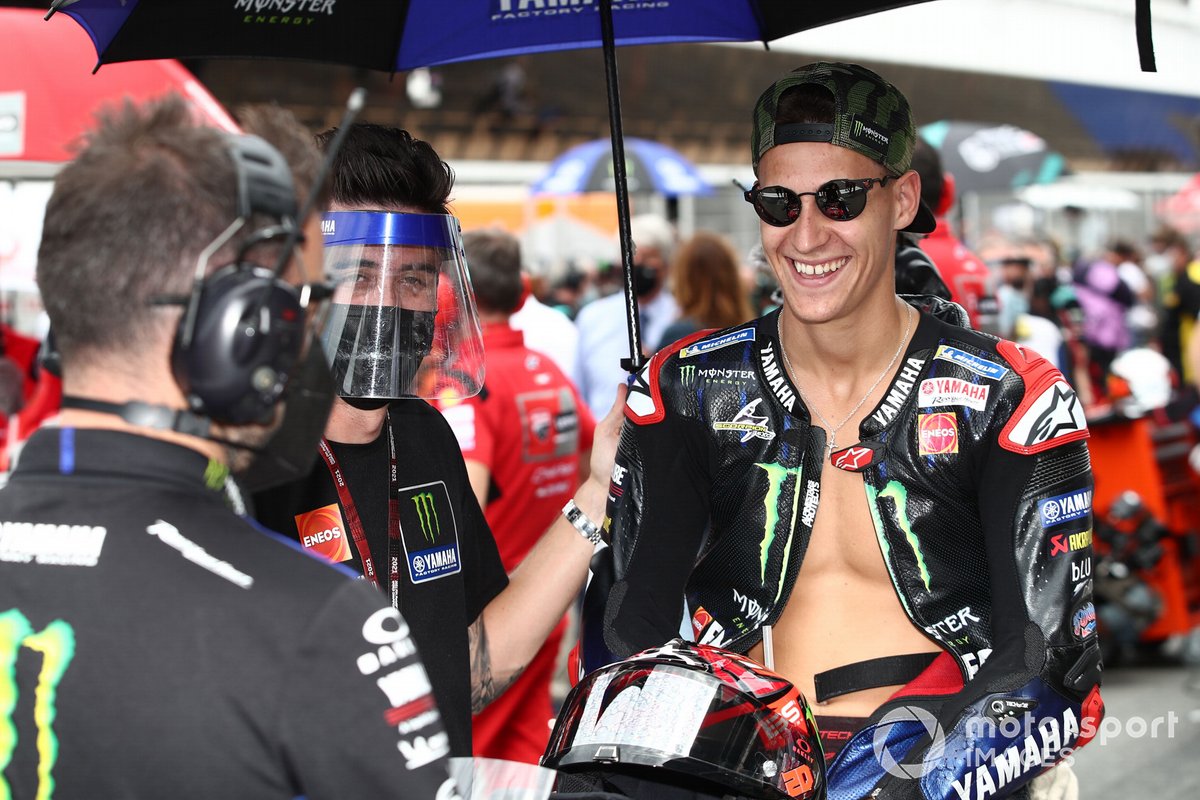 "I mean, when things happen in the heat of the moment, I believe even for Race Direction it was a hard call because you don't actually know what happened, if he opened the leathers or if the leather opened by itself," he said.

"So, in that moment, to black flag a rider for the material [malfunctioning] and not from a mistake of his, I think it's a bit debatable.

"But it's Race Direction, I'm not going to have an opinion on their decision. It is what it is."

The Barcelona incident has only served to put MotoGP Race Direction under further scrutiny, following a spate of questionable decisions over the past year.

Riders have aired their dismay at MotoGP's yellow flag rule introduced in 2020, whereby anyone passing through a yellow flag zone loses that lap time regardless of whether there is any hazard present. Track limits have come under fire, even more so recently after the introduction of pressure sensors on run-off areas to police track limits removing what Mir described as the "human touch" from these decisions. 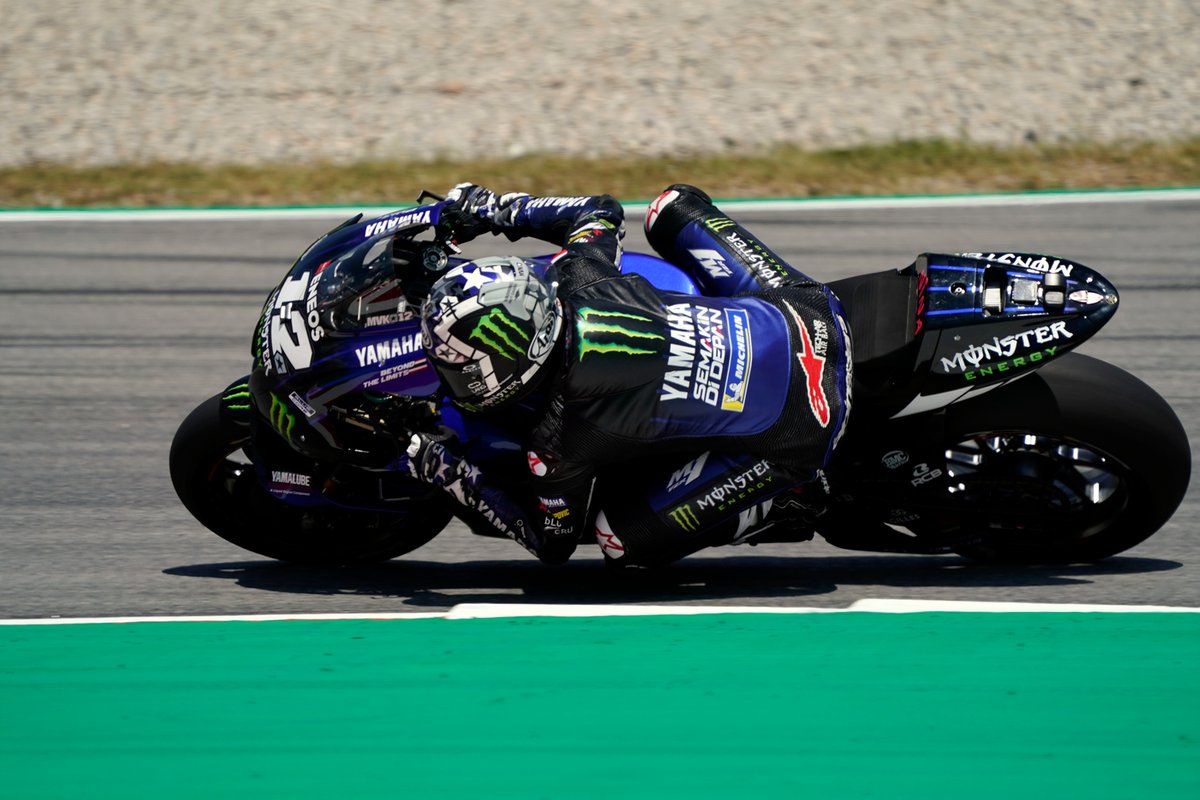 Maverick Vinales fell foul of this system twice in Portugal, losing qualifying laps for exceeding track limits – only for images to reveal later that it was a minute bit of rear tyre that triggered the sensor, making it hard to fathom just what he would have gained.

Yamaha teammate Quartararo believes the track limit rules are overkill now, the world championship leader saying the strictness of them is making racing "a little bit too serious".

He cited the penalties handed out to Mir and Oliveira at Mugello, when the pair touched the green painted area next to the kerbs on the final lap – a transgression in all classes that forces a rider to cede one position. As both riders did it at the same time, they kept their original positions of second and third. Race Direction deemed anyone running off track at Mugello's Turn 5, as both did, gained a rider 0.5s.

Quartararo also had an issue with the three-second penalty given to him in Barcelona for running through the chicane at Turns 1 and 2 when he made a mistake.

Race Direction stated any rider who did this had to lose a second in lap time or else face a long lap penalty. Quartararo dropped seven tenths on that lap, netting him the penalty – though he argued that it was impossible for him to truly judge how much time he could drop while on the bike. 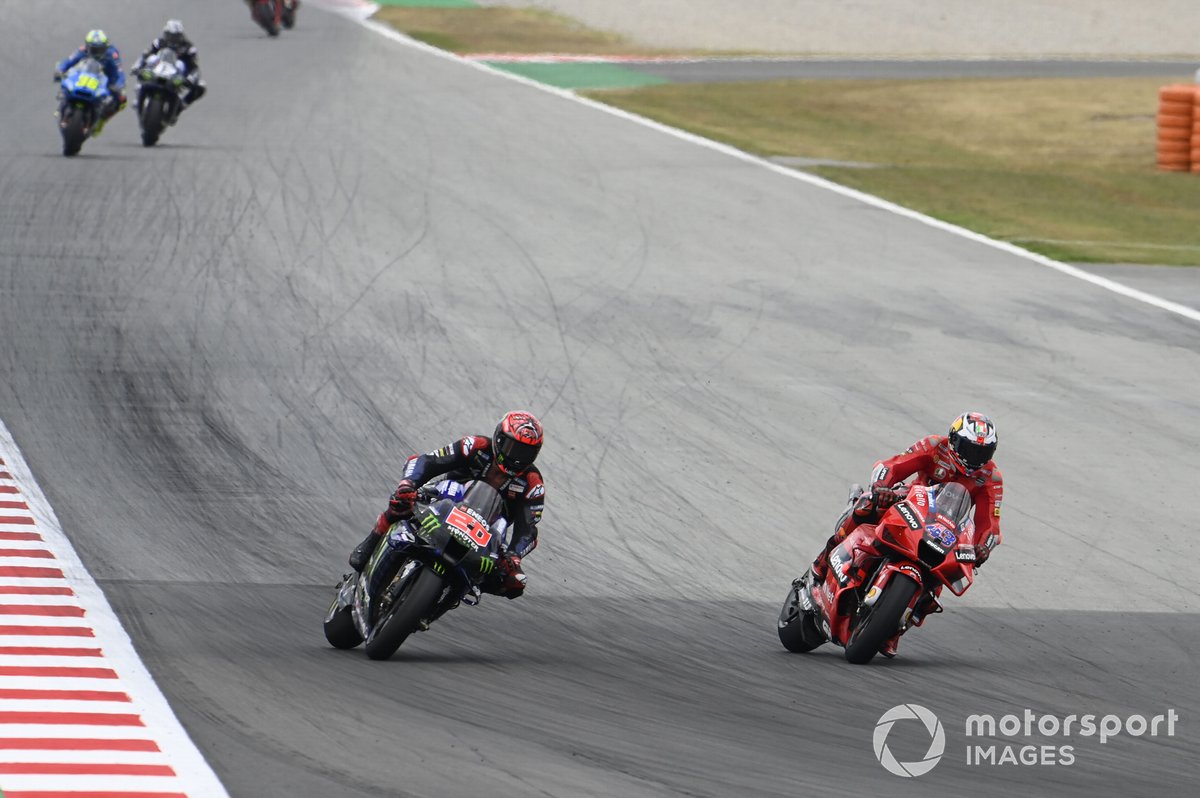 "Yes, not only talking about what happened in Barcelona but what happened in Mugello with Joan and Miguel, for me this kind of penalty is strange," Quartararo said when asked by Motorsport.com if confidence in Race Direction was at its lowest. "You go out two or three centimetres on the green and drop one position – you don't gain time [doing that]. For me it's a little bit too much, also what happened in Barcelona when I went straight [at Turn 1]. I was seven tenths slower and they say if you go [another] three tenths slower you have no penalty. I mean, how can you calculate?"

This response led to tensions between Quartararo and Jack Miller – who was trailing Quartararo when he made that error and gained third from it – flaring on Thursday, with Miller noting that the track limits rules are there for safety and have been advocated for in the Safety Commission (something that oddly isn't attended by all riders, Quartararo seemingly one of them).

Quartararo responded: "Yes, but the rule is stupid", while Miller replied: "Yes, but if it was grass or gravel in the middle of the chicane?"

"I go in the grass," Quartararo added.

"That's right, so you lose more than a second," Miller continued. "So, this green on the outside, if it was grass like before you don't go all the way to the kerb. So, this makes the wall get closer. 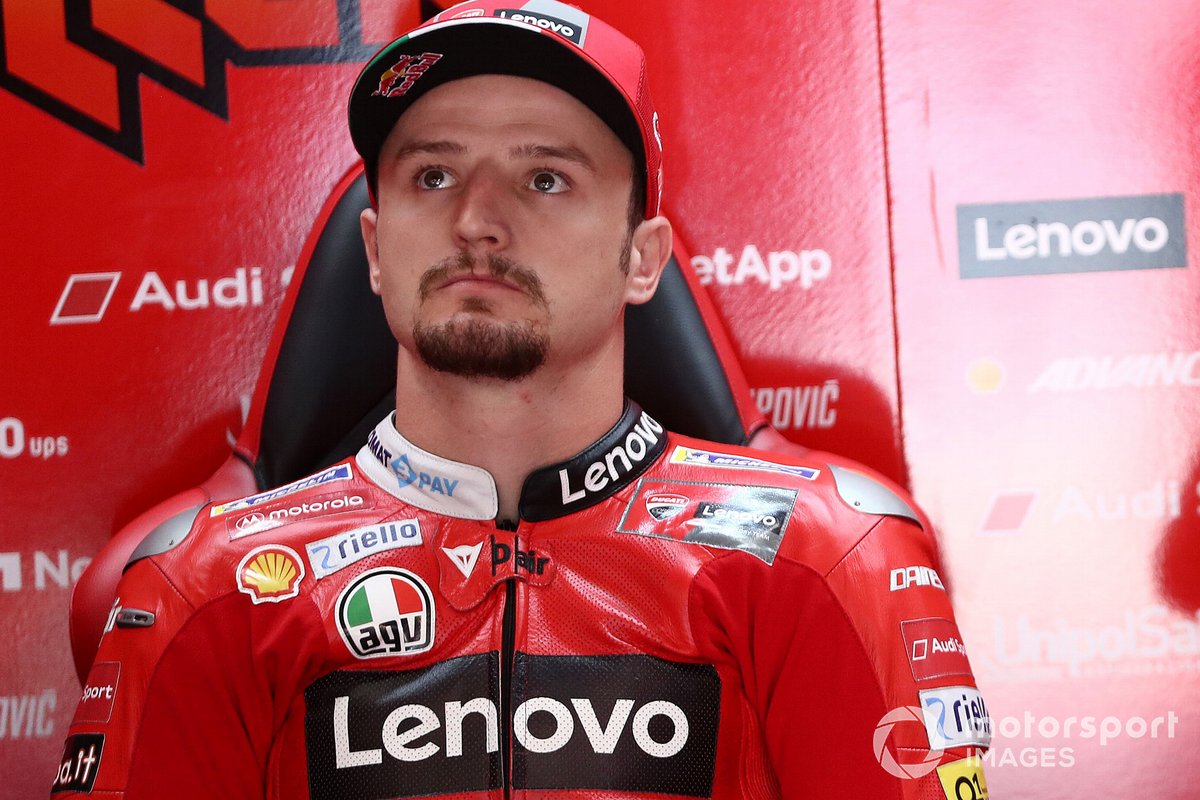 "The same with the chicane, before when it was gravel, nobody goes through. When asphalt came, people would go through three, four times in a race, don't use that side of the tyre for six times each side over the tyre and they gain an advantage at the end of the race.

"So, the rules are the rules. Nobody likes the referee, they can do a lot of things better like we all can do, but somebody needs to be the bad guy. It's as simple as that."

Pramac's Johann Zarco offered a balanced argument to the Race Direction issue, noting that the decision-making process for track limits is incredibly time-sensitive given MotoGP's 45-minute race time. However, he agrees that the current system is fallible. 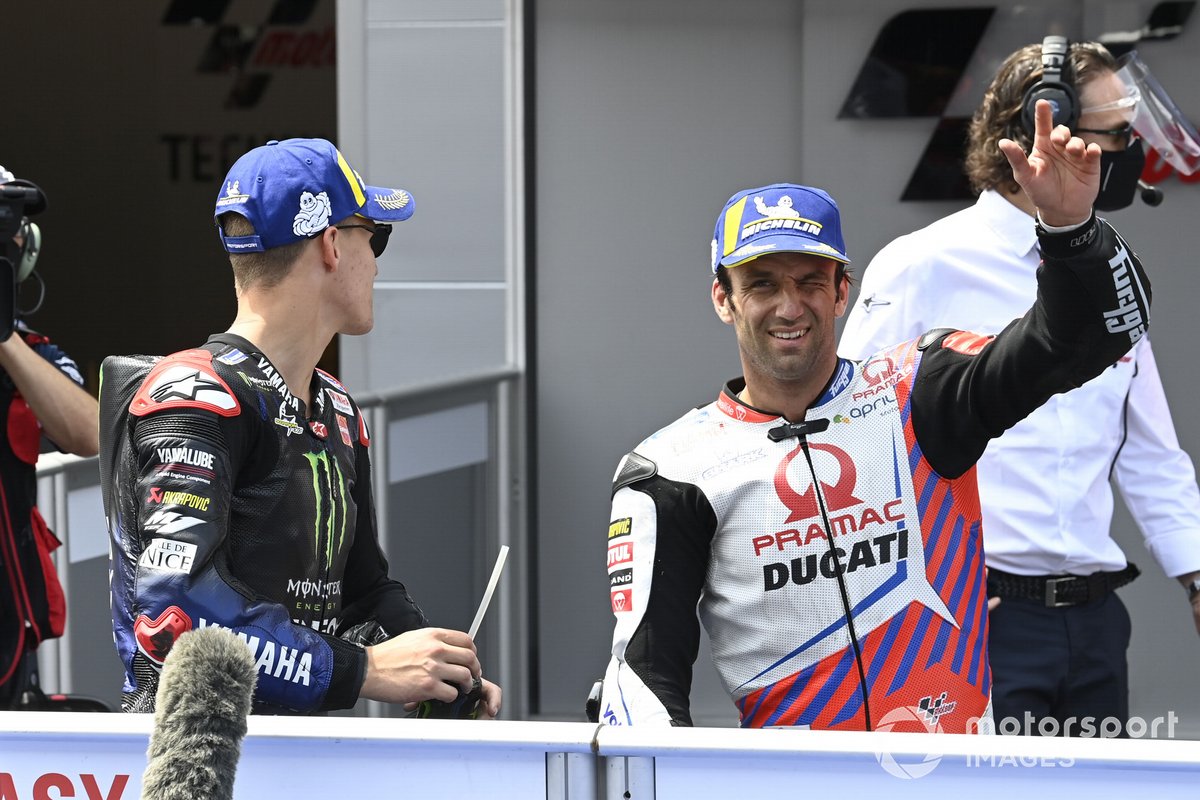 Miller's point about safety also highlights the eternal struggle: MotoGP has to craft regulations that match the advancements in safety. Track limits wasn't much of an issue in the past because kerbs were lined with AstroTurf and Tarmac run-off areas were all gravel.

But AstroTurf proved too dangerous because of the way it absorbed water, with the material removed from race tracks after Aragon 2014 when Valentino Rossi crashed and was briefly concussed when he ran onto the material. And run-off areas have had to grow to accommodate for the increase in speed.

All of this can be easily looked at as the normal process of riders and rulemakers predictably disagreeing, but the concerns raised are legitimate – not least when the lower categories are taken into account.

During the Barcelona Moto3 race, a number of riders in the large lead group deliberately backed off at critical points to stop being swamped in the slipstream on the main straight. Behaviour in Moto3 races has been a hot topic for some time, particularly in regards to qualifying tactics – though Race Direction has taken steps to stop this by introducing harsher penalties.

But the issue of how riders are going about final laps in big groups and the safety concerns there have been thrust into the spotlight by the tragic death of Jason Dupasquier at Mugello. 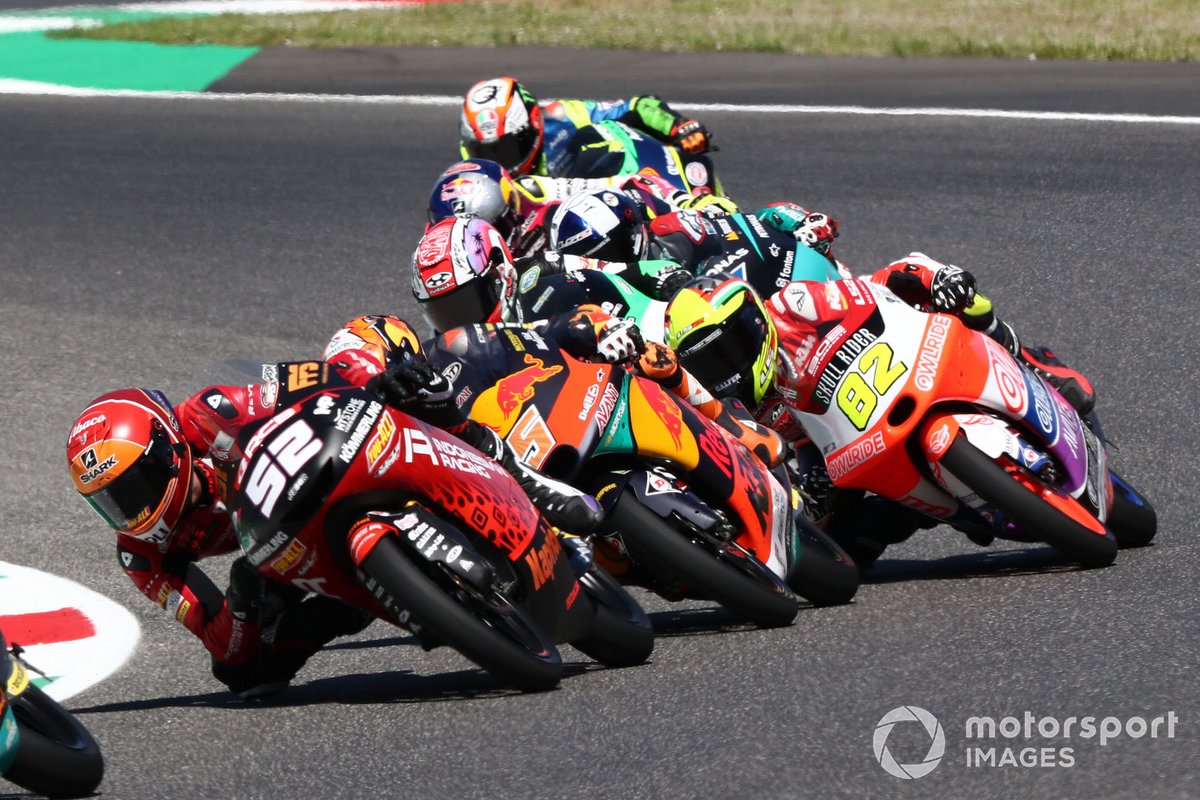 Quartararo feels the antics in Moto3 have become "stupid" and took aim at the fact Race Direction has seemingly been overlooking this while at the same time going to extremes over track limits.

"Just to add one thing: we talk about MotoGP, but looking at the last laps of Moto3 I think there is more things to talk about with Moto3 safety than MotoGP because it's totally stupid to see everybody cutting [the throttle] on the last two laps with what happened last week," Quartararo said.

"We talk about details, OK the rules of one second is the rule, but for me gaining time or not is OK. But we lost one guy three weeks ago, so they need to focus a little bit more on the smaller categories."

Quartararo's argument is pertinent, but it's not new either. Rossi has long felt some of the aggression in MotoGP nowadays can be traced back to the fact the racing in Moto3 is wild and this is setting the precedent for young riders coming through. He too had similar views to Quartararo about what happened in Moto3 in Barcelona.

A lot of the current contempt for Race Direction – and the Stewards Panel in particular, which hands out penalties – stems back to a knee-jerk reaction in the wake of the Rossi/Marc Marquez fallout at Sepang in 2015. 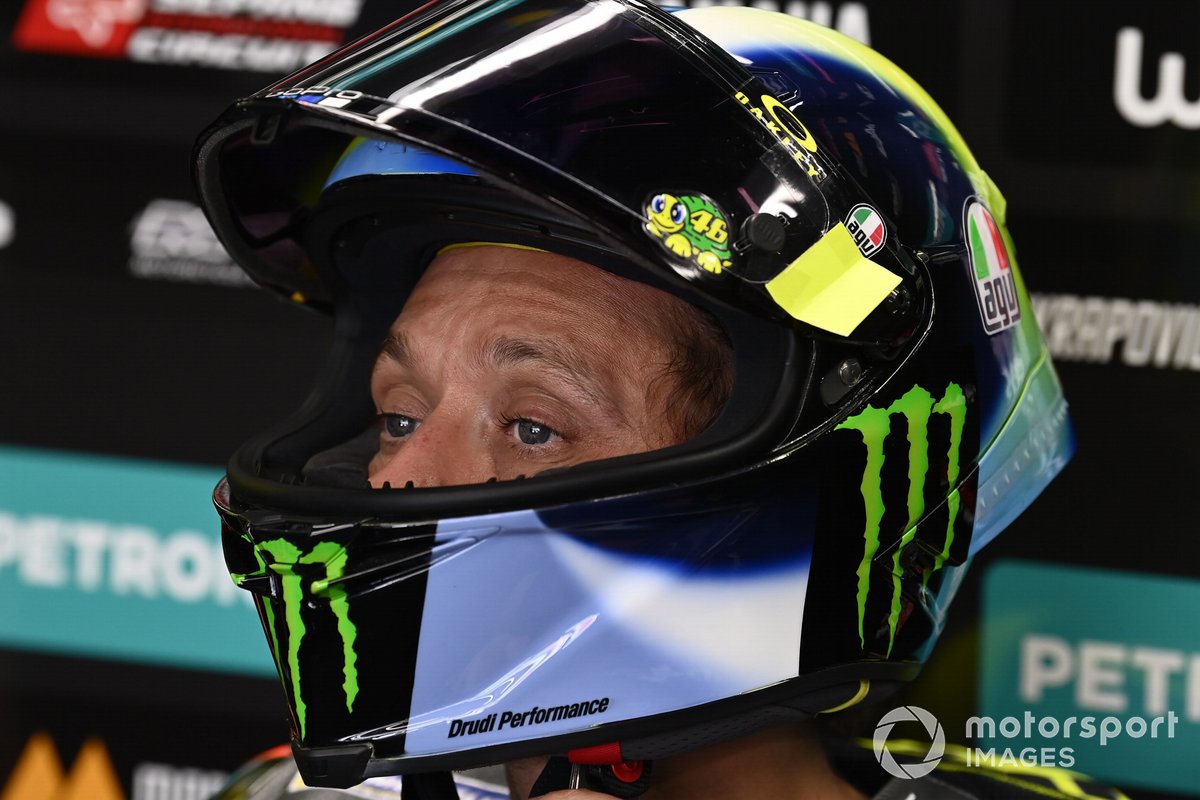 Rossi wasn't penalised for an incident that led to Marquez crashing out of the Sepang race, with the Yamaha rider going on to finish third and keep his title hopes alive for the final round. This decision was criticised at the time, and the backlash when Rossi was hit with a back-of-the-grid start for the Valencia finale was massive for the Italian's fans – the paranoid talk of sabotage and conspiracies first started by Rossi only heightened it.

The Stewards Panel was set up in 2016 to separate Race Direction's duties of managing races from the need to also judge penalties.

An element to this that can't be helping is the fact the Stewards Panel is helmed by double 500cc world champion Freddie Spencer. The American is an experienced racer, but has no recent MotoGP experience. It's not unreasonable to think that someone who has raced modern MotoGP machinery would have a much better understanding any incidents.

Miller is correct: Race Direction is necessary and someone does need to be there to enforce the rules.

But it's clear the system needs to be carefully analysed and changes implemented to restore some of the confidence in Race Direction that appears to have gone missing from some of the grid.