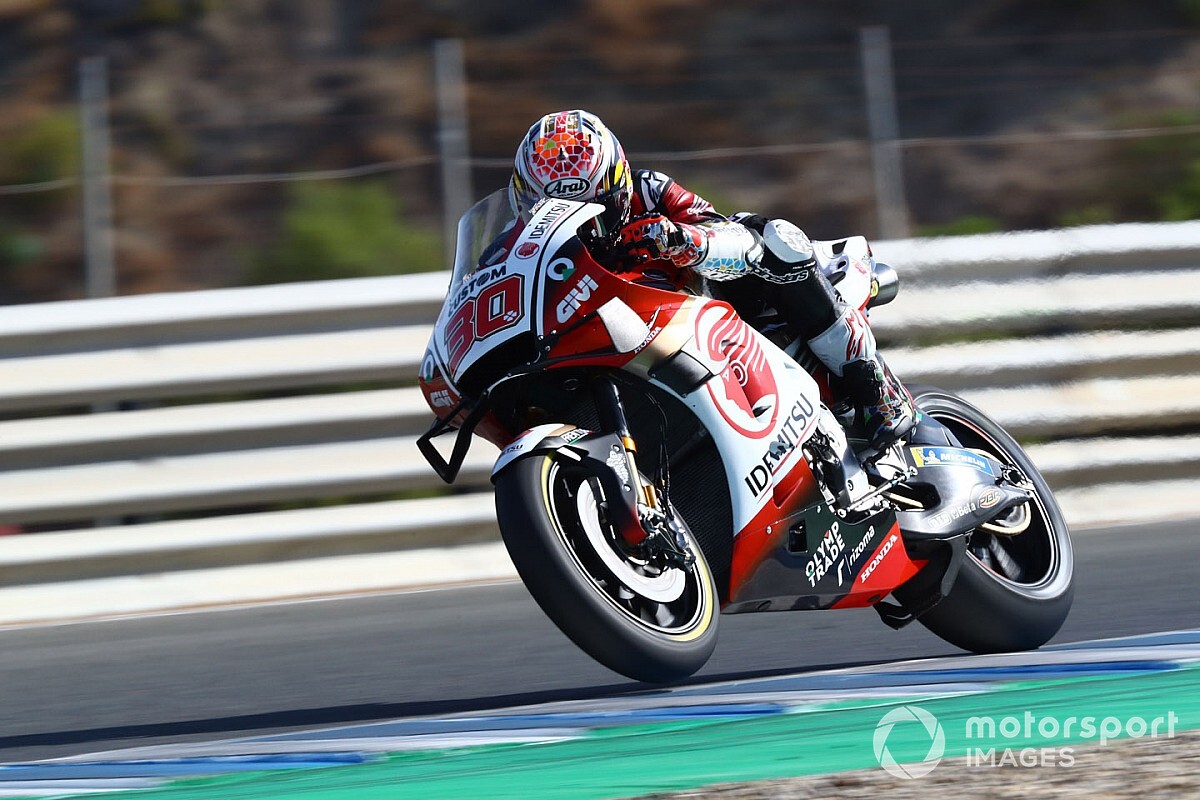 LCR Honda rider Takaaki Nakagami was a surprise leader in the second practice for the MotoGP Andalusian Grand Prix ahead of Avintia Ducati’s Johann Zarco.

Riding the year-old RC213V, Nakagami led the session early on with a 1m38.704s, and reclaimed the position at the death to end the afternoon 0.155 seconds clear of the field.

Pol Espargaro led the early charge with a 1m38.761s, before KTM teammate Brad Binder took over top spot with a 1m38.441s.

Zarco would cause further problems for KTM with around 20 minutes to go, when the touring Avintia rider caught Espargaro out in the braking into Turn 2 and forced him into the gravel.

Espargaro, who had just taken over top spot with a 1m37.889s, ended up on the deck and couldn’t get the bike restarted.

In the final minute, Espargaro was finally dislodged from top spot by Zarco with a 1m37.870s, though this was immediately bested by Nakagami with a 1m37.836s.

Nakagami produced a quicker lap on his final effort to end FP2 fastest of all – though Maverick Vinales remains fastest on the combined times by virtue of his 1m37.063s in FP1.

Zarco held onto second ahead of Espargaro on the works KTM, with Franco Morbidelli fastest Yamaha runner on the Petronas SRT-run M1 ahead of works team counterpart Vinales.

Fabio Quartararo was sixth in the afternoon outing with a 1m38.132s, though currently doesn’t have a direct Q2 place having spent the day focusing on race set-up.

Joan Mir was seventh on the Suzuki ahead of Valentino Rossi (Yamaha), Pramac’s Francesco Bagnaia and his satellite Ducati teammate Jack Miller.

Binder was shuffled out of the top 10 in the end, with the works Ducati pair of Andrea Dovizioso and Danilo Petrucci trailing him.

Alex Rins was 20th as he put 16 laps on his damaged right shoulder, with LCR’s Cal Crutchlow a place ahead as he continues his recovery from a broken wrist.

Avintia’s Tito Rabat and Tech 3 KTM man Iker Lecuona were the other fallers in the session.