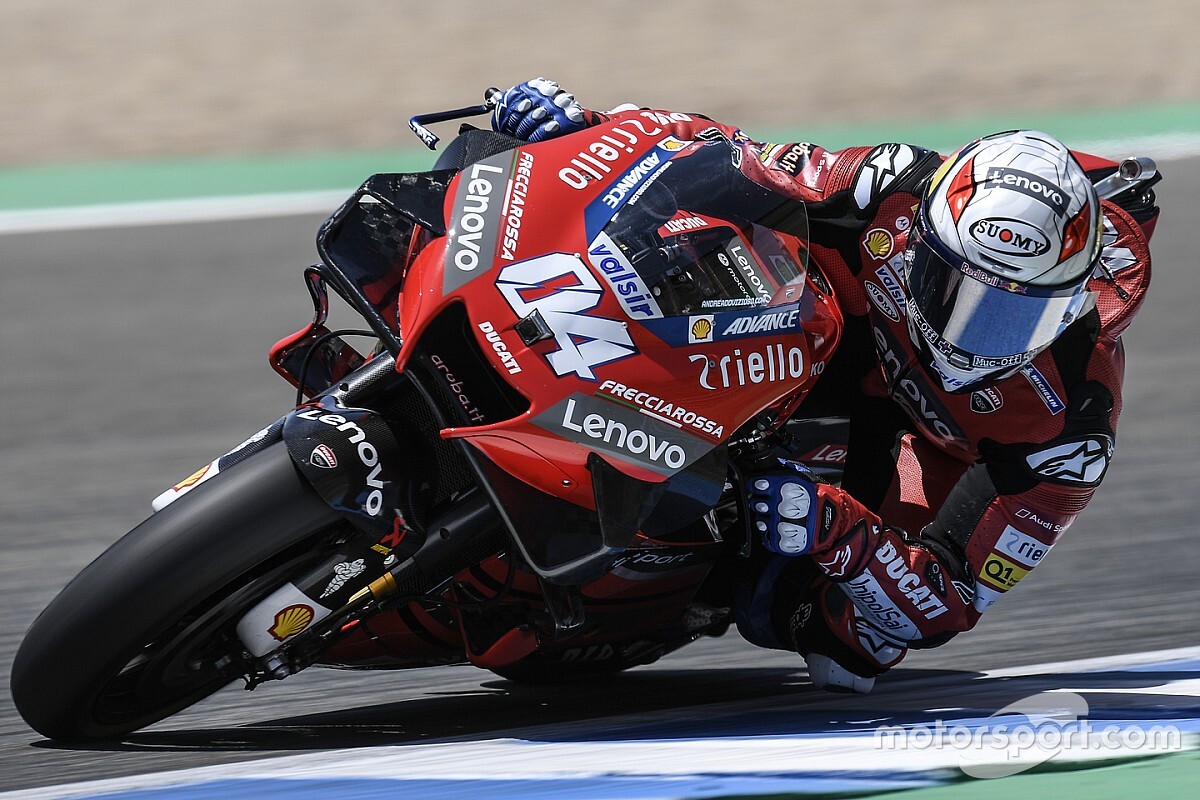 Andrea Dovizioso says he doesn’t want to “copy” what the Pramac Ducati riders are doing with the GP20, despite Francesco Bagnaia qualifying third for the MotoGP Andalusian Grand Prix.

Dovizioso failed to make it out of the first part of qualifying for the first time since the 2019 German GP, and will start Sunday’s second Jerez race from 14th on the grid.

Pramac’s Bagnaia grabbed his first front row start in third, while Jack Miller was seventh – four places and over half a second clear of the other factory team Ducati of Danilo Petrucci.

Both Miller and Bagnaia outqualified both factory team riders last weekend also, but Dovizioso beat both of them to third in the race – though he admitted afterwards that this was more down to him being mentally tougher than pure pace.

Dovizioso’s troubles with the 2020 Ducati have been largely caused by Michelin’s new construction rear tyre, while both Pramac riders have had no such issues.

But Dovizioso insists the Pramac pair aren’t faster on race pace than him, and so doesn’t feel copying what they are doing setup-wise and riding style-wise is the path to pursue.

“The situation is different from last year, [the] tyre [too], and most of the time Bagnaia and Miller are able to make a really good laptime when they put new tyres on,” Dovizioso said on Saturday. “But if you look at the [race] pace, they are not faster. So, they are good to do that [one lap].

“But I don’t want to copy their riders. I’m trying to study, to understand what we can do. Every rider has a different style, so you have to find the best way on your way to go fast because it’s the best way to be fast and to be strong in a race because in the end you have to be consistent and strong in the race.”

Petrucci made an improvement from last weekend by getting through to Q2 directly but said his FP4 and qualifying were a “disaster” as he encountered the “same story” with the bike in struggling to brake and turn.

“In the afternoon I struggled a lot to keep the corner speed, I struggled to stop the bike and nothing is better,” Petrucci said in response to a question from Motorsport.com.

“We had a small issue with the second tyre [in Q2]. I was quite happy about the result of this morning [in FP3] because I felt we could stay in the mix. But in the afternoon, it was more or less a disaster and for sure we cannot keep the pace of the first [riders].

“For sure in qualifying I didn’t make my perfect lap, but in the afternoon I struggled in the hot temperature a lot to stop the bike.”