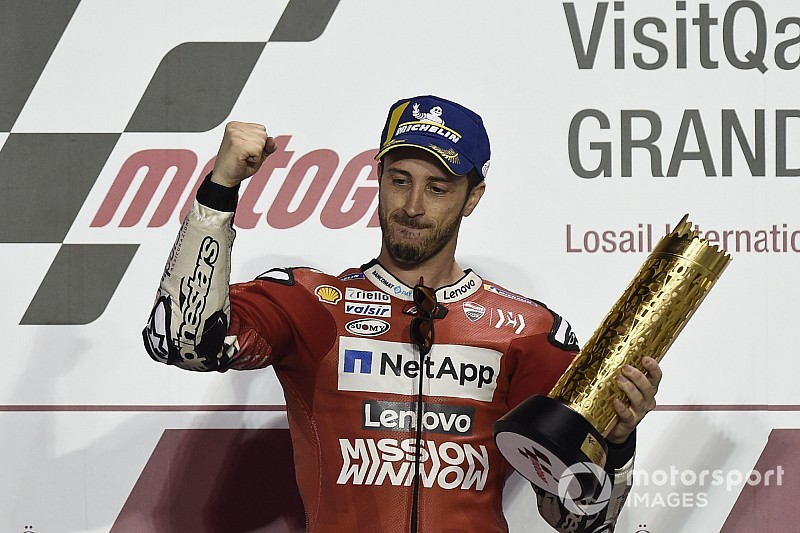 Aprilia Racing CEO Massimo Rivola believes that Andrea Dovizioso should keep his Qatar Grand Prix victory, regardless of the outcome of Friday's appeal regarding the legality of Ducati's MotoGP winglet.

Ducati will argue its controversial appendage should be allowed to remain on its bikes in front of the FIM Court of Appeals on Friday.

Rivola will join representatives from Honda, Suzuki and KTM in making the case for it to be banned on the grounds that it provides an aerodynamic benefit.

But despite being one of the driving forces behind the initial protest against Ducati in Qatar, Rivola believes that the appeals court should not seek to overturn Dovizioso's victory.

"There must be no retroactive [change to the] result, Dovizioso should keep his Qatar victory and from the Argentine GP the Ducati must run without this device on its bike," Rivola told Motosprint.

"Spare the win, and then start to discuss a new rule on this subject."

Central to Ducati's case is the fact that MotoGP technical director Danny Aldridge gave approval to the Italian manufacturer to use the winglet in Qatar for the purpose of cooling the rear tyre.

Ducati general manager Gigi Dall'Igna warned that a lack of respect for the rulings handed down by Aldridge could establish a dangerous precedent.

"Having questioned the Federation's Technical Director, who is the only one by regulation who can decide whether something mounted on the bike is legal or not, there is the risk of becoming like a far west town in which the sheriff has also been killed," Dall'Igna told MotoGP.com.

"First they questioned the Technical Director, then questioned the first panel of judges [the race stewards]. This suggests a complete distrust of the Federation."

However, Rivola thinks Aldridge is at fault for failing to question Ducati's explanation for the purpose of the winglet.

"I think he [Aldridge] gave his approval based on the information that he had, that is what Ducati gave him," added Rivola. "But he didn't check well, he trusted their explanation.

"If he is acting in good faith, he should now explain that he has misunderstood this solution, and therefore that the rule must be redone.

"The technical director collects more information, then draws up a new technical document, and a new rule is added. And we would all be happier."

Why 2019 may be painful for racing's two latest gamblers