Last weekend's Aragon MotoGP race may have not been the most closely fought, but plenty of other riders besides the dominant victor turned in some eye-catching performances. Valentin Khorounzhiy assesses the field.

He celebrated the runner-up finish like he had won – and, truth be told, Lorenzo's second place was certainly a triumph. Despite qualifying on the front row, he was seriously uncomfortable with the tyres throughout the weekend, and the expectation was that Lorenzo would plummet down the order as the race went on. Not only did that not happen, but, crucially, he even outfoxed Rossi on a weekend where the Italian appeared to hold the upper hand. 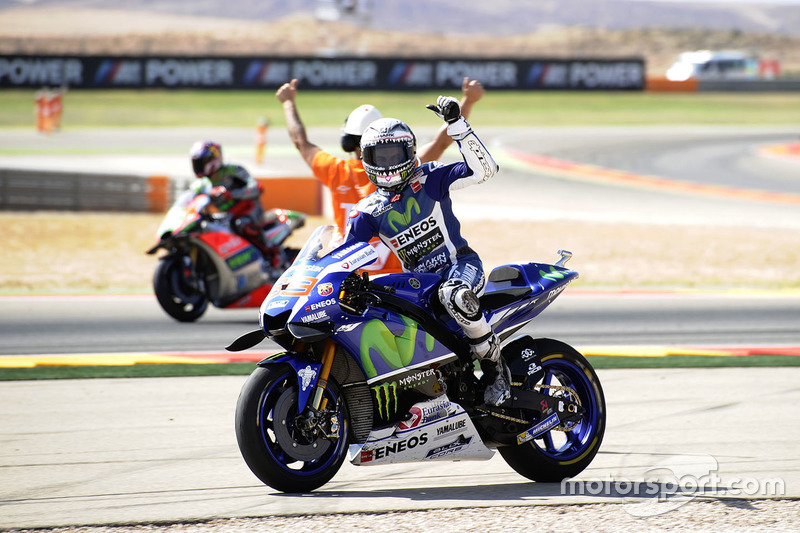 Underperformed, by his own admission, in qualifying, only to make up for it in the early stages of the race – a performance that would be rather typical of Rossi circa 2015. The problem was that he seemingly asked too much of the rear tyre in fighting Vinales and then Marquez, and if Vinales' own tyres had held up better, Rossi's misjudged attempt at passing Lorenzo in the closing stages could have left him off the podium entirely. 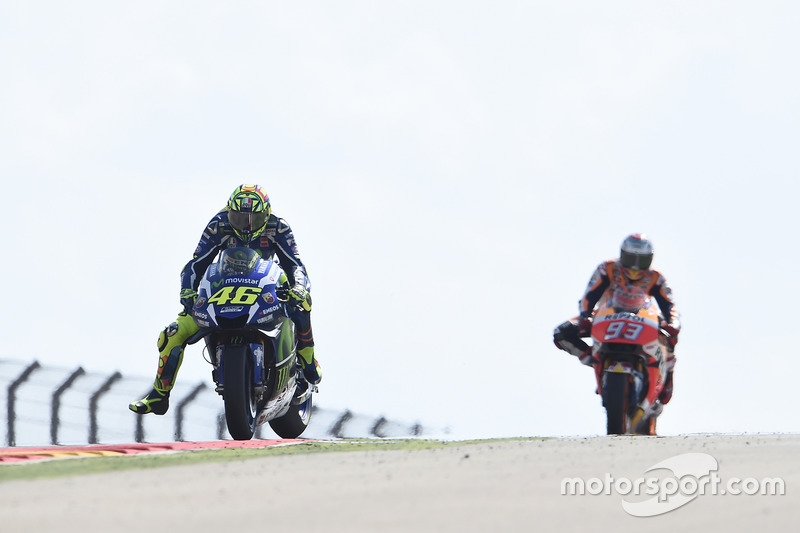 Marquez's Aragon Grand Prix weekend was not exactly flawless – not with the FP3 crash with Pol Espargaro and the lap 3 moment that nearly cost him what had looked like a surefire win. But, hey, perfection's no fun anyway. The fact of the matter is Marquez was a cut above everyone else and made the mistakes he could afford to make. And that sums up the 2016 season just as well as it does the Aragon GP. 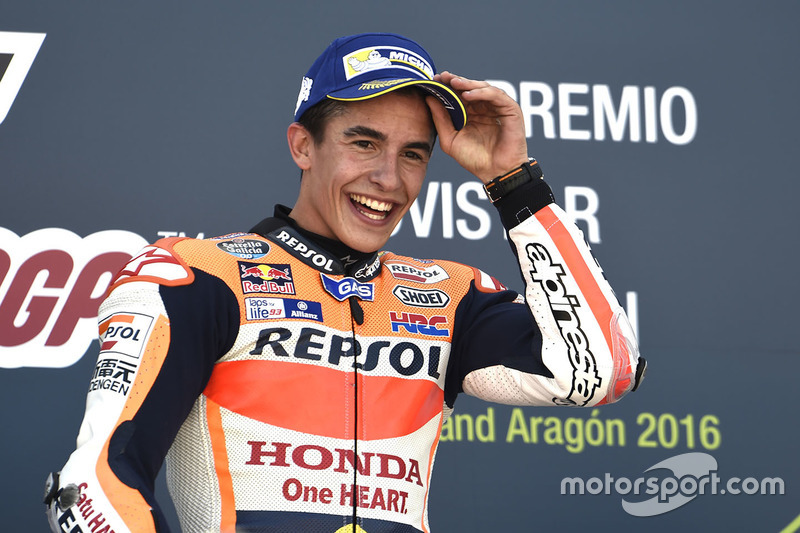 After his superb run at Misano, Aragon was an entirely expected regression toward the mean for Pedrosa, whose weekend was blighted by tyre issues and who simply could not get on terms with his teammate. Granted, he was closer to Marquez on race pace compared to one lap, and the issue with his front tyre in the race certainly didn't help, but even then finishing 17 seconds behind the winner will still leave a bitter taste in the mouth. 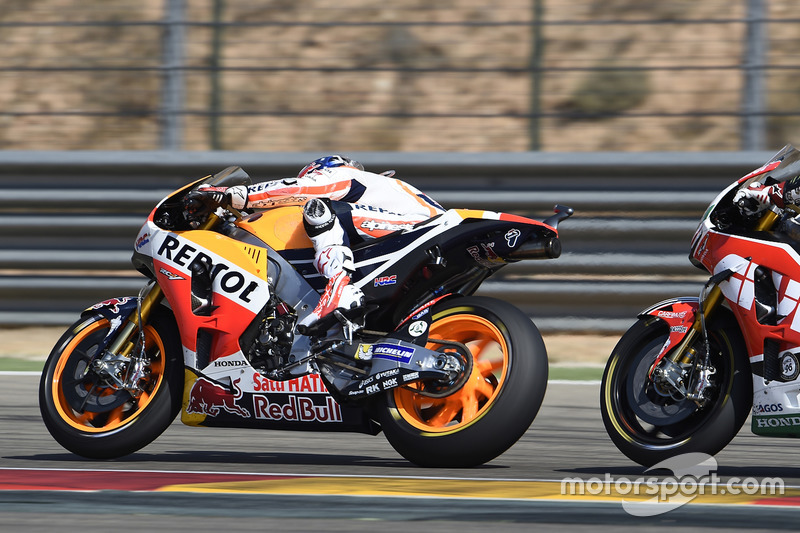 Going by indicators from practice, Dovizioso actually punched well above Ducati's weight at Aragon in qualifying fourth, although we won't know if Andrea Iannone – who usually edges Dovi over one-lap pace – could've gone better. Anyway, starting positions counts for little if tyre issues make the bike all but unrideable in the race and, in that context, Dovi actually did well to bring it home at all. 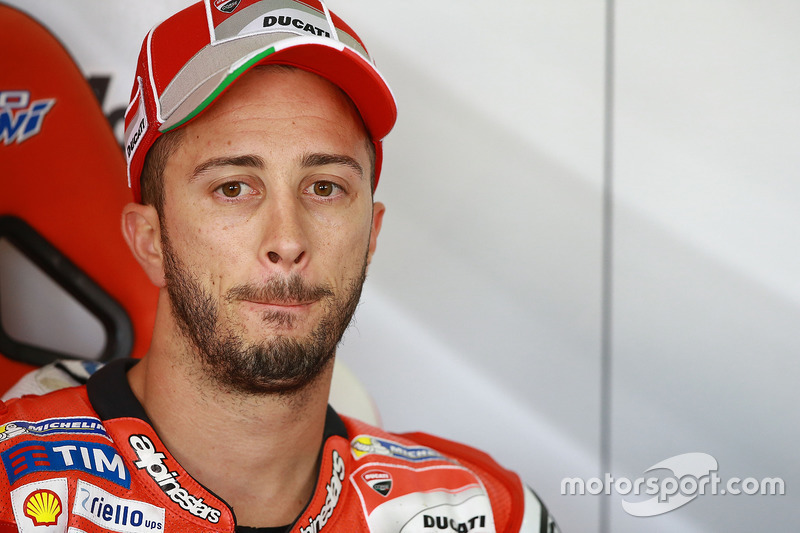 It was another mid-weekend call-up for Pirro to replace Iannone, but this time it wasn't the familiar surroundings of Misano and he hadn't done FP1 on a wildcard bike. As such, Dovizioso was understandably in a different league, although Pirro would've still done better than 17th on the grid if he didn't shunt in Q1. He kept consistent pace in the race and made decent inroads to finish less than three seconds behind his teammate. 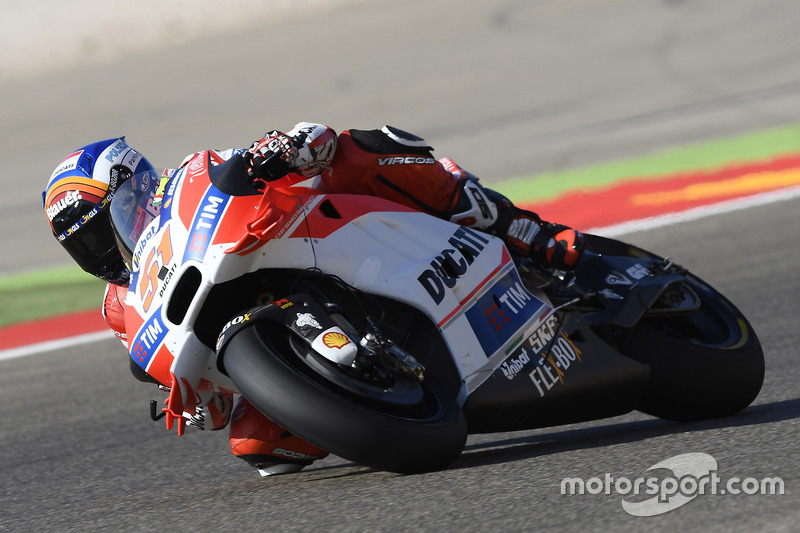 There is no longer much of a surprise in seeing Vinales qualify on the front row or run with the lead pack, dicing with Hondas and Yamahas – and if you don't think he's one of MotoGP's top riders yet, surely you have to admit he's getting there. His first few laps in the Aragon GP were pretty sublime, and while tyre wear soon caught up and mistakes started creeping in, this was nonetheless another impressive performance by Suzuki's top dog. 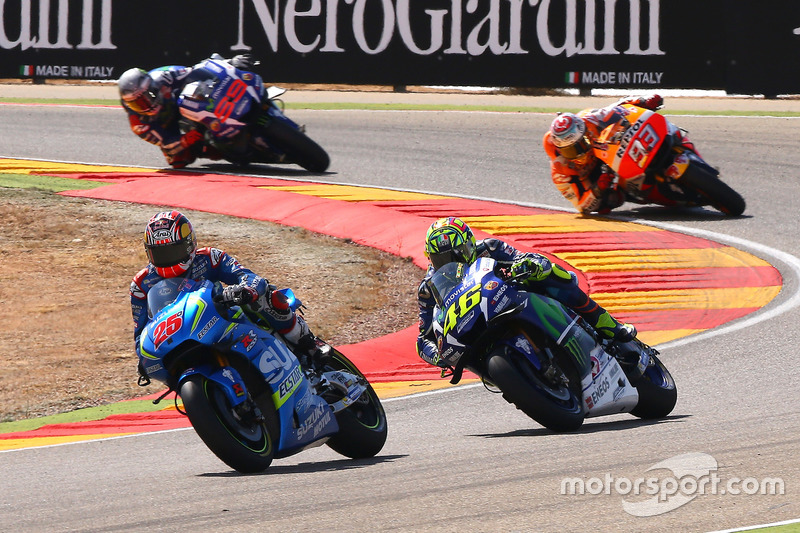 On the basis of Saturday practice, it was looking to be a promising weekend for Espargaro, but both qualifying and the race turned out to be generally underwhelming. He was half a second off Vinales in Q2 and was a little better in terms of average pace in the race, which allowed him to dice with Crutchlow and Pedrosa – but the two Hondas eventually came out on top. 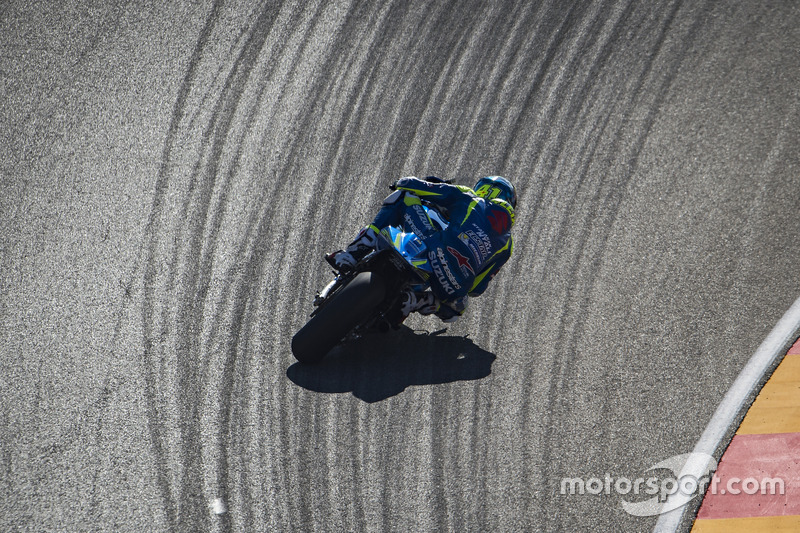 It's difficult to shake the feeling that, had MotoGP's silly season not been concluded quite so quickly, Crutchlow would have found himself in big demand with factory teams by this point. At Aragon, he was yet again the top independent and by very a healthy margin, managing to slot in between the two factory Hondas in both qualifying and the race. And it says much about his progress this year that the Briton was left disappointed not to finish higher than fifth. 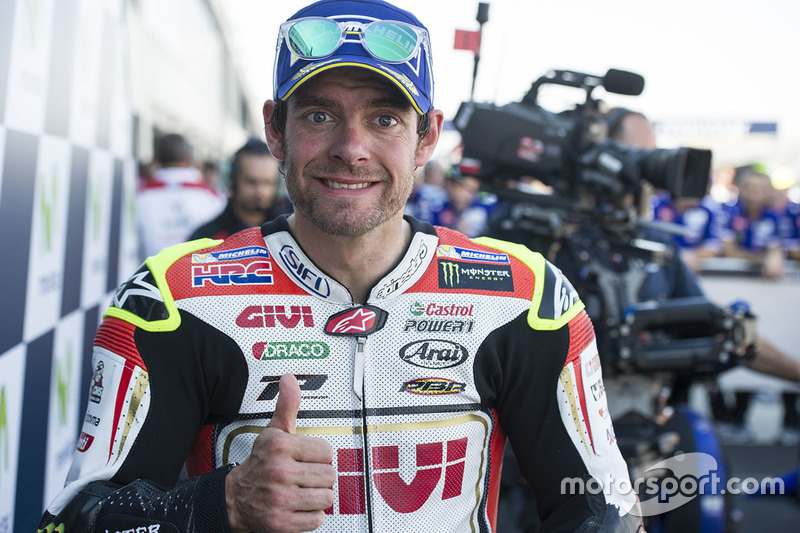 Espargaro looked to be heading towards a nightmare weekend when he crashed three times in practice – twice of his own volition and once with help from Marquez, the resulting damage from all three seriously curtailing his practice mileage. But after quietly qualifying in 11th and losing ground at the start, the Spaniard recovered to finish a comfortable eighth, securing more valuable points towards a very consistent campaign. 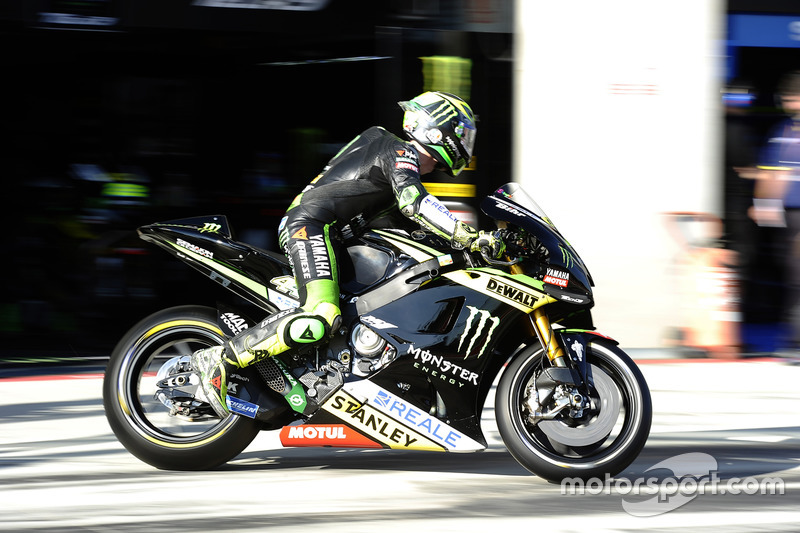 Colliding with your teammate is a pretty bad idea in any circumstances, but colliding with your teammate when the two of you are vying for a bike upgrade for next season is a complete disaster. Even if Petrucci's bike was ailing, he should've been a lot more careful in racing Redding. It would be extremely disheartening if his season was remembered for such clumsy incidents and not for his impressive riding earlier in the year. 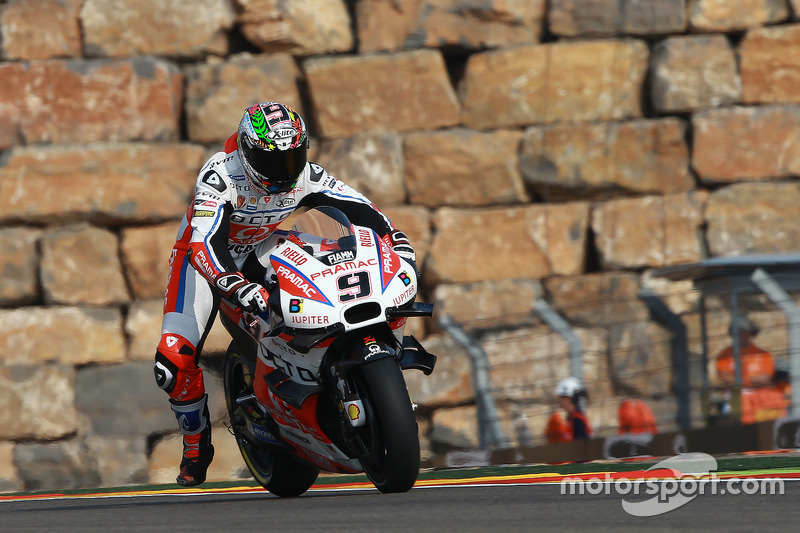 After a rather underwhelming Friday showing, Redding did well to find pace for Saturday, securing an automatic Q2 bye and then qualifying 0.006s off his teammate Petrucci. It's hard to tell whether the Pramacs would've been able to keep pace in the race and fight for the top 10 – as other Ducatis definitely could not – but Redding didn't even get to try, and it was certainly not his fault. 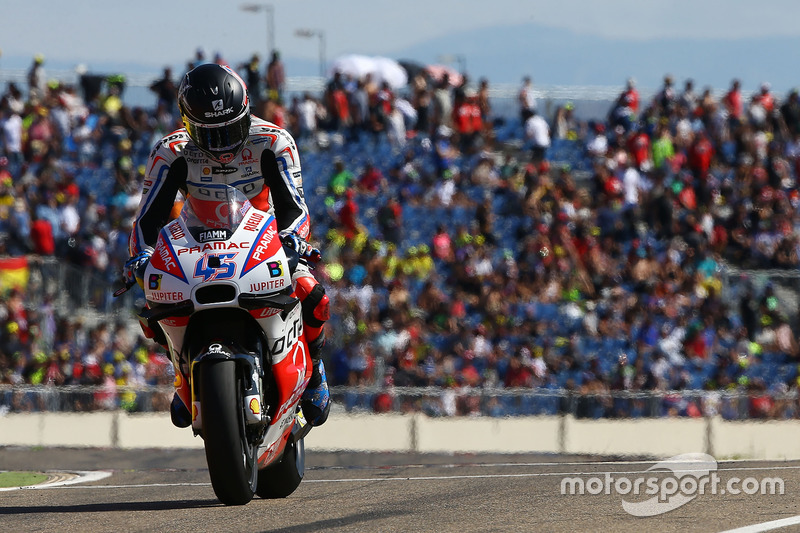 Drafted in to replace an injured Jack Miller, Hayden was left lamenting the fact that he ran out of time to truly get used to the bike, but that shouldn't take away from a stellar return by a much-liked former champion. He got quicker with every session, made a great start in the race – and while his solitary point was probably aided by teammate Tito Rabat crashing, there was almost certainly no more Marc VDS could've asked of Hayden. 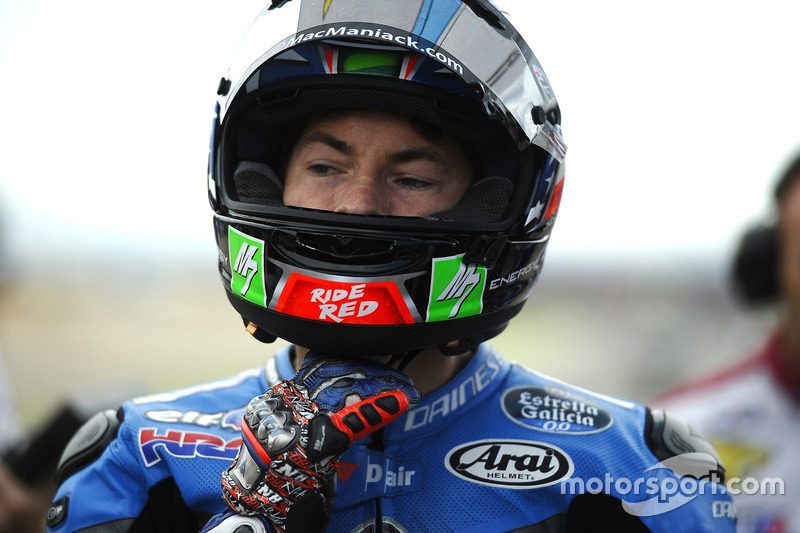 Marquez: Winning title in Japan would be “like winning lottery”

Mamola column: Why Rossi needs to watch his manners