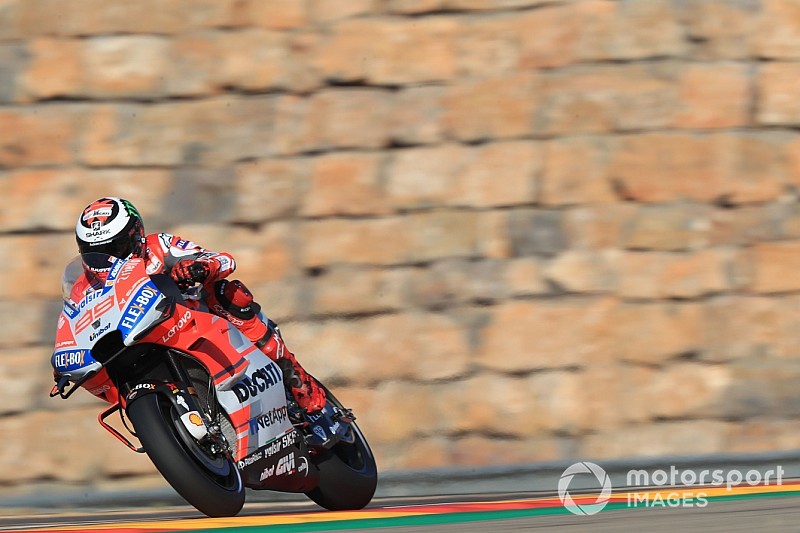 Jorge Lorenzo took his fourth pole of the 2018 MotoGP season at Aragon, edging out Ducati teammate Andrea Dovizioso by 0.014s, while Valentino Rossi toiled to 18th on the grid.

Lorenzo and Dovizioso both set their fastest times on their last runs, when almost the entire Q2 field bunched together in one long train as multiple riders cruised for tows.

Honda’s Marc Marquez had set the pace up to that point, concluding the opening runs with a best time of 1m46.960s to put himself just over a tenth clear of Lorenzo.

But Marquez was one of those to lose out in the final shuffle as he didn’t improve after a small mistake at Turn 12, slipping to third as first Dovizioso and then Lorenzo profited from the slipstream to go quicker.

In the end, Lorenzo’s 1m46.881s narrowly gave him a third straight pole over Dovizioso, with Marquez still only 0.065s down in third.

Cal Crutchlow managed to hang on to fourth despite crashing his LCR Honda at Turn 12 in the closing stages, and will lead Suzuki’s Andrea Iannone and the second works Honda of Dani Pedrosa on the second row on Sunday.

Danilo Petrucci (Pramac Ducati) was seventh ahead of Alvaro Bautista (Nieto Ducati), Alex Rins (Suzuki) and Jack Miller (Pramac), who was not part of the main group of riders.

While Vinales managed to escape Q1 by topping the session, his Yamaha teammate Rossi was only eighth-fastest, marking his worst qualifying performance since the 2006 Dutch TT.

The Italian was only fifth-fastest on the opening runs, half a second slower than Vinales, and then in the closing minutes of the sessions he coasted around looking for clear space on-track and simply ran out of time to post a hot lap.

It means he starts 18th, his lowest grid slot since he was sent to the back of the grid for the 2015 title decider at Valencia.

The Italian will therefore head up the fifth row on Sunday ahead of Johann Zarco’s Tech 3 Yamaha and the lead Aprilia of Aleix Espargaro.

Bradley Smith, KTM’s sole runner again after Pol Espargaro’s practice crash on Saturday morning, starts 16th after being held up by traffic on his final hot lap ahead of Karel Abraham’s Nieto Ducati and Rossi’s Yamaha.

Jordi Torres brought up the rear in Q1 and will make his MotoGP debut starting 23rd on his Avintia Ducati.