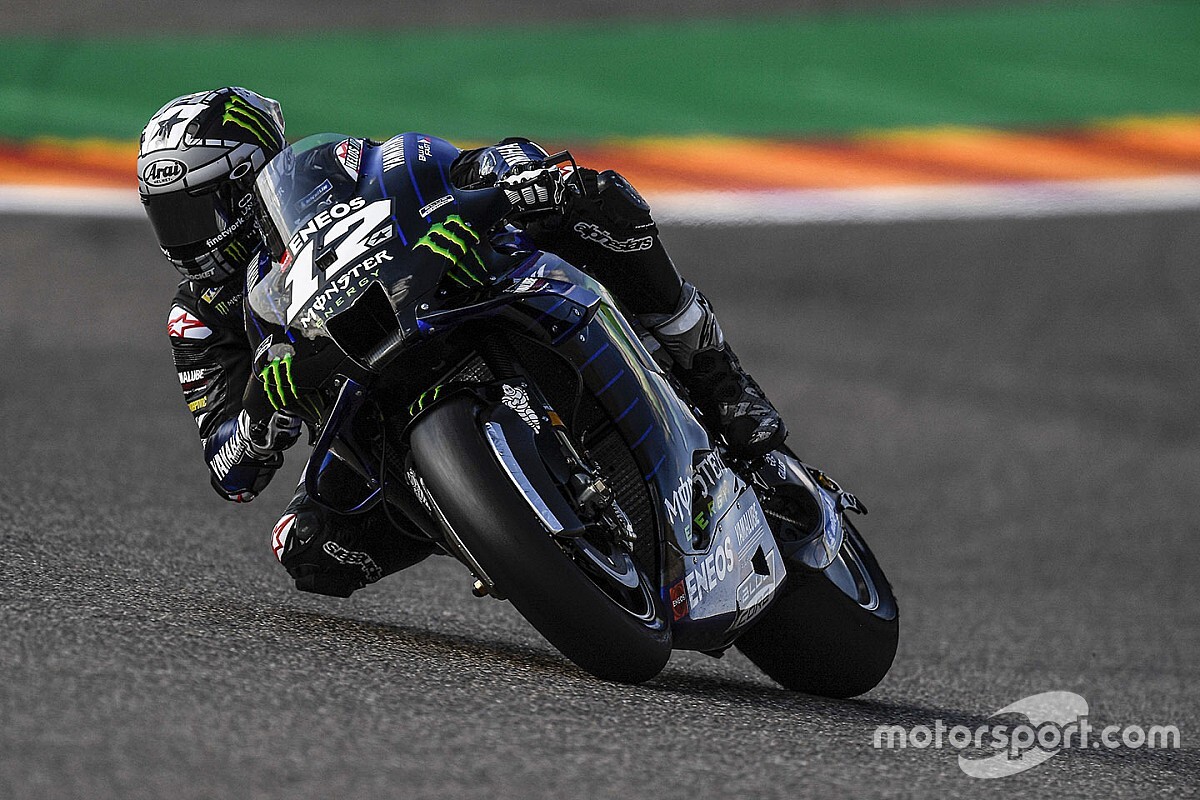 The first 45-minute session of the Aragon weekend was delayed by over half an hour owing to the extremely low temperatures, as Michelin’s tyres need a minimum of around 12 degrees on track for its compounds to work safely.

Once the session finally got under way, KTM’s Pol Espargaro set the first meaningful lap time with a 1m51.032s, before championship leader Quartararo on the Petronas SRT Yamaha edged ahead with a 1m51.005s.

Quartararo leads the standings by 10 points over Suzuki’s Joan Mir ahead of Sunday’s 10th rounds.

The Frenchman improved to a 1m50.677s, which stood as the benchmark for around six minutes before teammate Franco Morbidelli produced a 1m50.533s.

The Italian further improved to a 1m50.433s, though his session was interrupted in the final 10 minutes when he crashed at the Turn 14 right-hander.

The cool and windy conditions would catch out a number of riders, with Avintia’s Johann Zarco the first to be bitten by the cold when he wrecked his Ducati at Turn 14 10 minutes into the session.

Fellow rookies Alex Marquez (Honda) and Tech 3’s Iker Lecuona – who was top of the timesheets briefly at the start of the session – also took trips into the Turn 2 gravel traps.

Around 10 minutes after Morbidelli went to the top of the standings, Vinales on the sole factory team Yamaha after Valentino Rossi was ruled out with COVID-19 deposed him with the first sub 1m50s lap of the session – a 1m49.866s.

Due to the conditions and the promise of better ones this afternoon, few went out for a soft tyre time attack at the end of FP1, which meant Vinales would go unchallenged through to the chequered flag.

Morbidelli held onto second despite his crash ahead of his teammate Quartararo, who limped away from a crash at Turn 8 right at the end of the session.

Marquez jumped up to fourth late on despite his earlier tumble with a 1m50.176s ahead of LCR’s Takaaki Nakagami and the Suzuki of Mir.

Pol Espargaro was seventh on the lead KTM from the sister LCR bike of Cal Crutchlow, while Alex Rins (Suzuki) and the Aprilia of Aleix Espargaro rounded out the top 10.

Last year’s Moto2 race winner at Aragon Brad Binder was 11th on his KTM, with Jack Miller the leading Ducati runner on the Pramac GP20 in 12th on a 1m51.219s.