The second round of the 2016 MotoGP season was an unusual affair with mid-race bike swaps, crashes galore and some unfamiliar names high up the order. Jamie Klein examines who stood out. 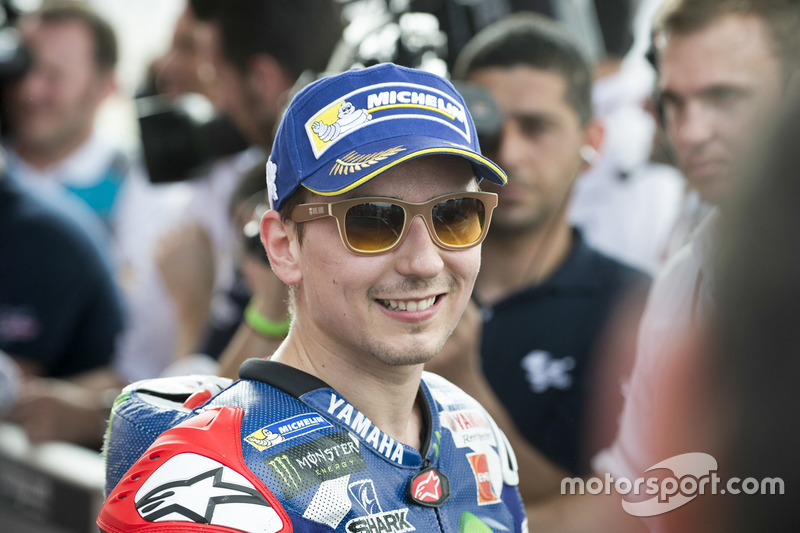 In the reigning champion’s own words, a “weekend to forget.” Yamaha was particularly disadvantaged by the grubby track surface, but Rossi adapted to it better than Lorenzo, who had already slipped to sixth when he crashed out on a damp patch – which will only supply ammunition to his critics who argue he can only win when everything is perfect. 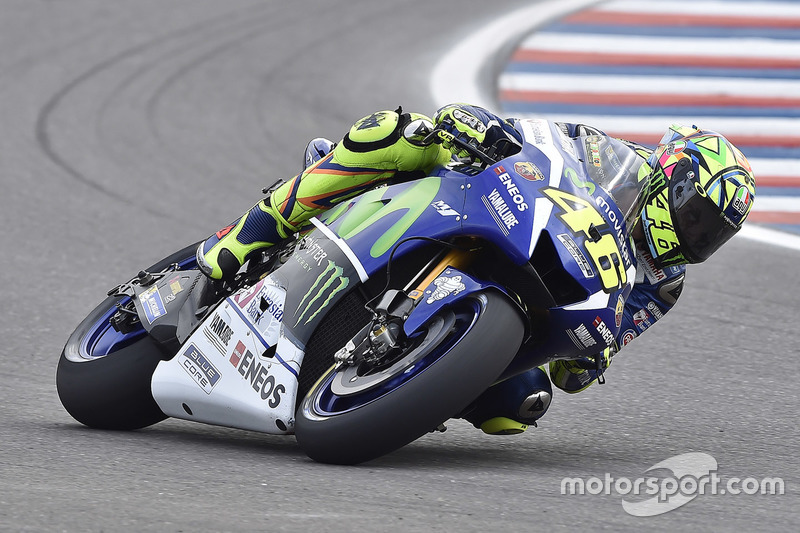 A late crash for Vinales and Ducati’s self-destruction meant Rossi was fortunate to come away with second, but ‘The Doctor’ deserves plaudits for outqualifying Lorenzo – something he doesn’t manage often these days – and for simply keeping everything together in a difficult race and extracting the best possible result behind a rampant Marquez. 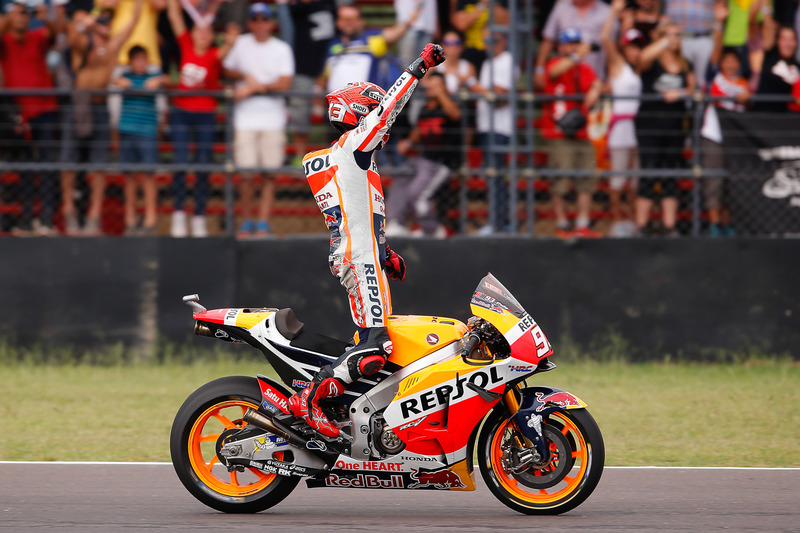 The circumstances were admittedly peculiar, but this was Marquez back to his brilliant best. Always had a clear margin over the field in practice, and while this was reduced in qualifying as the track cleaned up, the race largely seemed a question of whether the Spaniard could stay attached to his Honda. He did, and 25 points were a just reward. 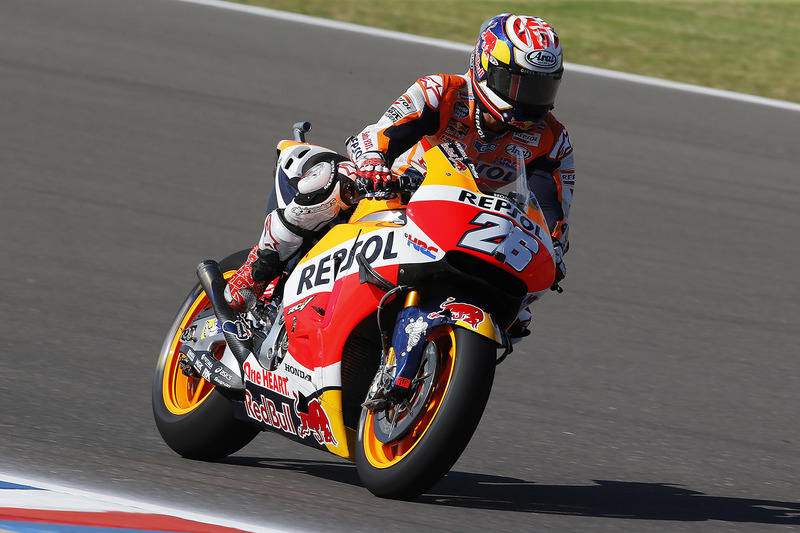 As per in Qatar, the contrast with Marquez was unflattering in Argentina for Pedrosa, particularly in race trim. Luckily for him, late exits for Vinales, Dovizioso, Iannone and Redding promoted him from what would have been seventh to a fortuitous third place, but the extra points do nothing to mask another sub-par weekend for the diminutive 30-year-old. 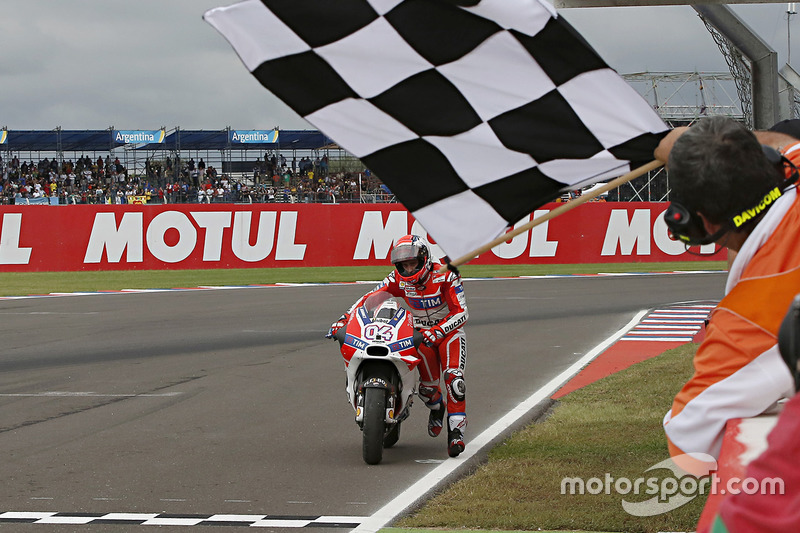 Andrea Dovizioso, Ducati Team pushes his bike across the line

Following an emphatic return to form at Qatar, it was a crying shame to see all Dovizioso’s efforts go to waste courtesy of teammate Iannone’s clumsy overtaking attempt at the final corner. Prior to that, the elder Andrea had done everything that could have been asked, qualifying as top Ducati and passing both Rossi and Iannone in one wonderfully opportunistic move. 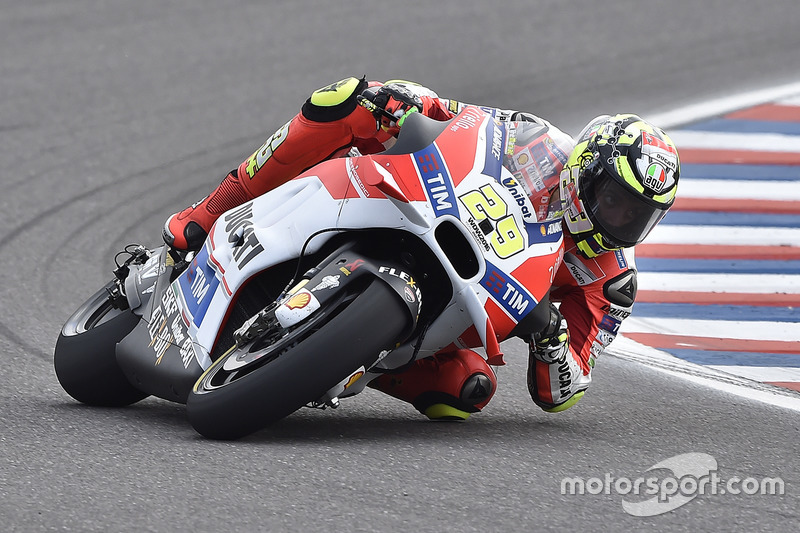 Two races, zero points for the man that looked on the verge of joining the elite ‘alien’ club towards the end of 2015. His last corner crash was especially calamitous, turning a certain double Ducati podium into a scant three points, and earning himself a three-place grid penalty for Austin to boot. Simply finishing has to be his priority at COTA. 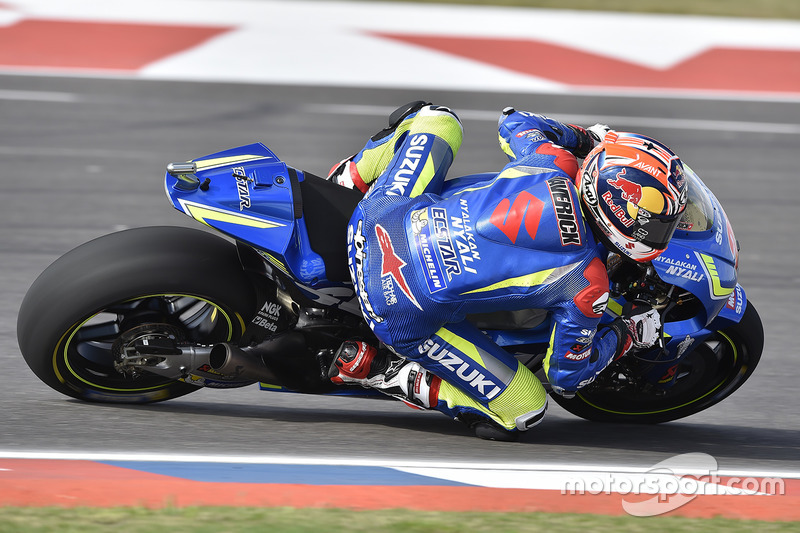 Another anti-climactic race for Suzuki’s number one, albeit for different reasons than in Qatar. There, he was spectacular in qualifying but less so on Sunday; in Argentina, he made up for a somewhat underwhelming grid slot by charging up to Rossi’s back wheel late on in the race – only to lose the front on a damp patch. His time will come. 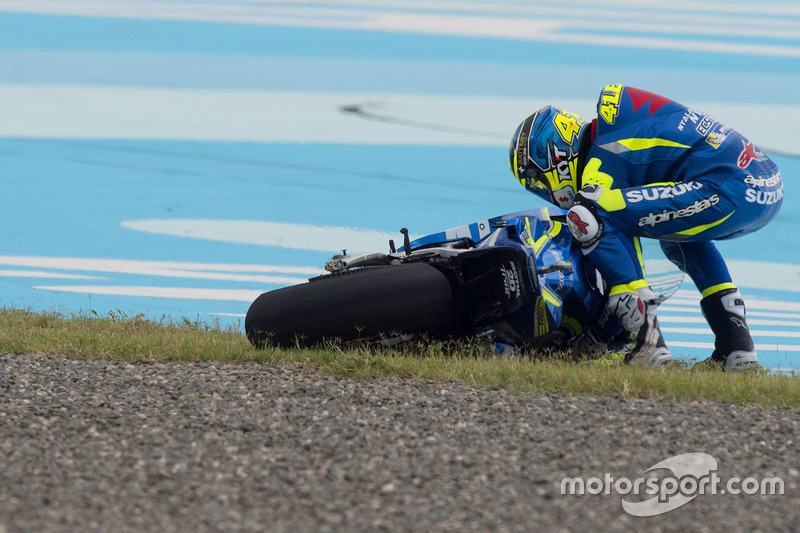 Once again outclassed by his upstart teammate Vinales, crashing at Turn 1 early on and hurting his left arm. That set the tone for the rest of the race, as the elder Espargaro slackened his pace accordingly in order just to reach the chequered flag and at least bank a few more valuable points for finishing 11th on a day of high attrition. 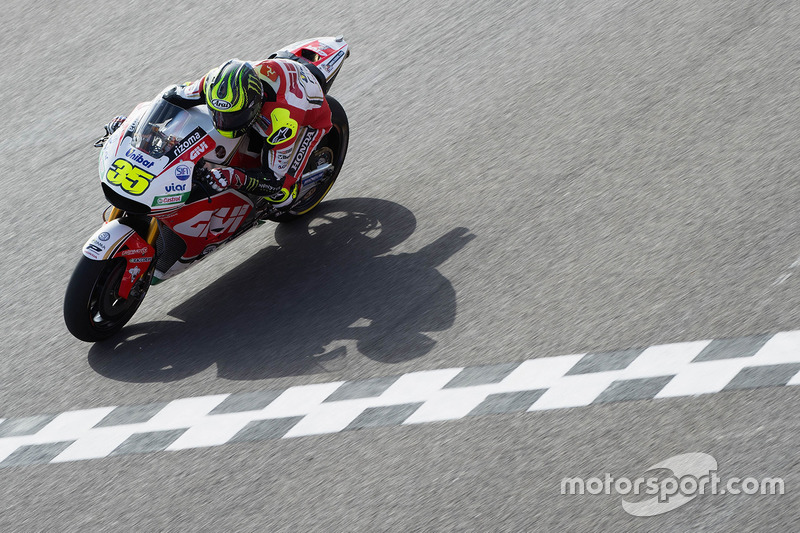 The LCR Honda rider was once again left fuming at himself for squandering another opportunity at big points – in Qatar, he felt his early fall had cost him a likely fifth, but in Argentina he could easily have found the bottom step on the podium given the drama that would ensue ahead, if not for the Briton crashing not once but twice. 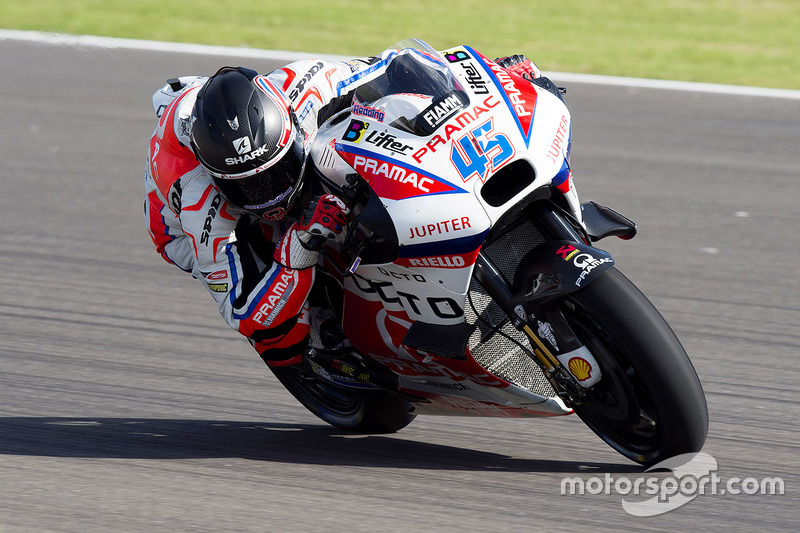 It was impossible not to feel for Redding after the dramas of Saturday, which had left a nasty-looking mark on his back, when his Pramac Ducati gave up the ghost shortly after the Briton had passed an out-of-sorts Pedrosa. At least he could take satisfaction in his strong race pace after overcoming the fuel consumption woes that held him back in Qatar. 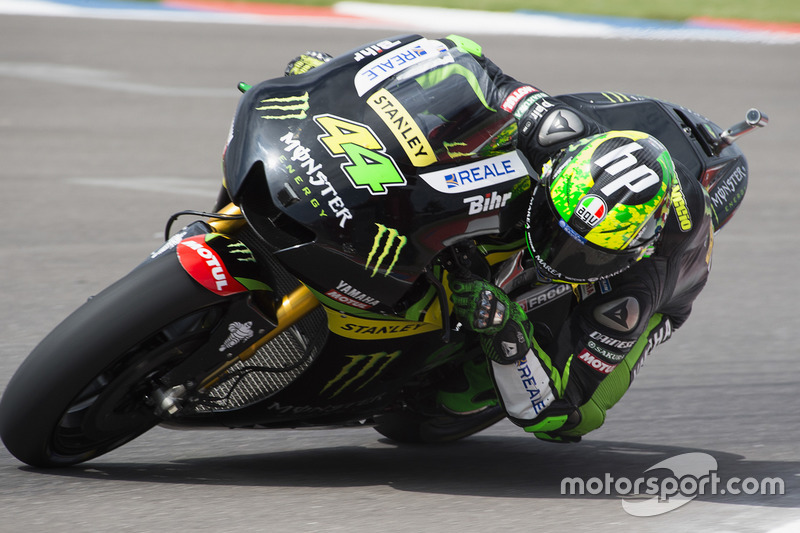 Was left unhappy to be battling the satellite Ducatis of Barbera and Laverty in the closing stages, their three-way scrap ultimately becoming the battle for fourth after casualties further up the field. Some last-lap grass-tracking didn’t exactly help his cause, but sixth place on a weekend that looked unpromising for Tech 3 was a job well done in the end. 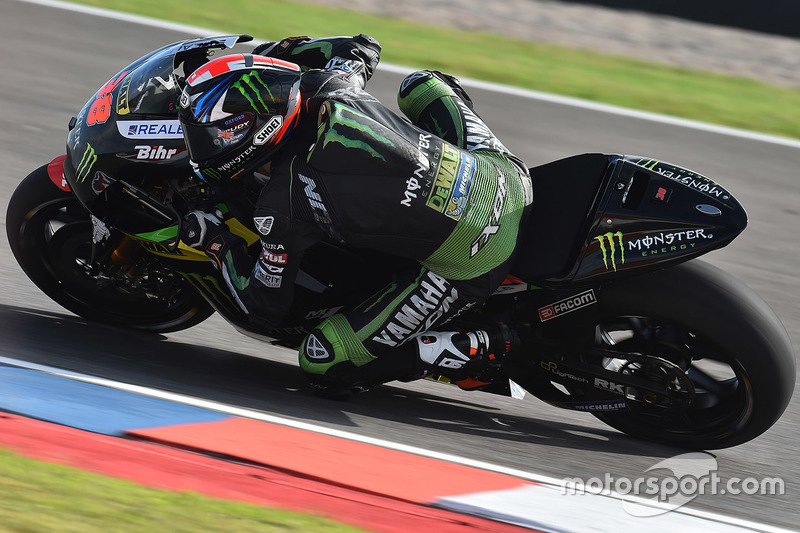 While Smith was only pipped by Espargaro by a tiny margin Qatar, the KTM-bound Brit always seemed to be a step behind for much of the weekend in Argentina, struggling to find a set-up that worked on the satellite Yamaha. After a dismal start, stuck at it to gradually salvage an eighth place finish as others’ challenges fell apart. 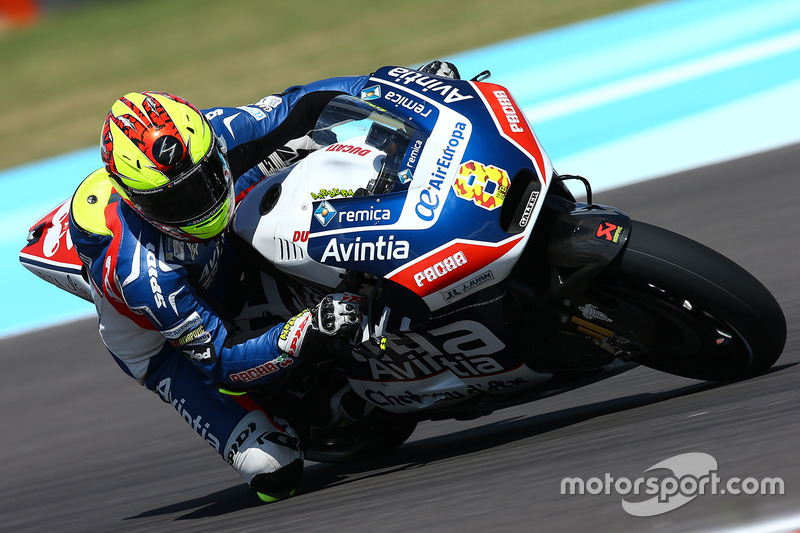 His pre-season form had always suggested an imminent breakthrough for the Avintia Ducati rider, and Argentina provided the perfect conditions for Barbera to show his class – qualifying in the middle of the third row and taking a superb fifth in the race. Only misses out on full marks for allowing Laverty through to clinch fourth on the final lap. 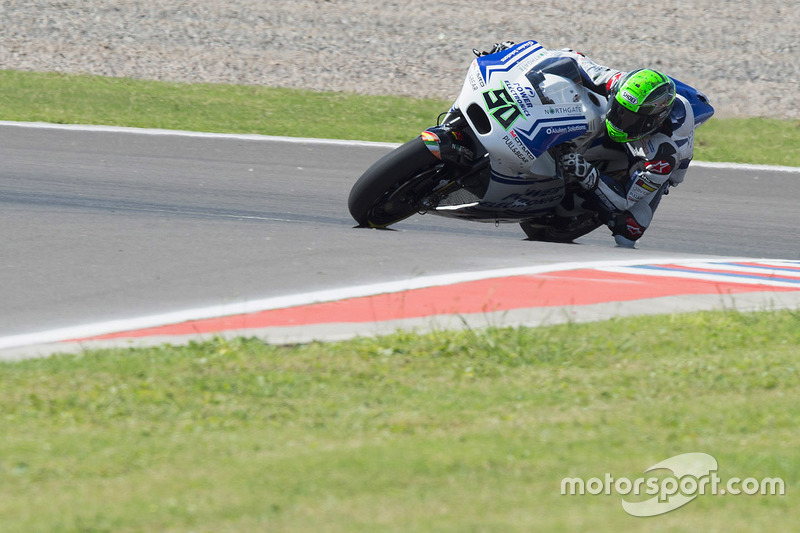 The Ulsterman scored only nine points all season on last year’s Open class Honda, and after just two races on Ducati machinery has already scored almost double that. Was already on course for a top 10 after the bike swaps, but some superb racecraft combined with a healthy dose of good fortune meant that became fourth place at the chequered flag.

Crutchlow: "No excuses" for crashing twice in Argentina