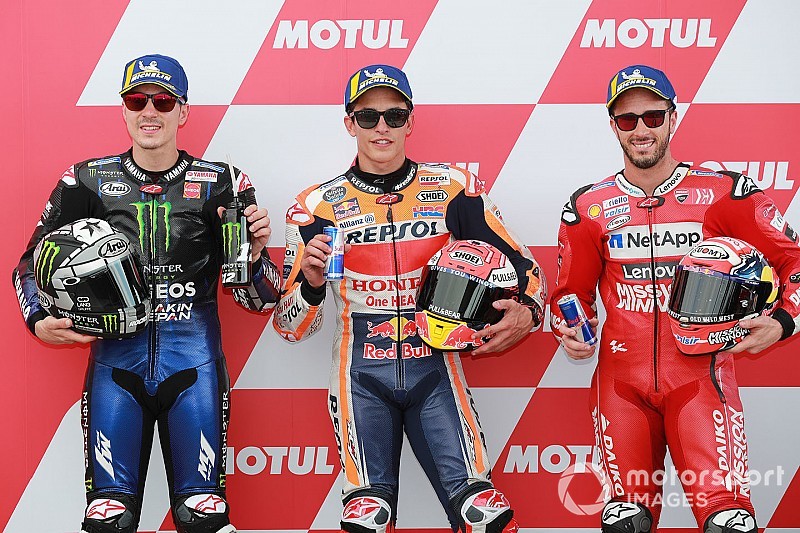 After topping the pre-qualifying FP4 session despite suffering a rare mechanical failure, Marquez seized the initiative early on in Q2 at Termas de Rio Hondo with an early benchmark of 1m38.767s.

LCR Honda's Cal Crutchlow was the only other rider to breach the 1m39s in the first runs, but when the second runs commenced it was Yamaha man Vinales that shot to the top of the timing screens with a 1m38.458s, the quickest lap of the weekend so far.

But on his final flyer, Marquez responded with a 1m38.304s to grab his fifth pole in six attempts in Argentina, beating Vinales by 0.154s.

Ducati's Andrea Dovizioso briefly went second behind Vinales with a time just a hundredth of a second slower, but was demoted to third when Marquez moved to the top.

Valentino Rossi narrowly missed a spot on the front row with a time 0.241s off the pace on the second factory Yamaha, while Jack Miller completed the top five on the Pramac Ducati.

Petronas Yamaha duo Franco Morbidelli and Fabio Quartararo bagged sixth and seventh on the grid ahead of Crutchlow, who failed to improve on his second run.

Takaaki Nakagami (LCR) and Danilo Petrucci (Ducati) completed the top 10, while Jorge Lorenzo qualified 11th, but had his best time deleted due to track limits at Turn 14, and will only start 12th behind KTM's Pol Espargaro.

The opening segment of qualifying was topped by Nakagami, who punched in an early lap of 1m39.279s and then improved to a 1m39.064s to stay on top throughout.

Aprilia's Aleix Espargaro held the other Q2 transfer spot after the opening runs with a time less than a tenth slower than Nakagami, but he was demoted by younger brother Pol in the closing stages.

That means he will head up row five, ahead of an impressive Miguel Oliveira on the best of the Tech 3 KTMs and Karel Abraham's Avintia Ducati.

Alex Rins could muster only the sixth-best time in Q1 on the best of the Suzukis and will start Sunday's race down in 16th, three places ahead of rookie teammate Joan Mir.

Johann Zarco will start his second race for KTM from 18th, while new Aprilia recruit Andrea Iannone ended up 12th and slowest of all in Q1, consigning him to the very back of the grid.

Argentina MotoGP qualifying as it happened