Marc Marquez continued his domination at Austin’s Circuit of the Americas by topping the warm-up for today’s MotoGP race, as Andrea Dovizioso – who starts 13th – was boosted by setting the second fastest time. 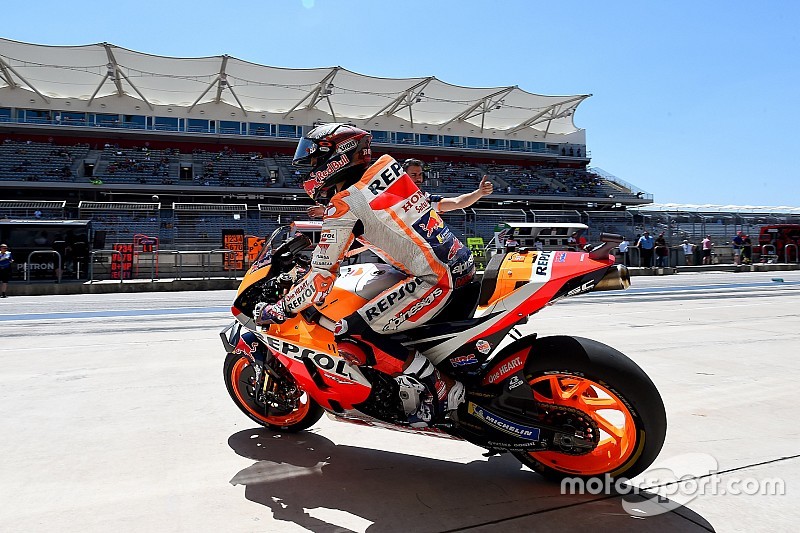 The 20-minute session was held in cold, dry conditions and featured a lot less wind than riders experienced in qualifying on Saturday.

Jack Miller set the early pace on 2m06.432s, but suffered a massive early wobble on the back straight, similar to Marquez on Saturday, and then almost dropped his Pramac Ducati at the fast Turn 10, using his knee to regain control.

Miller (using the soft front and rear tyre) then went even faster, working down to a 2m05.610s before Marquez (using a soft front and medium rear) claimed the top spot with 2m05.560s. Miller responded with 2m04.932s, which Marquez couldn’t match at that point.

But Marquez soon hit his customary top spot in the closing minutes, lowering the bar to 2m04.573s.

Yamaha’s Maverick Vinales, using the soft front and rear, rose to third with a lap of 2m05.207s, before Dovizioso topped him – by following Vinales around – with a 2m05.044s.

Cal Crutchlow was fifth fastest on his LCR Honda, ahead of the Yamahas of Valentino Rossi and Franco Morbidelli. Ducati’s Danilo Petrucci and the Suzukis of Alex Rins and Joan Mir rounded out the top 10.

Marquez had one scare in the session, when he ran deep at Turn 12 and just missed Hafizh Syahrin's Tech 3 KTM and Karel Abraham's Avintia Ducati.