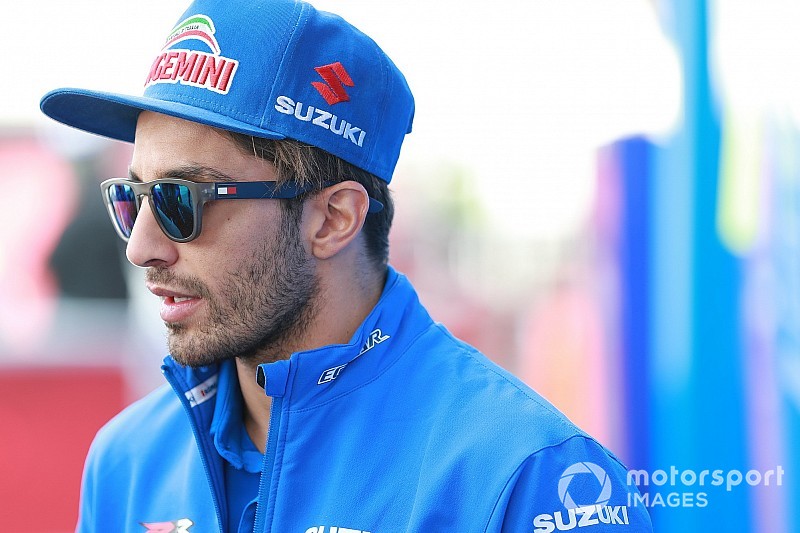 Iannone ultimately won out in his late scrap with Petrucci for Friday bragging rights, the Suzuki rider pulling 0.1s clear with his final lap of the session.

Crutchlow, however, didn't see the end of the session after being transferred to the medical centre via ambulance due to a heavy shunt at Turn 1 with 12 minutes to go.

Iannone took just five minutes to start knocking on the door of the FP1 times, using a hard rear to put his Suzuki on top with a 1m20.256s.

Andrea Dovizioso and Marc Marquez then both chimed in with 1m30s-dead times, the Ducati rider with a 0.02s advantage over his Honda rival.

A little under 10 minutes in Marquez improved to set a new benchmark for the weekend, a 1m29.739s eclipsing Maverick Vinales' FP1 effort.

The change at the top was followed by the first crash of the session, stand-in factory Ducati rider Alvaro Bautista dropping the front of his GP18 at Siberia.

Minutes later Marquez had his own drama at Siberia, a loose back end as he hit the brakes forcing him to abort the corner and straightline through the gravel. Seconds later, Valentino Rossi did exactly the same thing.

As the session neared the quarter-hour mark, Crutchlow went quickest with a 1m29.616s, Iannone then edging that time by just over a tenth on his next run with a 1m29.510s.

Any chance of Crutchlow improving disappeared with 12 minutes to go, the Honda rider taking a high-speed tumble at Turn 1 which resulted in an ambulance ride to the paddock medical centre.

With five minutes to go Dovizioso made his move on a soft rear, leaping from fourth to second with a 1m29.555s before going quickest with a 1m29.406s.

That sparked a brief Happy Hour, Vinales going fastest before being immediately replaced by Petrucci's 1m29.291s.

But a final flyer proved to be enough for Iannone, the Suzuki rider charging back into top spot with a 1m29.131s right at the flag. That bumped Petrucci back to second, followed by Vinales and Dovizioso.

Crutchlow was shuffled back to fifth thanks to his shunt, followed by Johann Zarco (Tech 3 Yamaha) and Marquez.

Bautista ended the day down in 15th after his crash, while his replacement at Nieto Ducati, Mike Jones, remained 24th.