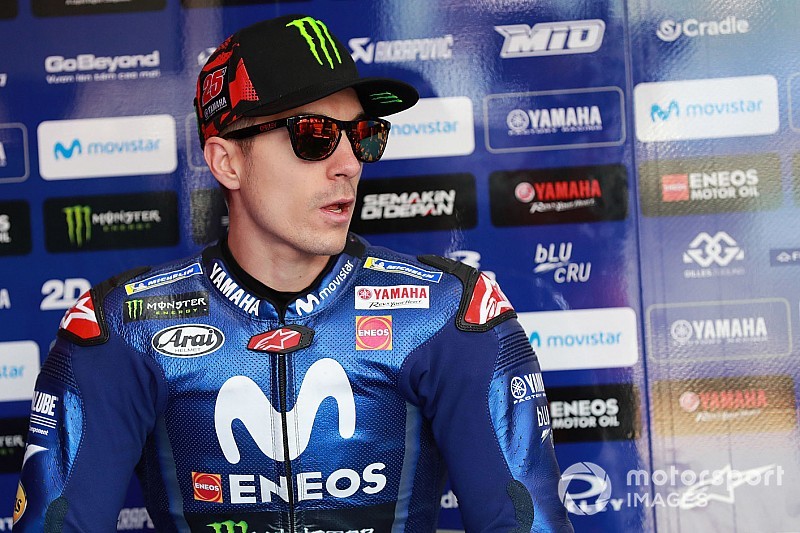 Vinales went quickest inside the first half of the session, the Yamaha rider's 1m29.952s proving unbeatable despite a number of improvements in the closing minutes.

His cause was helped significantly by Marquez dropping his Honda on the run into MG corner, having gone quickest in sector two with five minutes to go.

After earlier rain storms and oil slicks, dry conditions returned for the opening session for the premier class.

Times quickly skipped through the 1m31s and into the 1m30s, newly-crowned champion Marquez leading the way with a 1m30.500s before Cal Crutchlow took over with a 1m30.440s on the 15-minute mark.

It was at the point that Marquez had a brief scare at Siberia, barely holding on as his Honda tried to high-side.

Two minutes later Vinales out Yamaha ahead, going quickest with a 1m30.114s before improving to a 1m29.952s on his next lap.

The first proper shunt came with 20 minutes to go, Dani Pedrosa losing the front end of his Honda through the ultra-fast Turn 1. The Spaniard was quickly back on his feet, returning to action for the final quarter of the session.

He wasn't the only rider to have problems at Turn 1; five minutes later Valentino Rossi was forced to stand his Yamaha up and run straight off through the wet grass on the outside of the corner. He managed to keep upright, re-joining on the inside of Southern Loop.

The next rider down was Marquez, who lost the front end of his bike as soon as he hit the brakes coming into MG with five minutes to go. He'd just switched to a soft rear, and was set to go fastest after going quickest through the second sector.

Miller made his own switch to a soft rear for a final run inside the final five minutes, jumping to fourth and then second with a best of 1m29.989s on his Pramac Ducati.

That was as close as anyone got to Vinales' early time, the Yamaha rider left leading a trio of Ducatis led by Miller and followed by fellow late improvers Danilo Petrucci and Andrea Dovizioso.

Crutchlow (LCR Honda) slipped back to fifth thanks to the late improvements from the Ducatis, while Marquez was left down in sixth.

Alvaro Bautista was 14th on debut on Jorge Lorenzo's factory Ducati, the Spaniard's session ending in curious fashion as he was seen pushing the bike back to the pits.

Bautista's replacement at the Nieto team, Mike Jones, was 24th and five seconds off the pace - and a little over a second inside the 107 percent cut-off.