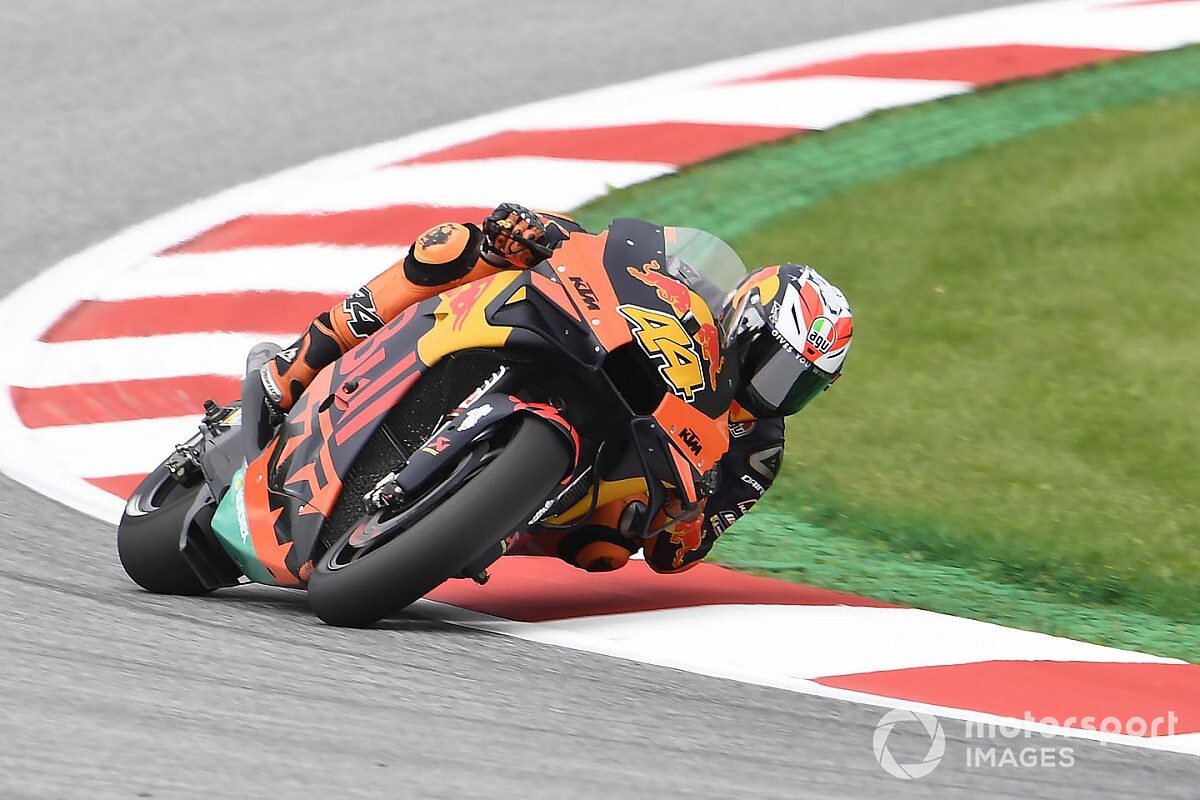 Championship leader Fabio Quartararo set the early pace in the opening 45-minute session with a 1m26.282s, though this was quickly beaten by Espargaro on the KTM.

Espargaro tested at Red Bull Ring during the coronavirus-enforced break along with KTM test rider Dani Pedrosa, and he used this relatively recent knowledge of the track to lead much of the session.

Due to the extreme heat build-up in the tyres at the hard-acceleration Red Bull Ring, Michelin has once again brought a special construction tyre to cope.

Ducati, and particularly Andrea Dovizioso, has struggled to get to grips with Michelin’s new construction tyre in use in 2020 – though Dovizioso on Thursday noted that the alternate tyre for the Austrian double-header could work in his favour.

Briefly hitting top spot with a 1m24.772s around 10 minutes into the session, Dovizioso would end the session just 0.044 seconds adrift of Espargaro.

Espargaro was briefly deposed by LCR’s Takaaki Nakagami on the year-old Honda, but fired in a 1m24.193s with three minutes remaining which would remain the best time at the chequered flag.

Joan Mir got the Suzuki up to third, 0.129s off the pace, but had his best lap cancelled for improving his laptime through a yellow flag sector for a crash for Aprilia’s Bradley Smith at Turn 4, which dropped him down to ninth.

That promoted Nakagami to third, with Alex Rins the lead Suzuki ahead of Petronas’ Franco Morbidelli leading the Yamaha charge on the ‘A-spec’ M1.

Fellow Brno podium-finisher Johann Zarco (Avintia) was sixth on the Ducati which won last year’s race in the hands of Dovizioso, with Tech 3’s Miguel Oliveira seventh on the KTM ahead of Pramac’s Jack Miller and Mir.

Quartararo completed the top 10, bumping his future factory Yamaha teammate and nearest title rival Maverick Vinales down to 11th late on in a frustrating session for both.

Danilo Petrucci (Ducati) headed Valentino Rossi on the other works team Yamaha, with Brno race winner Binder 0.812s off the pace down in 16th as he gets to grips with the Red Bull Ring on a MotoGP bike for the first time.

The injured Francesco Bagnaia has been replaced by Ducati test rider Michele Pirro at Pramac. He was 17th at the end of FP1 ahead of Aprilia’s Aleix Espargaro and Alex Marquez on the works Honda.