Bagnaia "lucky" to drop into Q1 in Assen MotoGP qualifying

Francesco Bagnaia says going through the first part of qualifying for the MotoGP Dutch Grand Prix was ‘lucky’ as it allowed him to find a key improvement on his Ducati.

Bagnaia was one of the high profile names unable to make it directly into Q2 from FP3 on Saturday morning, forcing him into a tight battle to escape Q1.

The Ducati rider successfully navigated his way out of the session and into the pole shootout segment, where he managed to drag a 1m32.116s out of his Ducati to complete the front row in third behind the factory Yamahas of poleman Maverick Vinales and Fabio Quartararo.

The fast and flowing Assen track has never typically favoured the Ducati, with its only win coming back in 2008.

Bagnaia admits the struggles he faced before qualifying were unexpected, but going through Q1 allowed him to find an improvement in corner entry at the track's fast turns, which helped propel him to third in Q2.

"We were not expecting to have this type of struggle this weekend," Bagnaia said.

"But we did a reset this morning and I started trying to do something different on the bike, and from this morning to the Q2 I did some improvements on the riding and step by step and we were closer.

"In FP4 my pace was not so bad but looking at the pace of the Yamahas, it's five tenths, six tenths slower. So, we need to do another step for tomorrow. 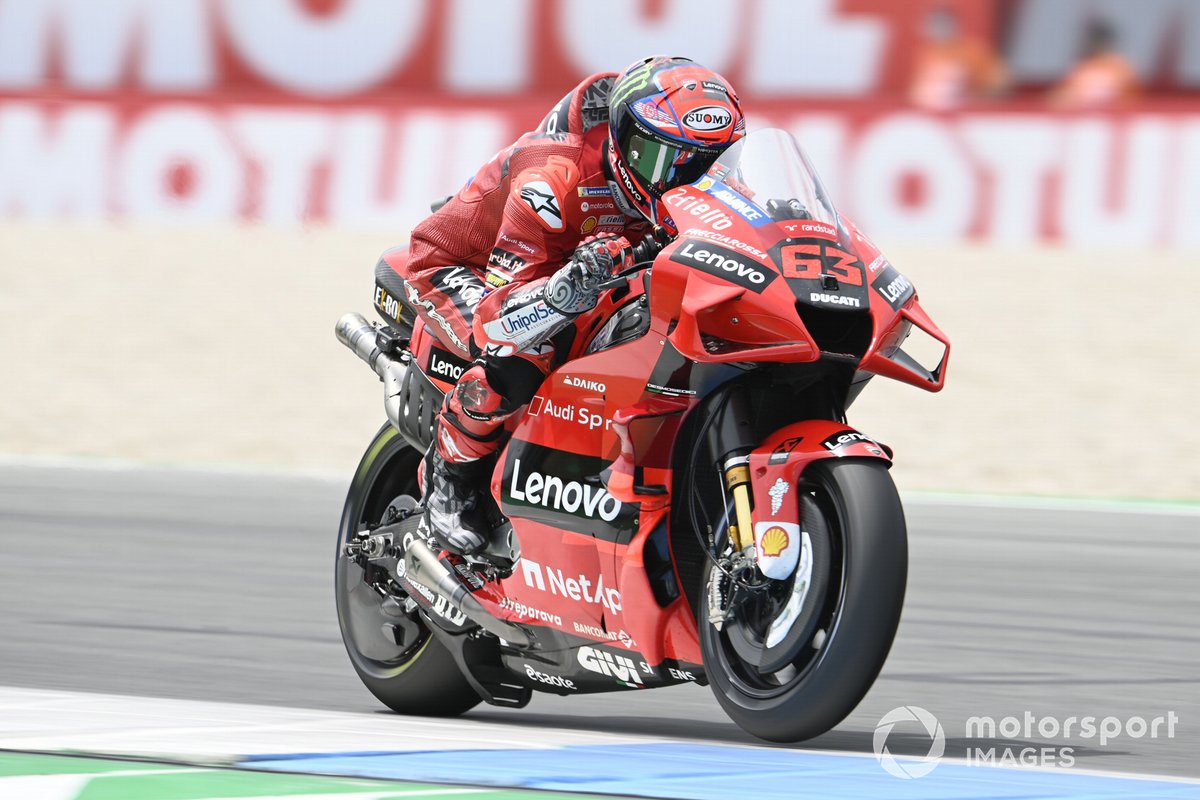 "So, for the first time I think that was a good thing – first of all because I passed through Q1, and second because I found something to help me in the fast corners."

After a strong run of three podium in the first five races, Bagnaia's form has dipped since crashing out of the lead in Italy – with the Italian seventh in Barcelona and fifth in Germany after average qualifying performances.

Bagnaia is confident of a strong result on Sunday at Assen but concedes his search for a maiden win will likely continue as the Yamahas are a step ahead on race pace.

"Every time we are missing something because in Sachsenring I had the pace to fight for the podium or to fight for the win, but starting in P10, and then for the first six laps my rear tyre wasn't working and it's something that sometimes can happen," he added.

"We don't know why, but it's the same thing for all the riders in MotoGP.

"Sometimes you have a tyre that starts to work after or doesn't start to work.

"After six laps I started to have my pace and in the end I had pace like Marc and Miguel, but I was too far.

"So, sometimes you are very fast like in Portimao and Mugello. In Mugello I made a mistake, but in Portimao a yellow flag cancelled my possibility to win.

"This time it's a different story because my pace is good but not as the Yamaha.

"I will try to stop them at the start of the race but it will be difficult to stay with them all the race."

Marquez: Assen FP2 crash “affected me a lot” on Saturday