Pramac Ducati rookie Francesco Bagnaia says he's still only “65 percent” of the way to feeling like a fully-fledged MotoGP rider despite his “incredible” laptime in the Sepang test.

Bagnaia, who graduated to MotoGP on a works Ducati contract after winning the 2018 Moto2 title, was just 0.063s adrift of Danilo Petrucci's track-record lap on the final day of testing at Sepang.

The 1m58.302s effort, which was more than half a second clear of Jorge Lorenzo's previous unofficial record at the Malaysian venue, earned Bagnaia plaudits in the paddock, including from mentor Valentino Rossi.

But when asked after testing how close he now felt to being a fully-realised premier-class rider, Bagnaia said: “Don't know, at the moment I think I'm 70 percent... no, 65 percent, is better.

“I need to improve in a lot of things. I have to understand how to be more constant with used tyre.

“[Friday] has been another step in front because I started with the used tyres and I made [1m]59.9[s] in the first exit, and has been very positive.

“But for the race pace I need to improve a little bit more because the [tyre] drop[-off] in the race is different, is bigger, and I have to understand how to use the [engine] maps and the tyres.”

The 22-year-old did add that he was “for sure” surprised about his best laptime.

“I was not expecting to make [1m]58s. My objective was 59s. 58s, beating the record, is incredible, I'm very happy. But this just mean that we make a good work.

“I understood a lot of things, most of all how to ride a MotoGP bike like a MotoGP rider, because in the first day [in Sepang] I started riding more similar compared to last year, with more middle[-corner] speed, and it has been very important to understand how important it is to have more traction in the exit.

“So I understood it was very, very important to stop more the bike and open gas.

“One other thing that I improve a lot was the braking because last year in November [testing] already has been difficult, but they [Pramac] make a good set-up for my bike and I'm very confident with the front.”

Bagnaia is riding a year-old Ducati Desmosedici GP18 this year, but the 22-year-old has already been named by the manufacturer as one of the contenders to join the works team in 2020 – when incumbent rider Petrucci's current one-year deal expires.

Despite his strong showing in Sepang, Bagnaia says his aim for the season remains unchanged.

“It's not changing at the moment,” he said. “I think that I make a good lap and also a good pace, but I prefer to be calm, to make step by step and arrive in Qatar with the same objective: be rookie of the year.” 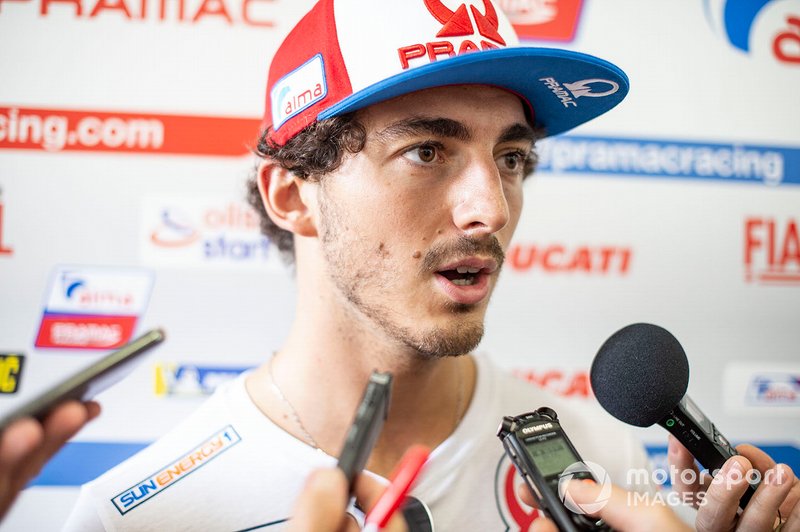