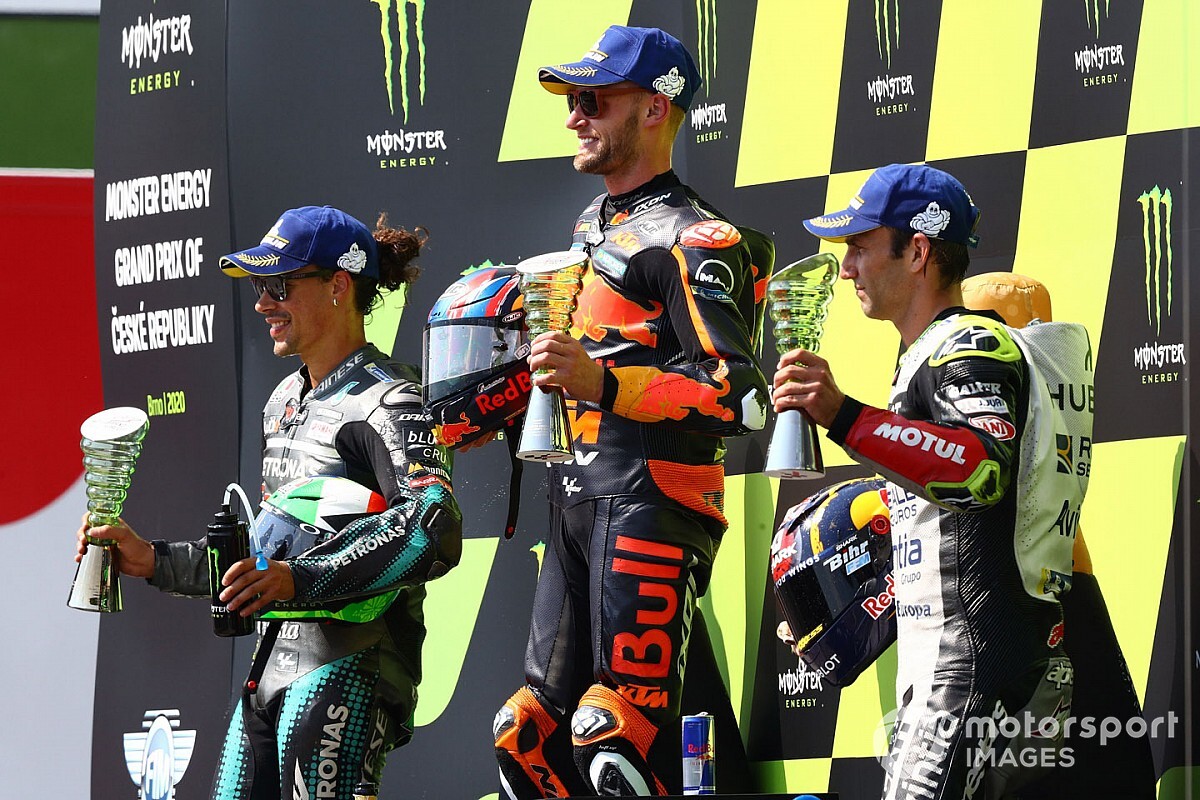 Johann Zarco says Brad Binder is "doing the job that I was not able to do" at KTM, after he took his maiden MotoGP win at the Czech Grand Prix.

Rookie Binder dominated the race at Brno on Sunday to score his and KTM's first ever MotoGP victory in just his third race, which he described as a "scary" achievement.

The South African was promoted to the factory KTM team following Zarco's dismissal after last year's Misano round, with Binder having initially been signed to Tech3.

Zarco struggled massively on the KTM last season, with the high point being a front row qualifying at a wet Brno, before a week later terminating his two-year deal after Austria – two rounds before KTM dropped him altogether.

But Zarco holds no ill will towards both KTM or Binder, saying the 2016 Moto3 champion's "fresh mind" is helping to make the difference he couldn't on the RC16.

"I'm pretty happy," Zarco responded when asked for his thoughts on Binder's win. "Even for KTM [I'm happy]. He's doing the job that I was not able to do.

"They made the big step during the winter with the bike. But he's coming with a fresh mind and this is helping much more to do the right job on the KTM.

"And he's proving already now in his third race. In Jerez he was pretty strong, and the other rider were lucky that he crashed because he could have been on the podium I think in Jerez.

"So, now that it was a bit tricky with the tyres [during the Czech GP], he got an advantage and he won."

Zarco started from pole for the first time since 2018, but a bad start left him with work to do in the early stages.

A collision with Binder's team-mate Pol Espargaro netted him a long lap penalty, though he was able to maintain third after taking it and fended off a charging Alex Rins on the last lap to claim his first rostrum as an Avintia Ducati rider.

Zarco says KTM's win leaves him with "no regrets at all" over his decision to end his two-year deal earlier, and thinks it's "perfect" for the marque that they now have Binder on the bike.
"No regrets at all, or [thoughts that] I should have been more patient, no," Zarco added.

"In the moment last year, I was struggling, I had to do a step for myself, a big decision to get some freedom and agree with myself, because I was feeling I was getting money to do nothing, to do shit.

"And this I didn't agree with. So, I had to be honest with KTM, telling them I don't want to do these things and I prefer to quit than do bad.

"It has been a huge step, but when I went to see Ducati in December, I got a different feeling. It was maybe a bit more of feeling like I had in Moto2.

"The bike gave me more confidence in February at Sepang and Qatar, so from that point I could work much better on myself.That's just perfect for KTM that they have Brad.

"He showed last year in Moto2 that he was the one that when there was big problems, [he could] go over the problems and win races.

"Now, maybe the bike did a huge step, but for sure a MotoGP bike is never a perfect bike. But he could ride it better, so he won."