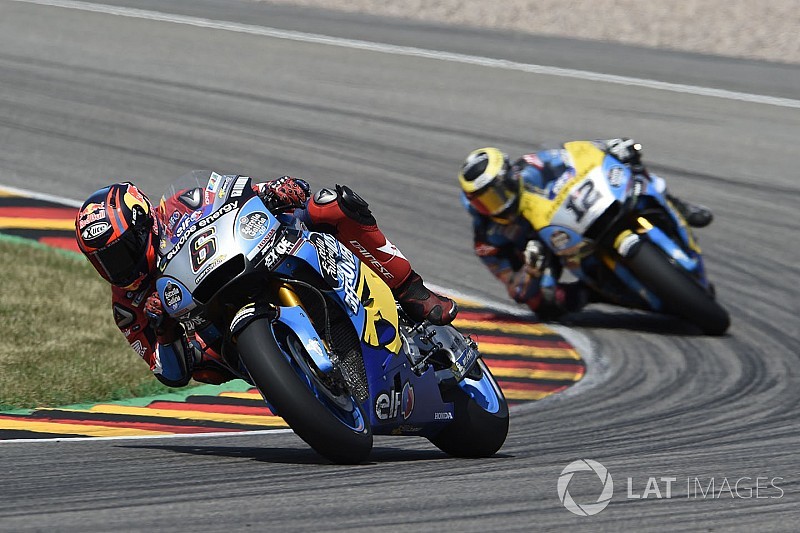 Marc VDS stand-in Stefan Bradl concedes he was too “timid” in the early laps of the German Grand Prix to break into the points on his MotoGP return.

Bradl was called up to replace an injured Franco Morbidelli after first practice on Friday at the Sachsenring and qualified 21st for his home race – one place ahead of teammate Thomas Luthi.

The Honda test rider rose as high as 15th in the early stages, helped by crashes ahead, but ultimately finished 16th, four seconds behind the final points-scorer, Aprilia rider Scott Redding.

Bradl – whose last MotoGP start came at Valencia in 2016, his last race for Aprilia – admitted it took him several laps to get up to speed, which ultimately cost him the chance of a points finish.

“It was an exciting weekend for me, happy to finish the race,” reflected Bradl. “It was like a dream come true to be back in MotoGP at my home GP.

“Of course it would have been nice [to score a point], but it wasn’t enough. I was too timid at the start.

“It was strange physically; I felt empty. I was asleep at the start and I need two or three laps to get the adrenaline to the level it should have been from the start.

“It got better after that, I had the tyre management under control quite well. The last laps were ok.”

Bradl will return to action after the summer break at Brno, where he’ll make the first of three planned wildcard appearances aboard a third factory-entered Honda.

The German rider says his target at the Czech GP venue will be to finish inside the points.

“I’m happy with the performance we did this weekend with the short amount of practice I had,” added Bradl. “I think I’ve still got something in myself to show, that I’m riding MotoGP not so bad.

“I hope I can also show some good performance in my wildcard in Brno. I want to score points next time.

“This was perfect chance to prepare myself for Brno, so thanks to HRC and the Marc VDS team for giving me this chance. Sometimes life can be crazy and you have to take these opportunities.”