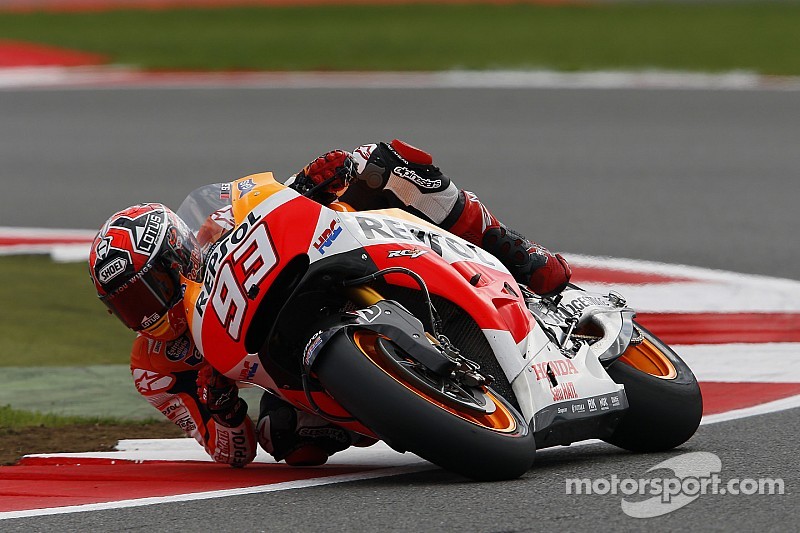 Marc Marquez’s best time was just a couple of tenths shy of his own outright lap record at Silverstone.

Marc Marquez was dominant in qualifying for the British Grand Prix on his Repsol Honda RC213V, the Spanish star setting a time of 2’00.829 to seize his tenth pole position of 2014 as he vies for a first MotoGP™ win at Silverstone.

Marquez’s best time was just a couple of tenths shy of his own outright lap record at Silverstone, which he set last year in much warmer temperatures, but was enough to see him finish 0.311 seconds ahead of Ducati Team’s Andrea Dovizioso who continued his impressive form by claiming his third consecutive front row start. Movistar Yamaha MotoGP’s Jorge Lorenzo was third quickest in qualifying, the two-time World Champion overcoming a difficult first day at Silverstone to claim the final slot on the front row for the British Grand Prix.

The weather today was even cooler than yesterday with a peak track temperature of just 26°C recorded during FP4; 11°C cooler than the corresponding session at last year’s British Grand Prix. Despite the cool conditions, the riders were still able to evaluate a wide range of tyre combinations and during race simulations in FP4, the soft compound front slick emerged as the most popular option for the riders due to its good balance of cornering and braking performance. For the rear tyre, the medium compound rear slick was preferred by the majority of the Ducati, Honda and Yamaha riders, while the Open-class riders were impressed by the grip and consistency of the soft compound rear slick.

Cool and breezy conditions are forecast for tomorrow’s twenty lap British Grand Prix which starts at 1300 local time tomorrow, with the twenty-minute morning Warm Up session starting at 0930.

Shinji Aoki – Manager, Bridgestone Motorcycle Tyre Development Department: “After a challenging start to the weekend yesterday, the riders were able to make a big step today in terms of setup which allowed them to get the tyres working in their optimum temperature range and this resulted in improved lap times, and more consistent performance.

We revised our front tyre allocation for this year and so it was pleasing to see Ducati, Honda and Yamaha riders on the front row, each using a different specification of front slick tyre in cool conditions. So many different tyre options have been used so far this weekend, but I expect the soft compound front slick and the softer option rear slicks to be used by the majority of the riders for tomorrow’s race.”

Marquez dominates Silverstone qualifying ahead of Dovizioso and Lorenzo