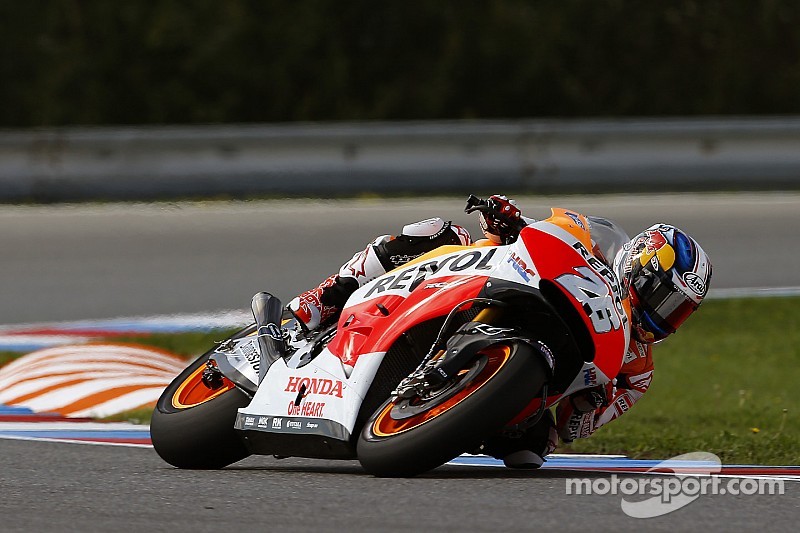 Repsol Honda’s Dani Pedrosa set a scorching pace to take his first win of the MotoGP™ season ahead of the Movistar Yamaha MotoGP duo of Jorge Lorenzo and Valentino Rossi who finished in second and third place respectively.

On his way to victory, Pedrosa set a new Circuit Record Lap of 1’56.027 and kept a fast pace throughout the twenty-two laps of the Brno circuit, and despite a late push from Lorenzo, managed to cross the finish line 0.410 seconds ahead of his Spanish rival. Rossi enjoyed an entertaining battle with Repsol Honda’s Marc Marquez during the middle stages of the race, before breaking away and comfortably claiming the final podium position.

It was a special day for me and my team as we’ve had some tough races so far this year.

In what has almost become a tradition on race day, drops of rain fell and dark clouds loomed as the riders set out on the formation lap, but the rain didn’t eventuate allowing the twenty-two laps of the race to be run in dry conditions. The peak track temperature during the race was 29°C which was 7°C down on the highest reading yesterday.

Although he finished off the podium for the first time this season, Marquez still holds a massive 77 point lead in the standings over his teammate Pedrosa, while Rossi is a further 13 points back and sits in third position overall on the championship points table.

Hiroshi Yamada - Manager, Bridgestone Motorsport Department
“We enjoyed another exciting race at the Brno circuit and it was pleasing to see Dani win his first race of the season in such convincing style, so congratulations to him and Repsol Honda, and also to the Movistar Yamaha MotoGP team on another fine double-podium. Another large crowd was on hand to witness today’s races and with so many exciting battles throughout the field, I am sure they will go home happy. We saw yet another Circuit Record Lap and total race time record set today, which is just the latest example of our tyre development keeping pace with the latest evolutions of MotoGP racing machines.”

Shinji Aoki – Manager, Bridgestone Motorcycle Tyre Development Department
“Today for the race the track temperature was a bit cooler which resulted in some riders switching to softer slick options but overall, the riders chose the tyre combinations that they evaluated during yesterday’s race simulations. Both the soft and medium compound front and rear slicks worked well today with the different riding styles and setups utilised during the race. I am really happy with how our tyres performed at this demanding circuit as not only was there a new Circuit Record Lap set and overall race time record, both Dani and Jorge were able to lap within the 1’56 range for the entire race which shows the very consistent performance of our tyres. After another positive weekend, our technical staff will now shift their focus to tomorrow’s MotoGP group test, the data from which will help steer development of our race tyres for the remainder of this season and the next.”

Dani Pedrosa, Repsol Honda – Race Winner
“The race didn’t happen as I originally planned, Jorge was so strong in the opening laps and he immediately opened a gap, so I had to change my strategy and push to the limit. In the opening laps I could feel my bike was working well and I was able to keep a good rhythm until the end. Only in the final stages I felt I was losing a bit of rear grip and suffered a little on corner exit, but I could manage the gap and win the race. It was a special day for me and my team as we’ve had some tough races so far this year.”