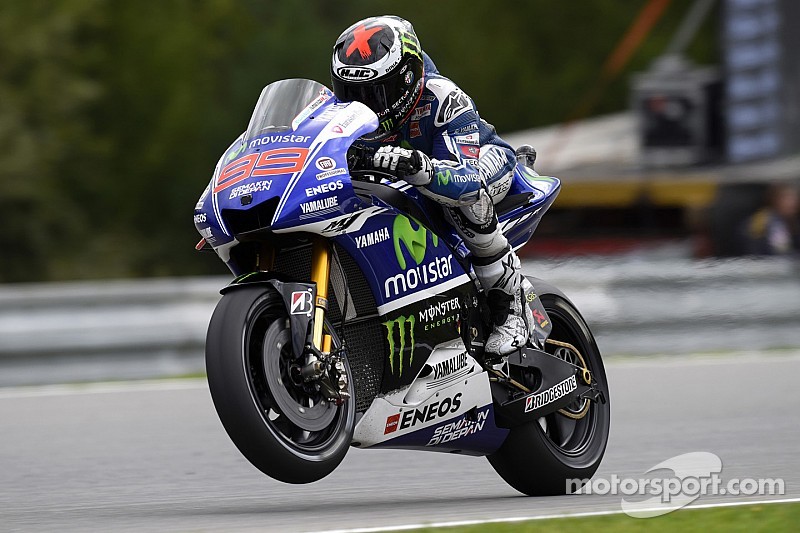 Jorge Lorenzo’s second place keeps him in fourth position in the world standings.

Lorenzo started in his traditional style, pushing hard at the start of the race. The Spaniard had a good start from sixth on the grid and soon passed Bradley Smith and Marc Marquez before plunging down the hill, with teammate Rossi following close behind. What followed next was a flurry of overtaking maneuvers between the top six riders, Lorenzo managing to overtake Dani Pedrosa to start the second lap in third place.

It was a good opportunity for us to win because Marc was not fit enough, but we didn’t plan the race perfectly so we have to learn from this experience in the future.

Lorenzo kept riding aggressively, overtaking the two Ducati’s of Andrea Iannone and Andrea Dovizioso in corner three on the second lap to lead the race and simultaneously brake the circuit record with a 1’56.066 lap. Pedrosa managed to close the gap and, though Lorenzo put up a fight, he was unable to hold off his rival. Lorenzo kept his head down and the pressure on. The last lap saw him inch closer but he came short by just 0.410 of a second at the line.

Teammate Rossi repeated his achievement from Indianapolis last weekend. The nine-time World Champion started his 245th Grand Prix with a bang as he launched his Yamaha from seventh on the grid along the outside of the race track to close right up with the riders starting from the second row of the grid. The Italian soon overtook Bradley Smith and had his eyes on Marc Marquez. He overtook his rival in turn four when the young Spaniard was forced to sit up. Marquez regained a place from Rossi, but was unable to pull away, the two staying close as they passed Andrea Dovizioso and Andrea Iannone.

The Doctor closed back in on lap 12 and made a pass stick on 13. It was now Rossi’s turn to take off, creating a distance between himself and the young Spaniard too big for the championship leader to bridge, giving Rossi his seventh podium finish of the season in third.

Lorenzo’s second place keeps him in fourth position in the world standings with 137 points, 36 points behind teammate Rossi with 173 points who stays third with a 13 points gap to his closest rival.

Movistar Yamaha MotoGP now head to Silverstone in the UK for the The British Grand Prix in two weeks time.

Jorge Lorenzo (2nd / +0.410 / 22 laps): “Finally we beat Marc, but unfortunately it was not me who got the victory this time. I had a chance to get the win because I was feeling good during the warm up and also on the first laps of the race. The only problem was that the feeling of the bike changed after a few laps and Dani caught me. I need to be more aggressive, because he managed to get away. The bike was not so bad at the end of race but I was on the limit to catch him.

If there would have been one more lap I would have been able to try and beat him, but it was too late. I wanted to try and fight for the win, but Dani rode a really good race. It was a good opportunity for us to win because Marc was not fit enough, but we didn’t plan the race perfectly so we have to learn from this experience in the future.

I’m very happy with Yamaha’s work and how they have improved the bike these last few races. I think it will also be a big improvement for other tracks. I also feel very strong physically so if it goes well we can fight for the victory.”

Valentino Rossi (3rd / +5.259 / 22 laps): “I’m very happy about this result, because it was a difficult weekend. Yesterday I crashed and injured my finger. This morning it was very bad when checking the setting also with pain making it difficult to ride. This afternoon I visited the Clinica Mobile for my finger to prepare it for the race. With Silvano (Galbusera) and the whole team we were able to set up the bike and we were able to have a good race. I’m happy. We had a good pace and got another podium.

Unfortunately I lost a bit of time on the first laps because I wasn’t sure, but after I found the rhythm and then it was a great pleasure to beat Marc. He was sliding and had a problem so he wasn’t fast enough. Of course we tried to arrive more in front but the third place was not so bad in Brno because Dani and Jorge rode a very strong race.”

Massimo Meregalli - Movistar Yamaha MotoGP Team Director: "We are very happy to see our performance continue straight on from Indianapolis and again score a double podium for Movistar Yamaha. The result is very much deserved after a weekend of hard work by both Jorge and Vale and the team. It's refreshing to see a different race winner today, a shame it wasn't us but I believe with our current performance our time is coming again. We will now stay here to work tomorrow. We will have two major items to test.

We have the 2015 prototype machine that we will see for the first time. In the morning Jorge will test it and then Vale will ride it in the afternoon. On the current 2014 bikes, we'll also test the 2015 prototype engine as we have one for each rider. I look forward to leaving Brno tomorrow evening with very clear ideas about the direction of the 2015 development.”

Smith powers through to seize 9th in tricky Brno race

Bradley Smith completed the eleventh round of the 2014 World Championship with a hard fought race to ninth position in the Czech Republic after giving his all despite being hindered by traction issues. The British rider began the 22 lap sprint from fourth on the grid after an impressive display yesterday in qualifying which saw him only 0.004 from the front row.

As the race began with 138,000 ecstatic fans trackside to view the spectacle, the British star slipped back to ninth at the end of the first lap but remained determined, quickly setting his fastest lap of the race on the lap five. As the race progressed, he endured a lack of rear traction but persevered to attempt to claw back the deficit to the position in front.

He closed in on eighth place right down to the finish line but met the end of the race in ninth with his resolute performance gifting him further valuable World Championship points to add to his 2014 campaign.

Meanwhile, it was an unfortunate end to a promising weekend for the reigning Moto2 world Champion, Pol Espargaro, as he fell whilst trying to close the gap to the leading bikes at the bwin Grand Prix Ceske republiky. The rookie began his race from ninth on the grid and proceeded to ride rapidly as soon as the race began, running right behind the leading pack by the end of the first lap in seventh.

The 23-year-old Spaniard set into a solid rhythm as he plugged away at obtaining a top five result at the undulating 5403 meter circuit. However, his pursuit was halted on the seventh lap when he unfortunately crashed out, uninjured, whilst in eighth position.

Bradley Smith (9th / +30.364 / 22 laps): “It goes without saying that the result today was much lower than I had anticipated after such a strong qualifying and I was sure that I could ride much closer to the leading bikes. It is a mystery as to why but I had less rear grip compared to this morning and yesterday afternoon. My traction control system needed to work considerably more during the race and I lost a lot of time exiting the corners, plus even when I was coming down the straight the rear was spinning.

This is a frustrating end to the weekend as I know I have a much better pace than what I showed today. I feel we should be in the top six and challenging the factory boys but these things happen sometimes, so now we need to find out why and then get ready as I head to my home Grand Prix where I am convinced I can have a great race in front of my home fans.”

Pol Espargaro (DNF): “I can't hide that I'm disappointed as a crash is never how a rider wants to end a GP, but I still think we did a good job throughout the weekend. Our race pace seemed to be really promising and my start was not too bad as I managed to recover a couple of positions, but the front of the bike felt really nervous and I made a small mistake going straight so I lost some ground on Valentino and couldn't follow the group anymore.

Afterwards Bradl passed me and at this stage I started to feel a bit more comfortable whilst finding a better rhythm, but when I realised that he was opening a small gap I pushed harder and lost the front without any warning. It's a real pity as it certainly wasn’t how I wanted to finish the weekend, but now I have to think about our test day tomorrow as we have a lot of work to prepare and we will try to improve the biggest piece of the package, which is me.”

The GP of Czech Republic saw the NGM Forward Racing rider Aleix Espargaro as first open bike and in eighth position at the finish line.

In front of 138,000 spectators (more than 240,000 in the weekend) the NGM Forward Racing rider gave the maximum on the fast and demanding Brno racetrack. Espargaro fought hard with Bradley Smith and his brother Pol, maintaining a good rhythm despite struggling with the front. With today’s result, Espargaro is back in sixth position in the Championship with 85 points.

It was a good debut also for his teammate Alex De Angelis, who recovered some positions and finally finished in 16th place. Alex was quiet satisfied with his result and he looks forward to tomorrow's planned test day for the MotoGP teams so he can improve his confidence with the new machine.

Aleix Espargaro (8th / +29.621 / 22 laps): “We are the first open bike and I’m satisfied with todays’ result as we did the maximum we could. It was a difficult weekend and the team did an excellent job. We worked a lot on the set up, changing many things and this morning we tested some other solutions. Brno is a very fast track and we knew that we were going to suffer. Moreover, as in Indy, I was struggling with the front, so I’m happy that we could fight with Bradley and my brother Pol. I did the maximum and we got some good points for the championship.”

Alex De Angelis (16th / +1'20.666 / 22 laps): “It’s exciting to be back in MotoGP, this was my first race in the premiere class this year. We improved session after session and tomorrow we will have a day of testing to gain more confidence with this new bike. Regarding the race, I stayed with the group for four-five laps. It was a good start and I aim at improving race after race. I want to thank the whole team, they have done a great job in allowing me to start getting to know this bike.”

How pressure management can win the MotoGP title

How pressure management can win the MotoGP title