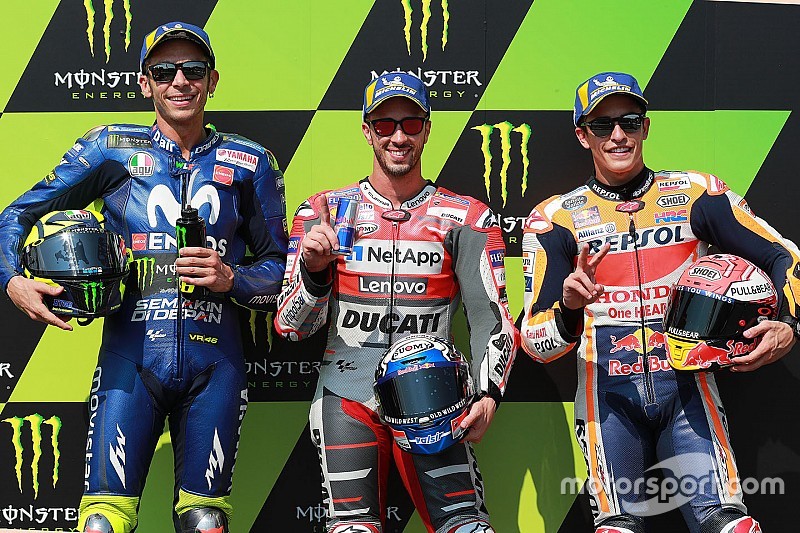 Dovizioso, boasting the latest-spec aero fairing on his Ducati, leapt from eighth to the top of the timesheets on his flying lap after the chequered flag fell, posting a 1m54.689s to oust Marc Marquez from the top of the leaderboard.

It marks the Italian rider's first pole of the season, as well as his first since the 2016 Malaysian GP.

Rossi followed in immediately behind Dovizioso to secure his place in the middle of the front row with a time 0.267s slower than his compatriot, demoting Marquez to third.

It was the other works Ducati of Jorge Lorenzo, likewise with the new fairing, that led the opening runs after a 1m55.059s lap put him nearly half a second up on the opposition, led by LCR Honda's Cal Crutchlow.

But Lorenzo could not make a significant improvement on his second run, posting a 1m55.038s that was soon beaten by Marquez, and then by both Dovizioso and Rossi.

Joining Lorenzo on the second row were Crutchlow and the lead Pramac Ducati of Danilo Petrucci.

Johann Zarco was seventh-fastest on the Tech 3 Yamaha ahead of Suzuki pair Alex Rins and Andrea Iannone, who briefly went second fastest only to then tumble down the order, and Dani Pedrosa's Honda.

Tito Rabat (Avintia Ducati) and Maverick Vinales (Yamaha) completed the Q2 order, the latter perplexingly posting a time three tenths slower than the one that allowed him to progress out of Q1.

Vinales was the highest-profile runner in Q1 and duly commanded much of the session, taking an early lead in the opening runs ahead of the Nieto Ducati of Alvaro Bautista.

Vinales improved again in the latter part of the session to put his Q2 progression beyond doubt, but Bautista found himself ousted by Rins' Suzuki before he fell at Turn 12 trying to better his time.

Bautista was therefore demoted to fourth, with Franco Morbidelli ending up the quickest of those to miss the Q2 cut.

The Marc VDS Honda rider will head up the fifth row, ahead of Bautista and the lead KTM of Bradley Smith.

Pramac Ducati rider Jack Miller also crashed early on at Turn 9, kicking the gravel in frustration, putting him down in 17th on the grid behind the second Tech 3 Yamaha of Hafizh Syahrin.

Honda wildcard Stefan Bradl will start one place behind in 18th, while third Suzuki rider Sylvain Guintoli will line up 21st.

Brno MotoGP qualifying – as it happened