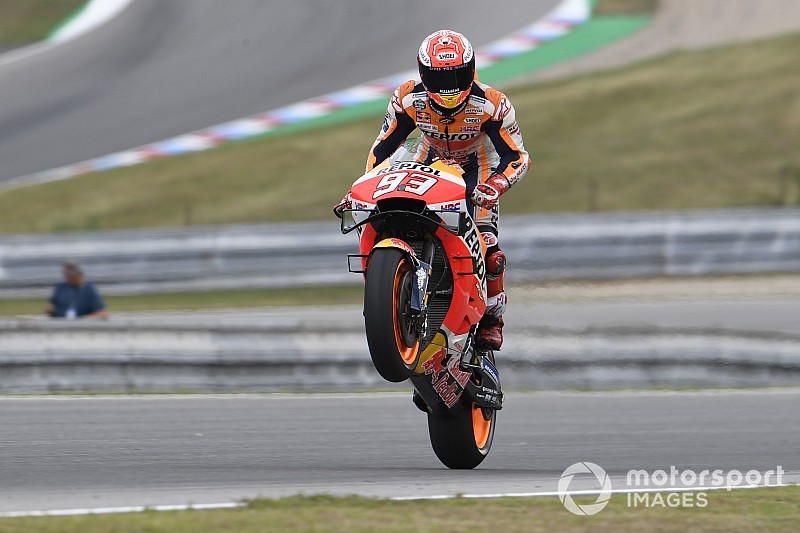 After tackling their first runs on wets in Q2, several riders switched to slicks during the mid-session lull.

Coming out of Q1, the KTMs of Johann Zarco and Pol Espargaro held a shock 1-2 early on and they were two of few riders that stayed on wets until the end.

Their decision seemed to have paid off as it started to rain again during the final few minutes.

But Honda rider Marquez mastered the conditions and, despite running on slicks, he made two massive improvements in a row, ending the session with a 2m02.753s while the rest of the field couldn't break the 2m05s barrier.

Pramac Ducati's Jack Miller was another rider able to improve on slicks but his qualifying ended in a crash at Turn 14, but not before he secured second.

Zarco held on to a sensational third on his first Q2 appearance of the season with his teammate Espargaro taking fifth, sandwiching Andrea Dovizioso's Ducati.

Rins qualified sixth after the Suzuki rider was involved in a controversial incident with Marquez.

On their in-lap after their first runs, Rins aggressively overtook Marquez - the Honda rider came back just before both of them pitted, and then slightly nudged Rins' bike as they were running side-by-side in the pits.

Valentino Rossi did not switch to slicks in the end and was seventh, best of the Yamahas, followed by Danilo Petrucci (Ducati), Maverick Vinales (Yamaha) and Fabio Quartararo (Petronas Yamaha).

LCR rider Cal Crutchlow was the second-best Honda in 11th, 4.3s slower than Marquez, as Franco Morbidelli (Petronas) qualified 12th and last of the Q2 runners.

Zarco reached the second part of qualifying for the first time in 2019, as he and KTM teammate Espargaro locked out the top two spots.

It was Espargaro leading the way early on with a 2m05.344s, with Zarco and Francesco Bagnaia (Pramac) trading second place between them.

Takaaki Nakagami (LCR) temporarily moved ahead of both KTMs a few seconds before the chequered flag but Espargaro responded immediately.

Nakagami was best of the rest, beating Bagnaia by two hundredths of a second, and will head up the fifth row of the grid in 13th place.

Suzuki wildcard Sylvain Guintoli, who impressed in the wet FP3 and FP4 sessions, will start the Czech GP from 15th, ahead of Tech 3 KTM's Miguel Oliveira.

Repsol Honda rider Stefan Bradl only secured 17th on the grid ahead of the top Aprilia of Aleix Espargaro and Suzuki's Joan Mir.

Brno MotoGP qualifying as it happened

Rins: Marquez has "no respect" for other riders