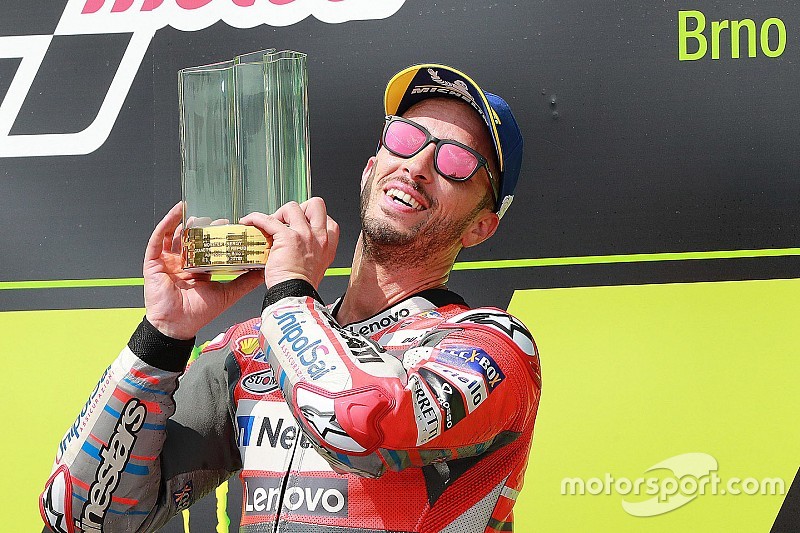 Andrea Dovizioso scored his first MotoGP victory in five months by coming out on top in a thrilling three-way fight against Jorge Lorenzo and Marc Marquez in the Czech Grand Prix.

The Italian led the bulk of the 21-lap distance, during which the threat of rain failed to materialise and the top runners were forced to focus on preserving their tyres for much of the time.

Valentino Rossi made a strong start from second on the grid to lead the pack into Turn 1, but Dovizioso passed the Yamaha rider later on the opening tour to take a lead he would hold until the eighth lap.

As a large group of riders formed up behind the leaders, Rossi took the chance to retake the lead at the downhill Turn 5 right-hander, but he could only hold it for three laps before again succumbing to Dovizioso, this time at Turn 1.

Two corners later, Marquez followed suit to go into second, and on the following lap LCR Honda rider Cal Crutchlow likewise got the better of Rossi to take third place.

Lorenzo then began a late spurt by passing Rossi on lap 13, and three laps later the Spaniard cleared Crutchlow and went on the attack against Marquez and Dovizioso.

On lap 18, Lorenzo found his way past Marquez with a bold move at the uphill Turn 13 left-hander and made an audacious attempt to pass Ducati teammate Dovizioso for the lead into Turn 14.

But Dovizioso held firm, and another failed bid by Lorenzo for the lead at Turns 3 and 4 gave Dovizioso the breathing space he needed to take his first win since the season-opening Qatar race.

Lorenzo and Marquez traded second place on the final lap, with the former getting the upper hand but falling 0.178s short of victory at the chequered flag.

Two seconds further back, Rossi was able to get back ahead of Crutchlow to take fourth on the last lap, while Danilo Petrucci completed the top half-dozen on the best of the Pramac Ducatis.

Alex Rins slumped to 11th place on the second Suzuki despite running as high as eighth.

Completing the scorers some way further back were Jack Miller (Pramac), Franco Morbidelli (Marc VDS Honda), Hafizh Syahrin (Tech 3) and Aleix Espargaro on the best of the Aprilias.

Maverick Vinales' miserable weekend came to an abrupt end on the first lap as he was involved in a three-way crash with Stefan Bradl's Honda and Bradley Smith's KTM. Smith remounted but retired soon after.

Scott Redding also crashed out on the second Aprilia, while Tito Rabat (Avintia) dropped out with an exhaust problem on his GP17 Ducati.