Can Marquez and HRC maintain the edge on MotoGP rivals? 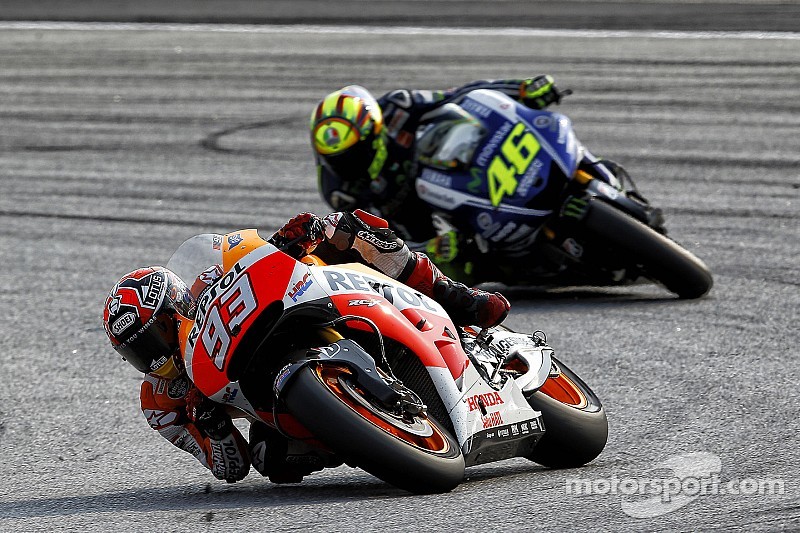 Despite setting the fastest ever two-wheeled lap of the Sepang International Circuit under two weeks ago, Marc Marquez is searching for more improvements on his Repsol Honda RC213V machine ahead of the second three day test at the Malaysian circuit which begins tomorrow, Monday 23rd February.

The main message from the reigning MotoGP World Champion to his mechanics is the need for better edge grip under acceleration to keep him ahead of his Yamaha rivals who are to debut their full seamless transmission at the test.

While Marquez can brake deep into corners and unimaginably turn the RCV on it’s nose with the rear wheel hovering above the ground, the 22-year-old is chasing traction on corner exits.

However, he still ended the three-day test with a scintillating 1m 58.867s lap and was confident of improvements ahead of tomorrow’s test. “It was not a perfect lap, because I think that such a thing does not exist, and I even had a new tire ready to go back out again,” he said afterwards.

The first Sepang test saw Marquez and teammate Dani Pedrosa on top of proceedings in their race simulations at the end of day three but issues with aggressive acceleration leading to diminished edge grip is the area where both riders believe improvements need to be made. Marquez’s Crew Chief Santi Hernandez confirmed the areas where HRC are fine tuning ahead of the second test of 2015.

“The configuration of this engine compared to last year is a little different, especially in terms of the power delivery. The engine is more aggressive, so on the corners and especially on the fast corners it means there are some grip problems when taking the corner. ” Hernandez told Movistar TV in Spain.

While Marquez is looking for improvements and HRC engineers working hard to deliver another race-winning machine for the 2015 season, there are those who believe that the double MotoGP champion will dominate regardless of more improvements.

Speaking ahead of the test, MotoGP commentator Nick Harris said, “In all my years involved in Grand Prix motorcycle racing I’ve never seen anyone with so much potential to amaze us as we see with Marc Marquez. I wouldn’t be surprised if he goes even faster at Sepang 2.”

Meanwhile, the much talked about issue of seamless transmission that has helped HRC so much with corner entry and braking is about to be debuted on the Yamaha YZR-M1 and factory riders Valentino Rossi and Jorge Lorenzo will be hopeful that the new piece of equipment will close the gap on their Honda rivals.

While the expectation is that the full system will be available to both riders tomorrow, Yamaha boss Lin Jarvis was cautious when speaking head of the second test, “What is important with the gearbox is you can’t afford to make mistakes because you are talking about rider safety.”

The spotlight will also be on Ducati and their much-awaited GP15 machine that was revealed in Italy last week. Teammates Andrea Dovizioso and Andrea Iannone already impressed on the heavily modified GP14.3 at the first Sepang test with Iannone ending the test in third overall; the bike will be given a shakedown on Monday before the factory riders get their hands on the new machine on Tuesday.

While fellow factory teams Suzuki and Aprilia will be aiming for better performances from their respective riders after amassing a great amount of data ahead of tomorrow, the satellite outfits will also be looking for further improvements.

Monster Yamaha Tech 3 will be hopeful that Pol Espargaro will continue his vein of form after finishing the first test as top satellite rider and teammate Bradley Smith will be fully recovered from his ankle injury he was nursing last month.

CWM LCR Honda’s Cal Crutchlow is slowly adapting to the RCV213Vs intricacies and will look to improve on his pace with the British rider ‘amazed’ with the amount of braking and lean angle he can use on corner entry while rookie teammate Jack Miller is also adapting well to his Open class RC213V-RS.

The Open class will be also hotly contested with Stefan Bradl taking the top time last time out for the Forward Racing team but chasing the German rider will be a raft of riders including teammate Loris Baz; Drive M7 Aspar’s Nicky Hayden and Eugene Laverty; Avintia Racing teammates Hector Barbera and Mike Di Meglio while Pramac racing’s Yonny Hernandez returns from his shoulder injury.