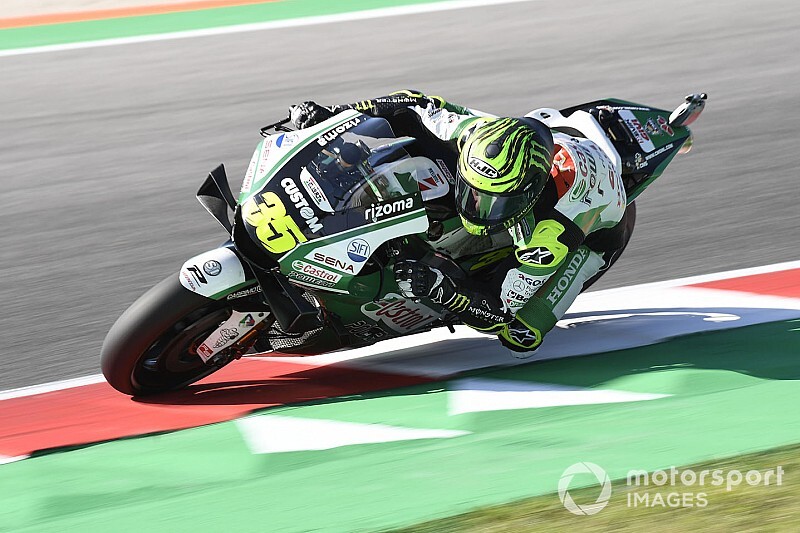 The LCR rider was 1.1 seconds off the pace after Friday’s two 45-minute practice sessions at Misano in 12th overall, having struggled with “no feeling at all” aboard his Honda.

Crutchlow was at a loss to explain his poor form, as he feels the low-grip nature of the circuit should favour him based on recent form at similar circuits, such as the Sachsenring – where he picked up his equal-best finish of the year by finishing third.

“The situation is I’m absolutely nowhere near the top 10, so I’m not overly fussed about Q1 or Q2,” said Crutchlow, who also struggled at the Misano test two weeks ago.

“I don’t have the speed to be worrying about whether I’m in Q1 or Q2 in the morning [after FP3]. I need to be concentrating on improving the bike for my feeling. I have no feeling at all with this bike.

“Here I have no idea what’s going, but I have no feeling with the bike at all, and it’s obvious the bike can go round the track [quickly] because Marc [Marquez] is doing it.”

Crutchlow has been critical of the 2019 RC213V for its difficulty in handling over last year’s bike, and admitted once again on Friday that he felt “more comfortable” on the old bike.

But he concedes Marquez being nine tenths clear in third in Misano practice makes it “difficult” to simply blame the bike for his current struggles.

“It’s easy to say ‘just copy Marc’. It’s not like that,” he added. “It’s not a situation we can just follow Marc’s direction or Marc’s riding style, because you don’t.

“You do your own thing, and at the moment nothing’s working to make me faster.

“I think, honestly speaking, in average lap in general we’re four tenths off, but I feel so bad that getting them four tenths is going to be difficult, and everyone else will improve also.

“It’s also easy to say it’s one tenth per sector, but I can’t just go into Turn 1 and brake one tenth later – it doesn’t work like that.

“I wish it did, but my feeling with the bike this year I don’t feel that. I’m losing half a second in the third sector and my bike’s fast.

“Out of Turn 8 a little, out of Turn 9 I’m losing a ton, which is a fast corner. Turn 10, 11 I’m losing because the bike doesn’t turn. Then on the other hand Marc’s a second faster.

“So it’s difficult to say that I’m losing half a second because of the bike because Marc can do it.”