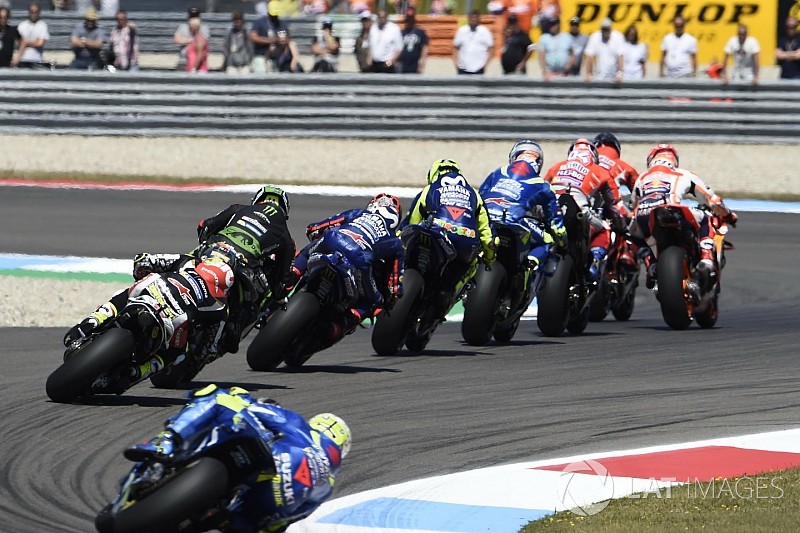 Cal Crutchlow says group races like the Dutch TT are a “disaster” for Honda MotoGP riders, as the RC213V overheats its front tyre and suffers under acceleration.

The LCR rider fought in the large lead group – which at one stage featured eight riders covered by a second – and felt a podium was possible, but had to settle for sixth in the end while Honda stablemate Marc Marquez on the Repsol-backed RC213V won.

However, Crutchlow feels even Marquez would have struggled to win had he not hit the front and broken away, as the Honda “doesn't work” when running in a group.

“It wasn't fun to be in it, I needed to be at the front where Marc was, or behind him in second with a gap of one second,” Crutchlow said.

“Yes, great, it was an epic battle, but with the Honda to be in it is a disaster, because our bike doesn't work when we are in groups.

“You can see the pace of Marc all weekend, he was doing 1m33.0s with his eyes closed, and he's been doing them alone all weekend.

“If he hadn't got to the front, he would have got beat. We can't ride in a group with the Honda. It shakes, our front tyre overheats too much, and as we seen today we're getting beat by Ducatis on power quite significantly.

“Don't get me wrong, my team did a good job and they prepared me a bike that was good enough for the podium and I never made it happen.”

When asked why the Honda suffers in a pack, Crutchlow admits Honda is at a loss as to the reason, and says this has been a problem “year in, year out” for HRC.

He added: “I don't know. Our bike this year is better than our bike last year, that's for sure. You saw where we finished last year; I finished fourth and Marc finished third.

“He won this year and I finished sixth. But, again, we've been competitive at every race track this year, every single track, and we have to be pleased with that.

“If we knew why our bike is overheating the front tyre we'd change it, but it's the same thing year in, year out, and we have to work on it because that's the area we're really struggling to be able to control that overheating of the front.

“You saw, once you get to the front and get some fresh air, it's way, way easier.”