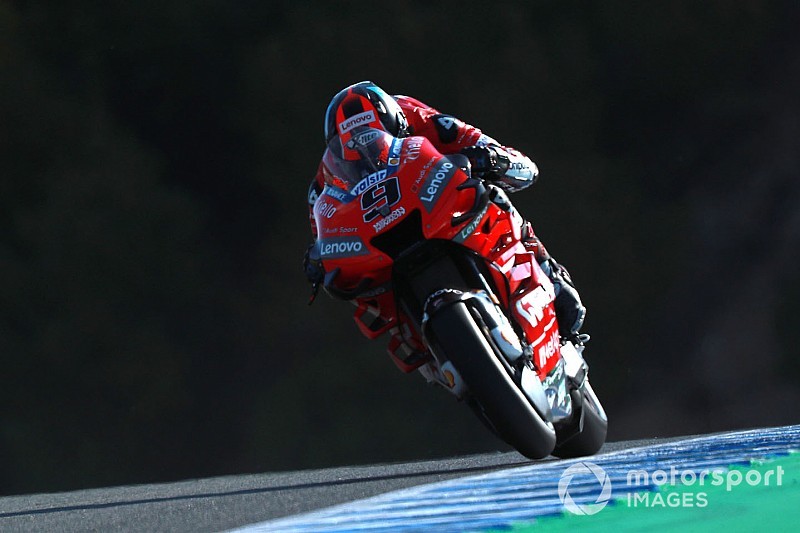 LCR Honda rider Cal Crutchlow claims that Ducati has made a "massive improvement" at Jerez and that Marc Marquez and Andrea Dovizioso look strongest after Friday.

Danilo Petrucci and Dovizioso locked out the top two in Friday afternoon's second practice, with the former narrowly beating Marquez's FP1 benchmark to end the day on top.

Crutchlow, who was closest to the factory Ducatis in FP2, pointed out that tyre wear is always crucial at Jerez, and the fact that Petrucci, who often struggles with tyre management in races, showed good pace regardless.

The Briton said that it is the Ducati GP19 that is allowing Petrucci to keep his tyres alive on a longer distance, demonstrating the Italian marque's "massive improvement" around Jerez.

"Tyre wear is always big in Jerez and it's who can manage or which bike can manage because you have some guys that can't ride from half race distance but now their bike compensate for it," said Crutchlow.

"Guys that have been very poor at managing the tyres, now they are still there at the end of the race because their bike is very good with rear grip, or manages the tyre really well.

"It is hard to know what shape everyone is in, I think Marc and Dovi have the best, Dovi seems to be playing a little bit.

"The Ducati looks very strong because if Petrucci is doing the laptimes he is doing with the used tyres, he's never been one to manage the tyre but he is able to do a laptime.

"It shows they made a massive improvement here at Jerez as a circuit, so the competition is strong this weekend.

"Also the Honda, we know it is strong around here, we know we can be able to fight and all four Hondas being in a competitive position is good for us."

Marquez meanwhile was wary of assuming that the fight will be between only Honda and Ducati, saying that the Yamahas also look strong on track.

"Looks like that two Ducati factory riders are very fast and then also I was able to have good pace, Crutchlow also in the end did a good laptime.

"Even Jorge, especially this morning was fast, the afternoon he struggled a little bit more.

"I never forget Yamaha. I follow some Yamahas today and looks like from behind that they have the potential and they will arrive."

In addition, Marquez praised Honda's efforts to improve the mechanical gremlins he has struggled with this season, saying he now feels "safer" on the RC213V.

The reigning champion commented: "I am very happy today because the problem that we had this three races, okay in Argentina I was able to adjust, but in Austin I wasn't able to adjust.

"Honda team did a great job, especially in Japan they work, and we improve a lot on that area and especially entry of the corner now I feel better, it is more predictable, the engine.

"This is something that helps a lot to be safer on the bike because if not, sometimes I was doing some mistakes that I did not understand and today we are working in a better way."

Lorenzo hoped to be more competitive at Jerez