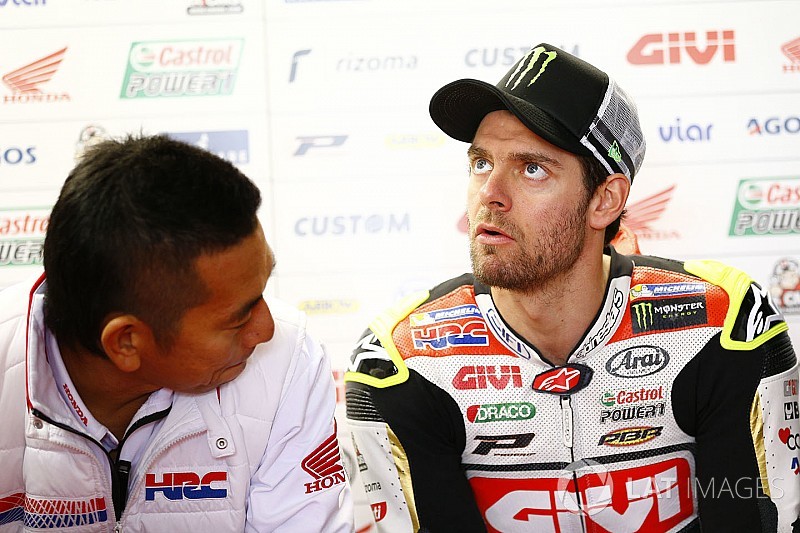 Cal Crutchlow admits he wasn’t sure whether he would race in MotoGP’s Australian Grand Prix after a heavy crash in warm-up he described as “one of the worst I’ve had in a long time”.

The LCR Honda rider fell at Siberia during Sunday morning's wet warm-up session, although he was able to remount the bike and continue, completing the session 13th fastest.

Crutchlow said the impact meant he was not feeling well an hour before the race, jeopardising his participation, although he eventually opted to race and went on to finish fifth.

"Probably one of the worst [crashes] I've had in a long time," he said. "Not the fastest, but I just went so high [in the air].

"I lost the rear on the exit of the Turn 6 [Siberia], I think I just touched the white line with the rear.

"I was basically on the floor and then the thing f***ing gripped and threw me so hard. I landed hitting the incline, I hit my head, hit my back, my ribs.

"I came back immediately with the bike, simply through the sheer adrenaline. And I went back out and went faster. But honestly I shouldn't have gone back out because I felt so bad.

"An hour before the race I didn't know whether I would race, I didn't feel well."

Crutchlow spent the bulk of the race in the leading group, but was unable to progress higher than fifth despite the race featuring numerous lead changes and instances of contact between the protagonists.

"I saved the tyre quite a lot because I thought it would be important, but at the end of the race we were not as good as the others," he admitted.

"At the start I had a 1.5s gap [to the leaders] when I was in sixth, I pushed hard to make it up and I think I used too much of the rear tyre because it was two laps I pushed and two laps from the end it fell to pieces.

"But I think we did a good job. To start 10th, have a bad weekend here, and still finish fifth, I feel good.

"I'm disappointed not to repeat [the victory of] last year because I think we could have without crashing in qualifying. If I'd started from the front row, it could have been stronger."

Gallery: Top picks of the action from the Australian MotoGP