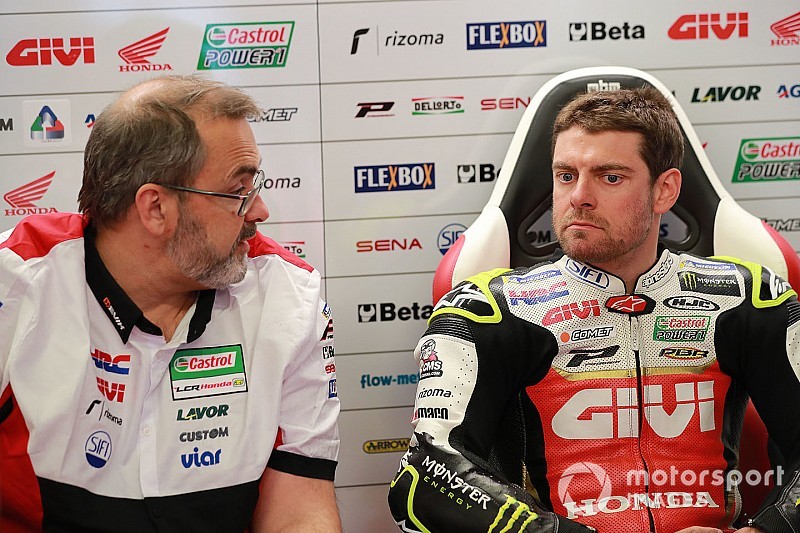 LCR Honda rider Cal Crutchlow says MotoGP riders would overwhelmingly back a change to the “stupid rule” that awards spots in Q2 on the basis of combined times from practice.

The 10 riders who set the fastest laptimes across the three first practice sessions of a MotoGP weekend are awarded byes into the pole shoot-out, with the rest of the pack left to fight it out for the two remaining Q2 spots in Q1.

The automatic Q2 spots are normally decided on the basis of qualifying simulation runs in FP3, but rain on Saturday during this weekend's French Grand Prix at Le Mans meant the Friday sessions proved decisive.

Crutchlow, who ended up qualifying 15th, voiced his frustration at the rule in the aftermath, and said that riders have instead been pushing for FP3 alone to decide early progression to Q2.

“It's a stupid rule, that top 10 go in on combined times,” Crutchlow said. “We've asked for it to be FP3 for a number of years. Just FP3.

“Every time we mention it [in the Safety Commission meeting], everyone agrees. And if the session in Saturday morning is wet, so be it.

“But I think, if we had them two 45-minute sessions, FP1 and FP2, we could work for the race and do settings and do proper laps, do two runs instead of three runs or four runs.

“Yesterday people were putting two sets of soft tyres in free practice one, in case it rains. To me, is not enough. Because we can't work.

“In a [long] lap like Qatar, you do three or four laps, come in, and then you have to put the soft tyre. Then it changes the bike, you don't get the right information. It's really difficult, [but] it's the same for everybody.”

A “standard Honda crash” on his soft-tyre run on Friday had thwarted Crutchlow's chances of advancing directly to Q2, the Briton missing the cut-off by just under a tenth.

And while he was then caught out by changing track conditions in the first segment, having equipped slicks just as rain had intensified, Crutchlow felt it was the Friday crash that proved decisive for his eventual qualifying result.

But while Crutchlow believes a change to the current format has widespread support in the paddock, he is pessimistic about it going through.

“It's not going to change, because the TV companies like the show,” Crutchlow said.

“The situation is the same for everybody, but I believe that most of the riders agree that it should just be FP3.

"Because then it gives us 90 minutes to work, on our settings, on our bike, on our tyre life, giving the information to [tyre supplier] Michelin, and then FP3 you can have four tyres and make a massive show, do what you want, it's like another qualifying session.

“Maybe others feel different but I don't think they do.”