Difference between KTM and Yamaha "black and white" - Espargaro 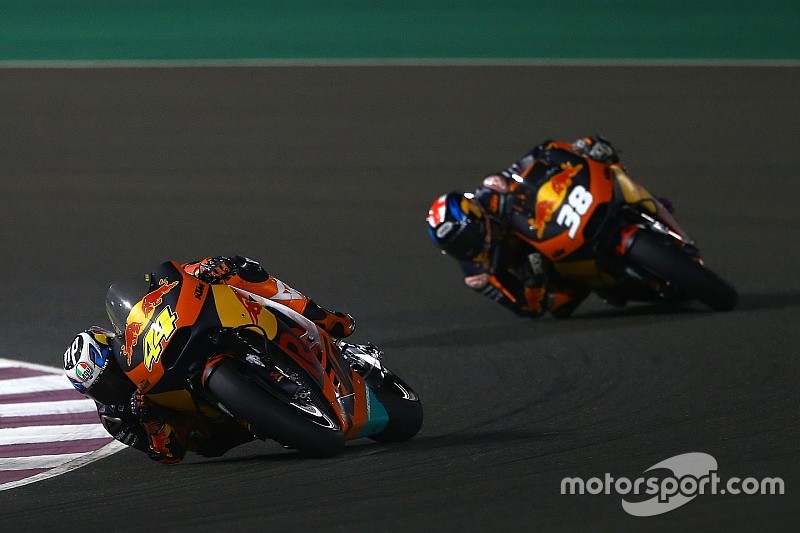 KTM rider Pol Espargaro says the philosophy of the Austrian manufacturer's MotoGP bike is “black and white” compared to the Yamaha he previously used.

Espargaro has joined KTM for its first full MotoGP season in 2017, arriving from Tech 3 Yamaha along with former teammate Bradley Smith.

Both riders have found the RC16 requires a more physical style than the Yamaha that has routinely won races and championships, and are settling in for a long development programme.

The pair finished 16th and 17th in the Qatar season opener, and while Espargaro said the more aggressive KTM suits his natural riding style, it was a definite departure from the Yamaha.

"For me it's much easier to ride this bike than the Yamaha," he said. "The only problem is that we are slow. We are slow even though the bike is shaking, we are not profiting from this.

"With this bike, it's quite different, when you push, you get the laptime. It's not the same as the Yamaha that you need to ride smooth when you want to lower the laptime. The philosophy is black and white.

"This is the beginning, the bike doesn't have a personality still. We are building it. We are going to improve the bike, I think we know what is the character of the bike and we need to improve it."

Espargaro believes both the RC16's steel trellis frame and its screamer engine, both of which are unique in MotoGP after Honda switched to a big-bang firing order for 2017, are responsible for the KTM's unique character.

"It starts from the chassis, for sure it's different because you can not turn as fast as the Yamaha," he explained. "And the engine is so different.

"It looks like this bike is working more in high-rpm and Yamaha is working in low-rpm, they can profit a little bit more from the grip at the beginning of the corner because they push less, stress less, the tyre.

"I don't know if they are changing with Maverick [Vinales], but when I was in Tech 3, it was like this. You have just one line, and you needed to follow it.

"With this bike you have a little bit more freedom, you can ride how you want."